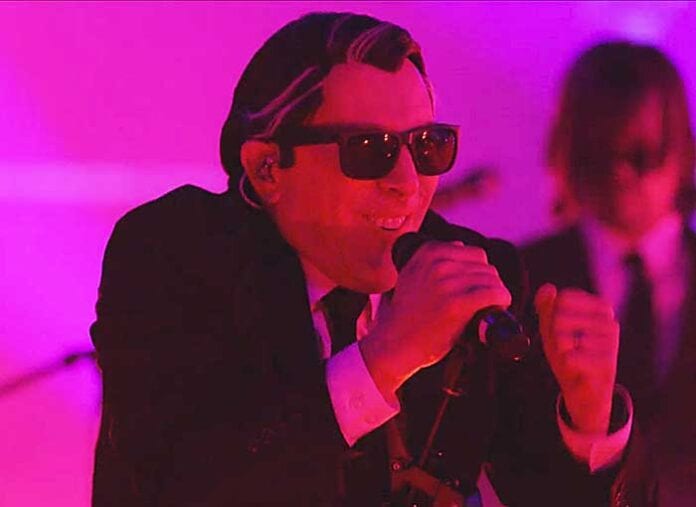 REVIEW AND SCREENSHOTS BY KELLEY SIMMS

Co-produced by Danny Wimmer Presents—known for its massive festivals like Sonic Temple, Louder Than Life, and Aftershock—the Arcosanti performance was wonderfully filmed with multiple cameras, various flickering screens, and cascading stage fog, decorated with a pristine and crisp sound. Dressed in matching black suit and ties with dark sunglasses, the band were perfectly in sync with each other.

The futuristic vibe of atmospheric electro pop opener “Bread and Circus” kicked things off with that special keyboard intro performed by Mitchell on the Fairlight CM IIx computer musical instrument, while the alluring harmonized vocals (and robotic dance moves) of Carina and Maynard were mesmerizing. The infectious electro synth rhythms and hypnotic soundscapes of “Apocalyptical” was next, while the thumping synthetic drum beat, pulsating synth/guitar melodies, and prominent bass lines of “The Underwhelming” followed it. The percolating guitar melodies of “Theorem” and the urgent delivery of “Fake Affront” were both standouts of the night. A couple of Tool moments occurred with Maynard’s vocal delivery on “UPGrade” and “Bullet Train to Iowa,” while mostly the whole sound of the concert treaded in the Gary Numan/Kraftwerk/Goldfrapp/Human League-esque synth-pop territory.

“The Underwhelming” first showed the two vocalists singing from atop of a scaffolding several feet above in the middle of the sectioned off stage quadrants, while closer “Bedlamite” switched locales in the desert as the sun rose over the mountainous landscape with Arcosanti in the background. Although it was pre-recorded and edited, the entire haunting performance was a wonderful cinematic soundscape. Each track was mesmerizing and hypnotic, proving that Existential Reckoning is a fabulous new record in the Puscifer catalog.