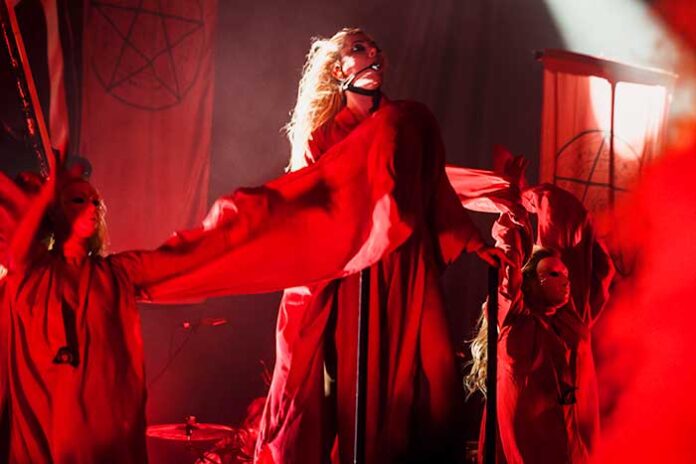 Tours are re-scheduling left and right. Every day a tour is postponing to a later date because of the pandemic, and it still feels like dark days. SoCal rockers In This Moment with co-headliners Black Veil Brides and openers DED were also forced to make this hard choice, but the tour is on and not to be missed. The tour has made up for the lost time by adding more stops on what was already an extensive tour, and we couldn’t be more excited.

Upon arriving at the House of Blues in Anaheim early to grab some pre-show grub, a line was already wrapped around the venue’s complex, full of excited and eager fans. For many, it was their first post-COVID shutdown concert, and this would be a night that everyone could forget the crazy world for a few hours, as the camaraderie between fans was palpable.

The evening began with the Arizona metal band DED. Heavy riffs and melodic, catchy tunes, combined with frontman Joe Cotella’s energy with his bandmates Matt Reinhard, Alex Adamcik, and Kyle Koelsch hooked everyone. The crowd was instantly moving, and many were already fans and singing along. Opening with “Hate Me,” “FMFY,” which had middle fingers waving in the air, the very catchy “Anti-Everything,” and the new heavy hitting track of passion “Kill Beautiful Things” kept the energy going. DED should be on your radar for astonishing metal.

Next up was a band that needs no introduction, the chart-toppers Black Veil Brides. Frontman Andy Black hit the stage while the intro rang out and fans chanted the band’s name, followed by Jinxx, Jake Pitts, Christian Coma, and Lonny Eagleto, leading straight into “Scarlet Cross.” Their fan base seems to be more of the younger crowd, but seeing how Andy and the band connected with fans of all ages, whisking them away for an hour long set was pure bliss.

The set included favorites “Rebel Love Song,” “Faithless,” the new single “Torch,” and “Fallen Angels.” This is one heck of a fantastic set list—songs that are heavy, songs that are slower and more connecting, and everything in between. Jinxx displayed his outstanding violin skills with solos a few times throughout the night. Black Veil Brides is fantastic on its albums, but live is a whole other level. The set closed, and the crowd was cheering and chanting for more. When Black Veil Brides came back out for an encore, the band gave a fond thank you, the massive set was completed, and everyone was more than satisfied after the fantastic show.

Imagine: the house is black. You can barely see the person in front of you, just lights from phone screens. The bass begins shaking the floor, and you can hear the fog being pushed onto the stage. The drums ring out for the opening song “Fly Like an Eagle” (Steve Miller Band cover), and the lights turn on. They are bright white and focused on singer Maria Brink wearing a beautiful tall crown and covered in a white sheet, with her dancers, Randy Weitzel and Travis Johnson, around her, and Kent Dimmel on the drum kit behind them. The song and the band’s performance will send chills down your spine!

The set always seems too short, but includes so many songs that will have every fan grinning ear to ear. “Sick Like Me,” “Blood,” and “Big Bad Wolf” are just a few of the hits you can expect. But no In This Moment set is complete without one song…“Whore,” of course! This song is really where an already phenomenal set is pushed over the top. Giant black and red balloons are bounced around, with confetti flying everywhere, as Maria from her 20 foot stand sings and engages with in her dunce cap with the word “whore” on it. The set wraps, and Maria and the band send out the sincerest thank yous and parting words that might make you tear up a bit.

Everyone left starry-eyed from the wondrous performances they got to see that night before being forced back into the reality of our lives. Each and every band on this tour holds an exceptional place in my heart, and every band on “The In-Between Tour” is worth seeing. It’s been a long time waiting, and it was worth it. The tour is happening now and continues through November 21st.