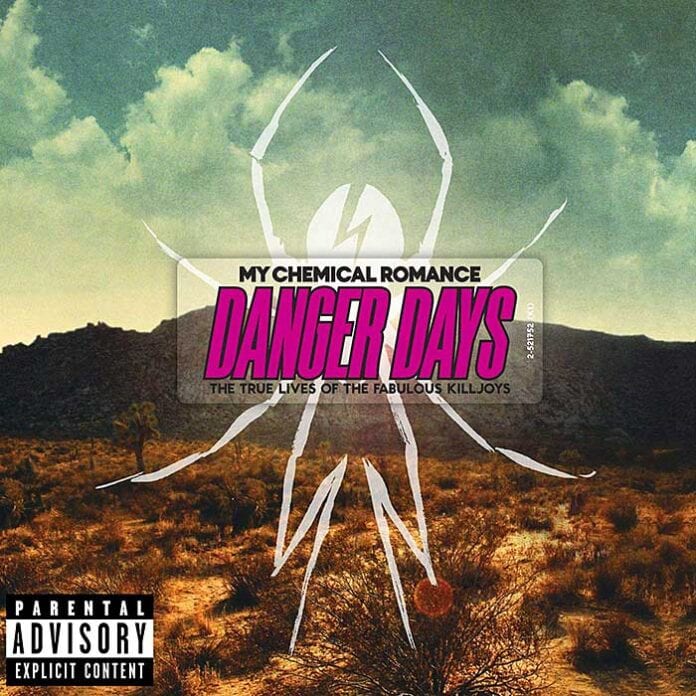 Halloween 2019 seems like a lifetime ago, when My Chemical Romance announced their December reunion show and sent scores of mid 2000s Hot Topic shoppers to emo heaven after a long six years of inactivity. What’s even harder to fathom is the fact that their last full-length outing, Danger Days: The True Lives of the Fabulous Killjoys, turns a decade old this year.

“10 YEARS LATER, DANGER DAYS DESERVES A HELL OF A LOT MORE RESPECT THAN IT GETS”

Danger Days was a fun, colorful romp in the studio, but it didn’t quite nab the attention that Three Cheers for Sweet Revenge [2004] did, and it certainly didn’t attain the legendary status that some reserve for The Black Parade [2006]. Some reviews were downright scathing. “As embarrassing as its title is to type, ‘Na Na Na (Na Na Na Na Na Na Na Na Na)’ is even more embarrassing to listen to,” read the opening line of Jason Heller’s A.V. Club review of the record, a grade of D- for those following along at home (the review did not get any nicer from there).

But 10 years later, Danger Days deserves a hell of a lot more respect than it gets, a collection of 15 tracks that span quite the spectrum, from high energy anthems to soaring, hope filled ballads, all while unfolding a fictional plot that’s as gut-wrenching as The Black Parade but from a narrative perspective, even tighter.

In the fiction of the Killjoys, the foursome teams up with an ersatz John Connor in The Girl (Grace Jeanette) to take on the nefarious Better Living Industries, the requisite Orwellian corporation, whose stark black and white aesthetic is an admittedly not so subtle reminder that “Yes, these are the bad guys.” It doesn’t hurt that Grant Morrison looks like he’s channeling an ultra stylish Count Orlok as BLind’s figurehead.

But for as thinly veiled as the allegiances might be, there’s an unlimited amount of charm in the production design here. The videos for “Na Na Na” and its sequel, “Sing,” are slick and glossy on the cinematographic front, while at the same time looking like they were afforded a shoestring budget in terms of costumes and weapon design (that’s a compliment). It’s Mad Max by way of Back to the Future Part II, in which you can tell the good guys by their clearly plastic neon ray guns, and the bad guys from their dollar store vampire masks. It’s that level of charm that makes the story and the visuals of the album so appealing 10 years removed.

But it’s not all bright colors and Halloween costumes in the land of the Killjoys. The story of the Killjoys’ battle against BLind is one fraught with tension, a fight for individuality versus the drab grays of conformity, as on the nose as it may sometimes be. The aforementioned one-two punch of “Na Na Na” and “Sing,” both in aural and cinematic form, deserves closer inspection on this front.

To call “Na Na Na” an anthem of rebellion is an understatement. A rallying cry as sneering as it is infectious, the song works its way into your brain with its gibberish-laden chorus and refuses to leave for days. Similarly, the video (co-directed by Roboshobo and Gerard Way) is action packed fun, following the Killjoys and The Girl as they gear up and speed down the road, top down, screaming the song at the top of their lungs, smiles on all of their faces even in the face of all-out war. But things take a turn at the close of the video, as BLind and their number one assassin, Korse, kidnap The Girl, ominously telling the Killjoys to “keep running.”

“Sing” picks up where “Na Na Na” left off, with the pair of songs and videos functioning as two halves of the same story, yet still complete polar opposites. Where “Na Na Na” is a gleeful middle finger to those who might stifle one’s creativity, “Sing” is an earnest plea to the home team to never give up that fight, a soulful, at times haunting ballad whose passion is reflected in the video’s bleak aesthetic. Co-directed by Gerard Way and Paul Brown, “Sing” finishes the tale with the sacrifice of the Killjoys in order to keep The Girl (and, in turn, the fight) alive. Where “Na Na Na” is an entire spectrum of color against a wide open desert backdrop, “Sing” is as monochrome as it can be without being straight-up black and white. The former took place on Killjoys turf, but the latter is BLind’s show, with Korse and his Draculoids finally doing our heroes in before their fellow rebels take The Girl into safety (for the inspirational journey to continue in the six issue comic series, The True Lives of the Fabulous Killjoys).

“IT’S IMPOSSIBLE NOT TO LOOK BACK ON IT FONDLY FOR BEING THE FINAL STUDIO EFFORT OF ONE OF THE BEHEMOTHS OF MID 2000S EMO.”

Speaking of the weight of Danger Days, it’s impossible not to look back on it fondly for being the final studio effort of one of the behemoths of mid 2000s emo. Outside of New Jersey, nobody was quite ready for it when “I’m Not Okay (I Promise)” hit the scene in 2004, just like the MCRmy was anything but prepared nearly a decade later, when the band called it quits, making the deaths of the fictional Killjoys hit just a little bit harder and sting just a little bit worse. And while the standard issue Greatest Hits compilations, B-sides, and the like have come out since then, as of this writing, Danger Days remains the final studio outing of My Chemical Romance.

Of course, this would all be meaningless if the album truly was subpar like some reviews asserted, or turned out to be a disappointment to the millions keeping up with the band up until 2010. But the truth is, even after this many years, Danger Days continues to hold up to just about everything else that MCR has put out. It would have been easy enough to double down on the melancholy rock opera that was The Black Parade, but instead we got heart-wrenching power ballads like “Bulletproof Heart” alongside epic earworms like “Save Yourself, I’ll Hold Them Back.” To this day, “Sing” conjures such emotion, it’s tough not to be moved, while “Na Na Na” and “Planetary (GO!)” deserve to be blasted at full volume with every single window down (especially the guitar solo of the former). It’s not the kick in the authority’s balls that was Three Cheers for Sweet Revenge, and it wasn’t the drama kid’s paradise that was The Black Parade. Danger Days was a road tripping armageddon splashed with neon paint and lit ablaze. Danger Days was the good guys sacrificing everything so the next generation could keep fighting the bad guys. And until we hear otherwise, Danger Days was the swan song of My Chemical Romance.