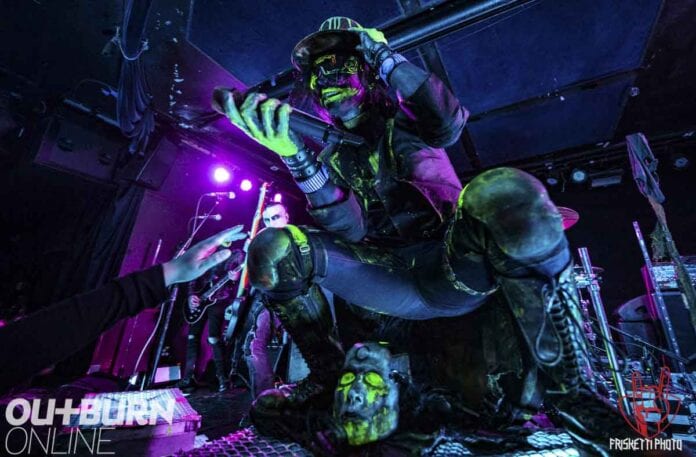 REVIEW AND PHOTOGRAPHS BY ANTHONY FRISKETTI

“Enter the Necrophaze, there’s no mercy for you!”

That quote perfectly sums up a Wednesday 13 show—no mercy. Outburn was front and center for the kick off of the tour. Because this show is the opening night of the band’s month long run with Nuclear Blast label mates The 69 Eyes, no one knows exactly what to expect and the fan’s level of excitement is immeasurable.

Their current live show is a full-blown assault on your ears and eyes. Out of the darkness enters the “Necroshadow”, one of Wednesday 13’s many different stage personas. His face is covered in an expressionless mask and a top hat as he slinks onto the stage with movements as haunting as his lifeless face. As Wednesday 13 is well known for his dramatics, he slowly removes his mask as the audience are now face to face with a with his glowing sunglasses and neon smile. “Let me hear you out there Brooklyn,” proclaims Wednesday 13 as the crowd erupts and the band kicks off day 1 of the tour.

As the title track to the 2019 album Necrophaze ends and the stage fades to black, Wednesday 13 exits ans soon re-emerges wielding a giant knife and wearing a black hood, now dressed as another persona “The Zodiac” for the song of the same name. “Brooklyn, New York, let me hear you scream!” This time the crowd is even rowdier, singing along to the lyrics of Zodiac with horns in the air. At this point Wednesday adds to the theatrics and puts the Necroshadow mask on a pole and slices its throat.

Not slowing down, Wednesday 13 launches into some classics, such as 2005’s “I Want You Dead,” off of Transylvania 90210. Jack Tankersley and Roman Surman’s guitars were just loud enough to cut through the fanfare of the crowd, and Troy Doebbler powers the amazing bass riffs throughout while Kyle Castronovo, the monster behind the kit, kicks off the song before the vocals kick in with the crowd screaming along.

The pace keeps up through the Skeleton’s album classic, “Scream Baby Scream.” Not one to leave the dramatics for too long, enter “Serpent Society” which is, like most, a visually amazing performance.

If you have ever caught a Wednesday 13 show, you already know what a spectacle “Serpent Society” is. Dressed in a cloak, wearing a horned Satan mask, and welding a light up pitchfork, all while drenched in red light, it is quite the sight to witness on stage. “Raise your horns!” as the crowd obeys.

Picking the tempo back up, Wednesday 13 rejoins the stage wearing a mask on the front and back of his head as the band goes into the hard hitting “Prey for Me” off of Condolences. Continuing with the look and sound is another track off of the killer new album, “Decompose.” This is one of the most dramatic parts of the show. Wednesday walks backwards toward the crowd, leaning completely upside down, Wednesday pulls glowing maggots from his brain, eyes, and his skin as it decomposes right in front of the audience.

Before closing out the show, Wednesday quickly leaves and returns to stage with his death hook, as the breaks into the head banging heavy kick off to the Condolences album “What the Night Brings,”.

All in all the show was a perfect mix of songs both old and brand new as well as an incredibly theatrical and visually stunning performance. Do not miss this tour!