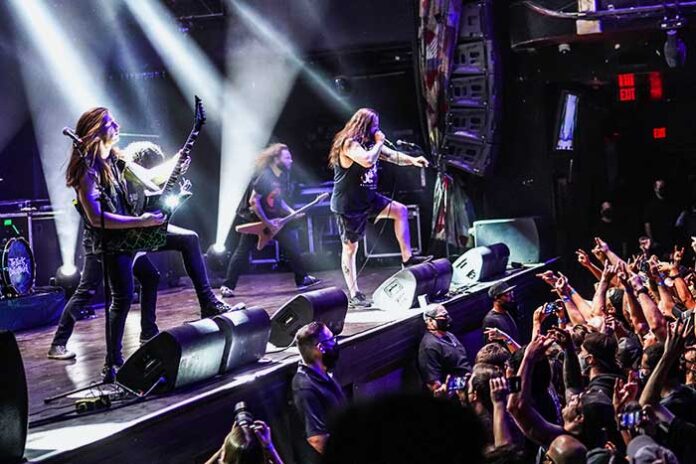 UP FROM THE SEWER: The Black Dahlia Murder with After the Burial, Carnifex, Rivers of Nihil, and Undeath

REVIEW AND PHOTOGRAPHS BY ANABEL DFLUX

The glitzy and glam limelight of Las Vegas, Nevada was interrupted this past Tuesday by the likes of death metal legends The Black Dahlia Murder and their crew of gruesomely brilliant opening acts After the Burial, Carnifex, Rivers of Nihil, and Undeath. Weekdays can often be attendance gambles for concerts, but in the city that never sleeps that certainly wasn’t an issue, as fans filled the House of Blues to the brim in anxious preparation for the evening’s brutality.

The crowd itself is of importance to note. Having been robbed of concerts for well over a year now, the audience was filled with an even more feverous energy than ever before. Even prior to the first act’s appearance on stage, you could easily look around the room and feel the comradery emulating from the attendees. As the evening progressed, each band got all eyes and ears on them from the audience, along with plenty of mosh pits and headbanging galore.

Rochester death metal band Undeath was first up, warming the crowd up to the night ahead. Upon the first step on the impressively large House of Blues stage, the audience roared in excitement. Having released their debut full-length album Lesions of a Different Kind back in October of 2020, touring was a well needed notion to bring the record to life on stage. With The Black Dahlia Murder’s Trevor Strnad lending his talent on the title track, Undeath is no stranger on this run. The band’s passion was evident in their performance, as there was no hesitation upon the beginning of the set or towards the end. The heavy hitting riffs gripped the fans and wouldn’t dare let go, with pits forming immediately upon the first note. Sound-wise, Undeath fit perfectly into the lineup, with a nostalgic old school death metal vibe.

After a brief stage equipment change, Rivers of Nihil hit the stage. With 2018’s Where Owls Know My Name being such a big hit, much of the audience was very well versed in Rivers of Nihil and it showed. This act’s performance and stage presence certainly differed from that of Undeath before them, offering a new flavor to mosh to. The superior technical aspect of their music was also something to note, displaying impressive skill on all instrumental fronts. The power and intensity upon which each band member performed could be felt in the vibration of all your innards, forcing movement. The set ended with a powerful performance of their 2018 album’s title track, a great closing for their time on stage.

With lit pentagrams adorning either side of the stage, Carnifex made a rather theatrical entrance. Quite well known in their genre, Carnifex has a very theatrical and expressive performance style that really amped up the jumping energy in the audience. Pits were an almost immediate creation, with the fans showing no hesitation in absolutely losing their minds to the hard beats. Having just put out Graveside Confessions on September 3rd as the band’s eighth major release, now was the perfect time to begin touring and introducing the world to their intense sound. The set list intermingled new riffs off of the recent album with fan favorites from years past, encouraging the audience to scream along to their favorite lyrics. The stage lighting dazzled the performance, with the pentagrams dimming and brightening in rhythm with the music.

After the Burial came up next, throwing the audience even deeper into rhythmic waves. Noted as having a significant impact on the djent and progressive metalcore subgenres, this journey into the various realms of metal made for a perfectly diversified night. What was especially notable about After the Burial’s performance was the true and sheer appreciation you could see, hear, and feel from the band members on the stage. Anthony Notarmaso expressed his gratitude for being back on the stage multiple times to the audience, and in turn, they heeded his requests to jump and lose their minds to their favorite songs. The venue turned into an endless sea of movement, not a single individual was still. But in the midst of it all, the true comradery between everyone in the venue was made even more evident by this particular performance.

The Black Dahlia Murder was the grand finale to the metal evening, headliners of the tour. Traveling the country in support of their critically acclaimed 2020 record Verminous, these veterans were finally able to perform the magnificent sounds to a live audience. Certainly feeding off of the amplified energy of the fans, the performance was nothing short of impressive. With every individual bellowing out the beloved words of their favorite songs, the set list ran through new hits off Verminous (including the title track) and songs that defined this band’s history. The night consisted of 19 expressive songs, each one forming an even wilder mosh pit than the last. With crowd surfers galore, drone footage of the crowd would have been quite a sight to see.

The variance in vocal range, melodic rhythms, and intense riffs between all five acts of the evening created a near full spectrum endeavor through the death metal genre. Unified by a passion for their craft and exquisite performance, for those whom this show was the grand welcome back to concerts after such a long delay, it was certainly a night to never forget.