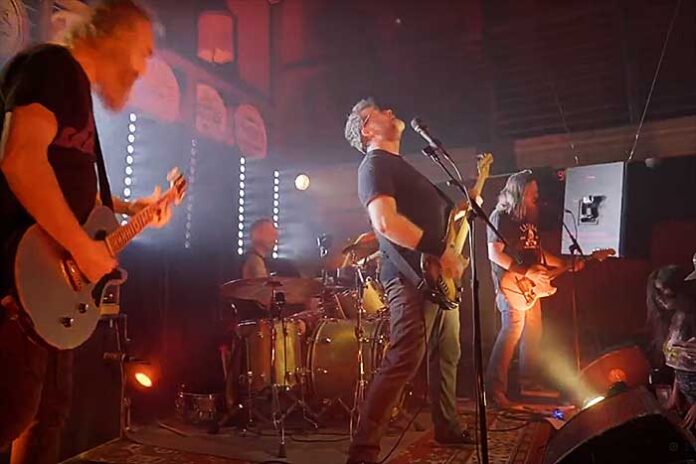 On August 11, Portland rockers Red Fang were the next in line to host a livestreaming event, which was held at Mississippi Studios in Portland. This event was originally planned for an earlier date, but it seems the band had a personal emergency and needed to reschedule. The wait was definitely worth it.

2021 has been a big year for Red Fang so far. The band released its newest album, Arrows, and this year also marks the 10 year anniversary of the album Murder the Mountains. For this livestream, they only played music from both of those releases. Red Fang hadn’t played a show in a year and a half, but you couldn’t tell the difference. The band had as much energy as ever.

Out of all of the recent livestream events, Red Fang’s felt the most organic, as they appeared to have invited a decent crowd to participate. This definitely gave the livestream more of a live show vibe, as opposed to the band performing its set only in front of cameras.

Another aspect that made this livestream feel more natural is that there wasn’t any fancy production, which has become a major trend. With just a few cameras at multiple angles and straightforward lighting, viewers could tell that the sound was recorded live.

The only small glitches were a couple of technical difficulties, such as a black screen for a moment and a few issues with the sound. Otherwise, this livestream most likely made fans miss live performances in person even more.

Something impressive about a Red Fang show is how much energy the band always has, as they play each of their instruments. There was plenty of headbanging and enthusiasm coming from all the members. Even drummer John Sherman was making great faces as he was playing. The stage was small, but there was still plenty of movement from the band members.

Going back to the vibes of the livestream, the band’s behavior was typical of a normal live show. Many past livestream events have looked choreographed or overall pre-planned, but the Red Fang guys played naturally, getting into the music and interacting with the crowd. They were extremely happy to play the show and the audience could feel that.

The crowd was more enthusiastic when the band played material off of Murder the Mountain, especially during the songs “Wires,” “Into the Eye,” and “Malverde.” There was even some moshing going on. The Arrows material didn’t attract as much excitement from the crowd, but that’s how it usually is when a band performs new songs.

Before the set, they had some Red Fang-esque antics. In the beginning, they had an argument with security that wouldn’t let them in the venue and accused them of lying about being in a band.

Once they were let into the show, they hosted a fan Q&A. This was an interesting addition, because the fans had many questions and were excited to talk to the band. The band also appeared to be happy interacting with the fans. One fan had multiple album covers on his wall, and he and the band had a conversation about those albums.

This Red Fang livestream is one of the best examples of hosting a show that reminds fans of actually being at a concert. Without the fancy production and pre-recorded audio, the event resembled more of a stripped-down rock show. Even with the rescheduling of the date and the minor technical difficulties, this was a very successful livestream event.

The future for shows still seems unpredictable, though it’s getting better. If we have more livestream events like this one from Red Fang, then that might be enough to tide over fans until we get back to some sort of normalcy.