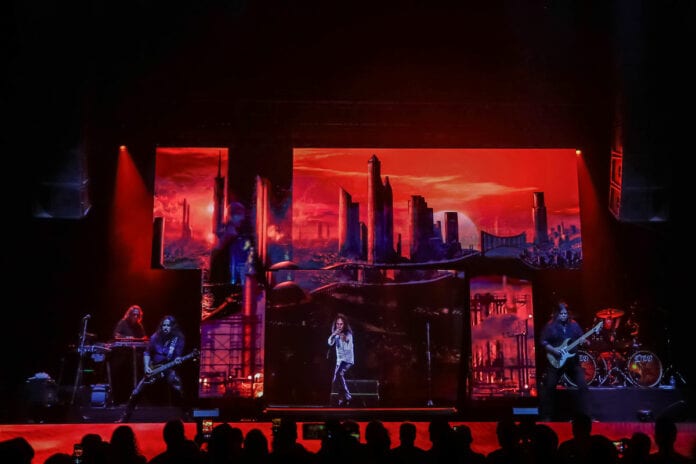 To preserve and celebrate the legacy of one of the greatest vocalists in rock and metal history, the Dio Returns tour features a holographic performance of the late Ronnie James Dio. Without question, the use of holograms in a live show is a polarizing subject. However, in the years since his untimely and tragic death, the legendary Dio has amassed even more fans, many of whom have never had the opportunity to witness his incredible live performance. While plenty of footage exists both online and on video, it’s not the same as being immersed in a live concert. And going in to see Dio Returns, it is with full knowledge that a hologram of Ronnie James Dio will be on stage. If you are expecting the actual presence of Dio in person, know that this is not the same, but it is the only way to experience Dio live today. On June 6th 2019, Dio Returns to the historic Palladium in Worcester, MA.

The Dio Returns tour is not solely fronted by a holographic Dio, but also by the extraordinary vocalists Tim “Ripper” Owens and Oni Logan, trading off on the songs they perform. Owens and Logan are part of the Dio Disciples, which make up the rest of the band—Craig Goldy (guitar), Bjorn Englen (bass), Scott Warren (keyboards), Simon Wright (drums)—performing on the tour. As such, this feels more like a Dio Disciples show than just a holographic performance, so any naysayers of this lacking the energy of a live show are sorely mistaken.

The large video screens, which take up the majority of the stage and background, add more atmosphere beyond just being the gateway to visualize Dio. The show opens with an ominous intro via Ronnie James Dio into the virtual version of himself fronting an amazing live version of “King of Rock and Roll,” with Goldy and Wright to his left and Warren and Englen to his right. With the full band playing live behind Dio’s trademark vocals, it was the perfect kick off to a night celebrating the renowned vocalist.

For the next two songs, they dove right into Dio’s tenure with Black Sabbath, first with Owens taking over vocals for “Mob Rules” alongside incredible visuals for the entire song, and then Logan for a powerful performance of “Children of the Sea.” But make no mistake, this is not just a Dio Disciples show, this is so much more. It is a unique and incredible visual experience, and not just the hologram. Seeing Dio Disciples with Owens and Logan is formidable on its own and is enhanced by the amazing visual immersion happening throughout the entire show.

Dio makes a comeback for a medley mash up of “Last in Line” and “Holy Diver.” His movements don’t always look perfectly fluid, but you’d have to squint and pay close attention to every detail to find much fault beyond a few off sync movements here and there. Having watched the show further back near the soundboard and up close by the stage, the effect is certainly better from afar and straight on. Near the soundboard seemed to be the prime spot to view everything. Being able to view the entire stage, full band, and all the screens is visually superior to being too close up to it, as this is just as much a visual performance as it is an audio performance. And in this rare instance, being further away is more advantageous.

An excellent part of the Dio fronted songs is that each Dio performance is a live recorded vocal performance rather than the album version, which not only gives it much more of a real feel, but also has those medleys he was known for—mixing together multiple songs a few times in the set—and not just the vocal patterns and lyrics directly from the album.

Logan and Owens take on a few more Dio classics before “Rainbow in the Dark” kicks in and Dio comes back on. The hologram is set a bit further back than the rest of the band, so there isn’t any interaction between the hologram and the band until this song. During a good portion of “Rainbow in the Dark,” Englen performs next to, around, and behind Dio, which really makes it seem like they are on stage together. This is the only interaction between the hologram and another member of the band during the entire set, and easily one of the best visuals, as it gave the hologram much more validity as an actual member on stage.

After a few songs, both Owens and Logan sing a trio of songs together, with both vocalists teaming up to make it even more powerful, and there are even a few moments when the two harmonize. After a set full of classics sung by Dio, Owens, and Logan, all three vocalists finally appear together on stage at the end for “We Rock.” The entire band then exits the stage pre-encore, and just like any Dio show of the past, the crowd starts roaring, “Dio! Dio! Dio!” until the chant is broken up by his voice proclaiming, simply, “Neon Knights!” to a loud cheer as the band comes back on stage one last time and rips right into the Sabbath classic with Dio to close out the incredible night.

Despite this being dubbed Dio Returns, or a tour of the Dio hologram, Dio appears in a handful of songs while Owens and Logan take on the majority of the set. If you are expecting a full night of Dio’s hologram, that’s not what this is. Dio Returns is much more of a Dio Disciples show with amazing visuals and, of course, Dio’s hologram. Owens and Logan’s vocals are both incredible, and Dio Disciples have been performing a fitting tribute to Dio for years, but while they are incredibly talented, this specific Dio Returns tour could have used a bit more Dio. For example, “Stargazer,” one of Dio’s undisputed greatest vocal performances of all time is sung amazingly by both Owens and Logan, but Dio should have been a part of that. The part in the show when the bassist plays next to the Dio hologram was visually stunning, but only happened once throughout the entire set while more interaction could have further solidified Dio as more of a member on stage with them. Lastly, having Dio flame/dust into and off of the screen each time his vocal parts started or ended seemed to kill the vibe of pseudo-realism. If the goal is to make this seem as real as possible, maybe he should walk on/off stage from screen right/left instead of teleporting in a dust cloud.

All that being said, as the show improves and technology advances, it’s certain Dio Returns will only get better. More duets, trio vocals, band interaction, and more Dio are hopefully in the future for this amazing show. Dio was an innovator, famously the first to use the devil horns in metal, and while countless others followed, he was the originator, and this tour is no exception as this is now the first full US tour with a hologram. If you are on the fence of seeing Dio Returns, jump off the fence and run to this tour. It’s incredible, and the set list is a perfect tribute to both Dio and the fans who want to hear the best of his vast library of songs from Rainbow, Black Sabbath, and of course Dio.

While you could sit at home and watch past videos, it’s not the same as seeing a live band perform these songs with all the power, energy, volume, and magic of a live show. While this may not be exactly the same thing as seeing Dio live, this is now the closest thing anyone can get to that incredible experience. With Goldy ripping into every Dio classic live, Wright pounding out the intro to “Stargazer,” and Warren creating the atmosphere of each and every song and driving “Rainbow in the Dark,” being surrounded by an enthusiastic crowd of Dio fans is only something you can get when you leave your house to catch this spectacular performance live. So, get your devil horns ready, Dio Returns is on tour now, don’t miss it!