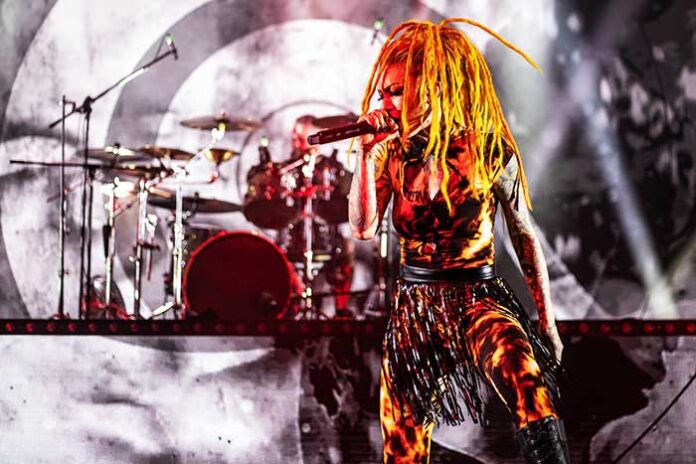 The story of Infected Rain is a true rags to not rags tale of love of music and perseverance against challenges with a few lucky breaks thrown in for good measure. Hailing from the metal anti-hotspot—or cold spot, if you will—of Moldova, which also happens to be the second poorest country in Europe with a Human Development Index that ranks 90th in the world and dead last in Europe, the scrappy band has emerged against all odds to tour the world on the back of five full-lengths such that they were able to host a livestream for an unseen gaggle of fans. This is worthy of a pat on the back at the very least.

The parallel between Sepultura barreling out of economically disadvantaged Brazil in the late 80s to international prominence is an obvious one, but that’s where the similarities end. The internet has made Infected Rain’s journey much easier than anything the Third World Posse had to put up with in the 80s. Heck, it made possible me being plonked in front of my computer on a Friday afternoon watching a band I’d never heard of until a few days earlier play on a soundstage! And musically, while this heavy music quintet from Chișinău is a heavy music quintet, their brand is a decidedly more modernized insertion of classical flourishes, filmic soundscapes, and pop electronica into metal from the nü, gothic prom dress, and djent subgenres led by the vocals of firebrand frontwoman Elena “Lena Scissorhands” Cataraga and her ability to go from delicate siren songstress to caterwauling demoness.

The Devil’s Dozen was a livestream offering to fans sitting in conjunction with a similarly named, excellent, and thorough newly released documentary about the band, their forthcoming fifth album and second for Napalm, Ecdysis, and the fact they’ve spent the majority of the last two years off the road (though they did tour the US earlier this year, opening for Butcher Babies). The setting was a soundstage, presumably somewhere in deepest, darkest Moldova, which had been arranged to look like the epileptic dreams of Metallica’s festival stage and lighting designers. The stage was structured into dual levels, ego booster platforms lined along the front, and top-notch lights and visuals that blasted out different patterns for each song made for a stunning backdrop as the band bowled through 21 songs in a tautly edited and exceptional sounding 90 minutes. All of the above can be paid witness to as the documentary does a great job of weaving in the story of, and footage from, the band’s first 13 years culminating in preparations for the live stream.

Usually, in the case of these livestreams, and in videos in general, quick edits and strobe light effects give the illusion of more energy and movement than is actually happening. Infected Rain act as an exception to this rule as guitarist Vadim “Vidick” Ojog flailed his body around with little regard for safety and his chiropractic future, a massive head of dreads adding to the kinetic discharge. Case in contrasting point, fellow guitarist and bassist Sergehi Babici and his brother Vladimir may be all about the punk rock jumps, leading the crowd at home in clap-alongs and stalking both levels of the two tiered stage, but Sergehi’s short hair and Vladimir’s chrome dome pale in visual comparison to Ojog lunging around like a Ben (The Dillinger Escape Plan) Weinman understudy with his medusa-like dreads threatening to take out eyes, knock down light stands, and upend his bandmates.

As a musical entity, Infected Rain may be stepping into a broader public eye with Ecdysis, but their conglomerate style is crying out for songwriting kinks to be worked out. The band often falls prey to songs disappearing at the hand of disparate sequences and collapsing structures as they transition less than smoothly between subgenres. In a live setting, their heavy reliance on backing tracks is a bit disconcerting, especially when entire layers of songs mysteriously emerge from the ether. This wouldn’t be such a sticking point were it not for the fact that there were moments when the most interesting part of the song wasn’t being played by any of the five folks flipping themselves around the stage. Adding to the inadvertently staidness of their creative output is that outside of the powerful ballads on which Ms. Scissorhands takes the lead on, all their songs roll along at the same tempo. The ballads and Scissorhands in the spotlight moments provided welcome dynamics to both the band’s own dominating homogeneity and an epic length set.

Criticisms aside, many of their fans commenting in the right side chat function don’t seem to concern themselves with this bit of disconnect. And if and when that does become the case, there’s always visual value in watching Ojog battle invisible attackers with his lean frame and instrument. The band has managed to wrangle a healthy fan base and plenty of successes since forming in 2008 with more rabid fans being quick to devote themselves to all things Infected Rain in the on-screen chat, a feature akin to digital people watching, which is not only entertaining in its own right but indicative of an army of supporters backing this band as they take their next steps upward and forward. ~ Kevin Stewart-Panko