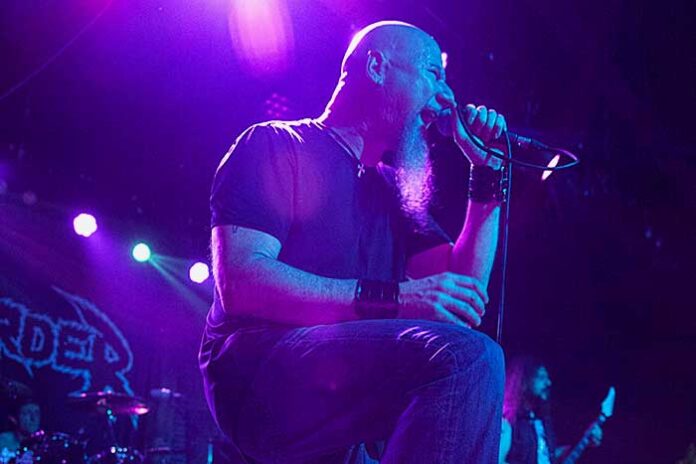 Deciding to take the long, scenic route down PCH and through the coastal cities and the various specialty districts that Southern California is known for, what they don’t tell you is that the coast is beautiful, but the traffic makes accessing anything nearly impossible. I knew what I had signed up for and I was prepared for the commute. I blasted Slaughter at the Vatican at an obscene volume for the nearly two hour journey to prepare for the upcoming show. The numerous drivers that were forced to share a close space with my mobile concert venue in bumper to bumper traffic didn’t fully appreciate the lesson in classic metal.

The opening act was Take Offense, a crossover thrash metal band from Chula Vista, California. As they were setting up for their set, the crowd grew more and more excited. The men standing on one side of me started moshing and thrashing the metal barrier in front of the stage. The men on the other side of me were asking what shots they all wanted, as they were determined to be granted the honor of drinking with Take Offense before the night’s end. I understand completely their fans’ reaction to seeing them on stage—the band had taken a years long break before the shutdowns happened, which then extended their hiatus from performing. They did not let us down. Their set included “Serving My Time,” “Power in Our Hands,” “Awake in a Dream,” “Dousing the Flames,” and “No Tomorrow.”

Exhorder was formed in 1985 in New Orleans and is considered to be one of the most influential heavy metal bands of the 80s and 90s. Exhorder is the type of old school metal that had our parents convinced that we were all on drugs and worshipped Satan, and the world is better for them having been in it. This tour is a throwback to their greatest album, Slaughter in the Vatican (1990), which they played in its entirety. Every two or three songs, Kyle Thomas would tell us “Gather around the fireside, kids,” and he would regale us with a short story of their beginnings and his inspirations.

Stories like how they were repeatedly refused spots on stages at metal venues in the 80s in New Orleans because they were “too ugly and didn’t wear spandex,” so they went over to punk venues where they were welcomed with open arms; or how when Thomas was a child, he made a friend who invited him over for a sleepover, Thomas agreed, and his friend immediately told him his favorite story about a man who had a roommate whom he hated, so he murdered him, and cut into little pieces and buried him under the floorboards but was haunted and driven insane by the sound of the man’s beating heart, scaring the crap out of Thomas, but also introduced him to his favorite, and most influential author, Edgar Allen Poe. Some bands are eternal, and this show proved that Exhorder will never fade or be irrelevant in the world of metal.