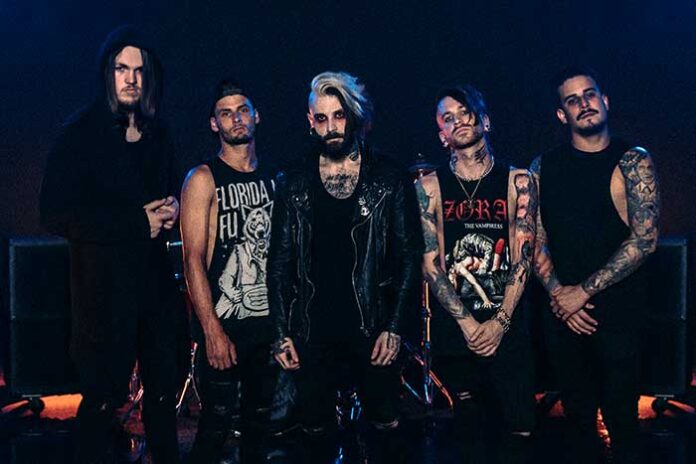 In celebration of the release of We’re Wolves’ high energy rendition of Avenged Sevenfold’s classic track “Unholy Confessions,” featuring Bryan Kuznitz of Fame on Fire, guitarist Jeremy Matthew and vocalist AJ Diaferio tell us their most influential songs, as well as their own band‘s essential songs.

“The year 1986 saw rotating drum kits, pyro at its finest, and over-indulgence to the point of no return. I grew up on this song on cassette, and when it came blazing through my dad’s cigarette stained car speakers, I knew what I heard was the definition of badass. The video to the song shows what a real rock band can do. It showed what I wanted to do. It shows a time when people filled arenas and wouldn’t just gravitate to a more accepting genre. Hard rock made a name for itself and Mötley Crüe still embodies it for the rest of time. Its dark underlining lyrics contradict the explosive audio. To me, that element of songwriting is alluring and it seeped into my own for years to come.”

Avenged Sevenfold “The Beast and the Harlot”

“Here’s another song that when you hit play, red and blue lights magically appear behind the ass of your car. Left and right-handed guitarists play in perfect harmony with roaring vocals. What more do you want? This was a huge eye opener for me. When A7X hit the scene in the early 2000s, it made me stop caring about school. I got heavily involved with obsessing over guitar. My old guitar teacher probably still hates me for only wanting to learn Avenged’s songs every session. I like adrenaline.”

“As far as super bands go, I don’t really care for them. My only exception has been smacking Scott Weiland together with Slash from Guns N’ Roses. One of my main guitars is a Slash inspired 50s Les Paul Standard. I like how this band always took the edge from their prior bands and created a modernized masterpiece. It’s the best of the 80s and 90s rock world that I obsess with in one killer package. RIP Scott Weiland.

“If you don’t sing this song when it comes on, you’re a liar. I’m a sucker for killer melodies, and Backstreet Boys have the best ones on earth to me. A song is nothing without its melody no matter what genre. I grew up when this song was getting big, and it’s always going to hold a place in my heart. Backstreet Boys or some relative pop band are every metal fan’s dirty little secret. Not mine. That makes me larger than life.”

“This song grabbed a hold of me when I was a kid in 1998. The music and video were so captivating, spooky, infectious, and fun. The full album to this day is always on rotation in my life. Rob Zombie is a god.”

“You can’t deny that this is a badass song, even non Metallica fans can agree. It demands attention the moment you put it on. This is one of those songs that when it comes on I have to finish it.”

“This was the first time I ever heard a song be so in-your-face heavy and have such a massive hook. This entire album changed the shape of metal, and to this day we’re all still trying to sound as badass as Slipknot in 1999—not to mention their theatricality is unmatched.”

“This is one of those songs I’ve been listening to my entire life. This song is ingrained in my system and still plays a major role in my love for gang vocals. It’s a full throttle rock anthem with bite, angst, soul, and hooks galore. Mötley Crüe is a staple in our band. We’ve been known to bust out covers for fun at practice. Maybe this one will make it to the streams in the future.”

“This was the anthem of my childhood angst, hence why we chose to cover this song. Love them or hate them, Limp Bizkit made an impression on all of us and withstood the test of time. This song taught me the value of just going for it. I always try to push new vocal styles into our music because of this song. Fred Durst is one of those guys who just puts his persona and stamp on everything he touches. I still jam Significant Other on a regular basis.”

“We can’t explain how this song blew up. All we know is this is the first song we ever wrote that anyone gave a shit about. This song was our “fuck you anthem” of 2018, and it still continues to find new fans. This is a We’re Wolves must. Plus, it features our good friend and producer Bryan Kuznitz of Fame on Fire.”

“This cover of Limp Bizkit continues to find people. It has reached almost two million on YouTube and almost one million on Spotify. This was the first thing we ever put out and it has become what we’re best known for in the world of covers. We love it, people love it, and I’m sure Limp Bizkit would love it if they got to hear it. Plus, the comment section on YouTube is worth reading cause it’s wild.”

This was our chance to try something new with our sound. This was an opportunity to make our band more than just some metalcore band from South Florida. This song has a lot of groove and soul to it. It’s the perfect song to enjoy with a lover and to show someone our band that might not be into our heavier stuff. Plus, the music video is beautiful and creepy.

“This Drowning Pool cover was fully recorded start to finish in three hours in the middle of the pandemic. Somehow we made magic on this cover and it has blown up quite a bit on Spotify. We play this cover a lot live and it’s just such a fun song.”

“This song is the first thing we’ve put out in almost three years that was an original. We knew instantly that this song was the bridge between the EP and this new album. This song is a wild ride and the music video is badass. If you like horror movies and metal, check this bad boy out!”

“We are major Avenged Sevenfold fans, and so is our producer Bryan. So naturally we all knew at some point we would do a song of theirs together. Having Bryan Kuznitz of Fame on Fire featured on this was just the perfect cherry. If you love A7X, you won’t be disappointed by what we cooked up for you.”