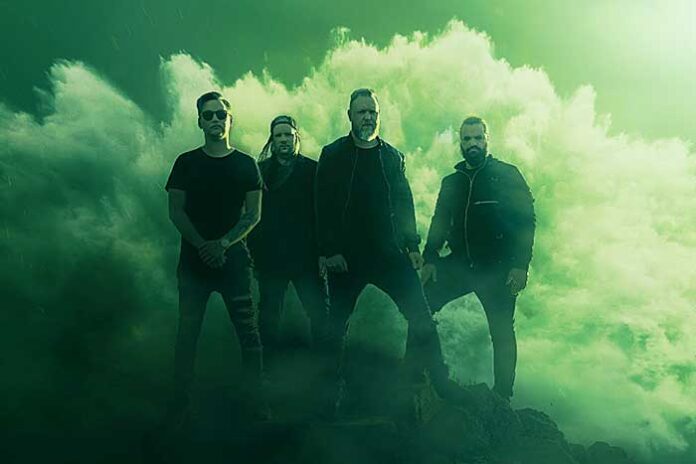 Swedish four piece EYES WIDE OPEN has dropped their new album Through Life and Death via Arising Empire. The album is available on CD, colored vinyl, and special bundles via Impericon and EMP. Through Life and Death hits like a juggernaut and carries the torch for the Swedish melodic death metal scene, all the while mixing in modern sounds and metalcore inspired influences.

Guitarist Kristofer Strandberg tells us the songs the band has been influenced by and Eyes Wide Open’s essential songs to hear.

STREAM OR PURCHASE THROUGH LIFE AND DEATH

“Disconnected” was a song that got the band together back in the day. We all really loved In Flames and at that time the album A Sense of Purpose was pretty new on the market. I think if you listen back to our old stuff, you can hear a lot of In Flames influences.

Metallica and especially Master of Puppets was the band and song that got me in to metal. Just love all the heavy riffing while still keeping the catchiness. I remember back in the day sitting at home in my room watching skateboard films and listening to “Master of Puppets.” Great times!

This was the song that got me into the heavier and faster kind of metal. Just love the D-beats. When creating fast Eyes Wide Open tracks I always think back to this one. This is definitely prime thrash metal to me!

ARCHITECTS “A Match Made In Heaven”

Erik (Engstrand, vocalist) showed me this song when it came out and I remember we were both blown away by it. Their riffs are so headbang friendly! Architects was one of the bands that really made us want to incorporate more core influences in our music.

BRING ME THE HORIZON “Sleepwalking”

I remember Jesper (Lindgren, bass) showed me this track when we recorded our first album Aftermath. I couldn’t believe this was Bring Me the Horizon. I wasn’t really a fan of their early stuff, but after this album (Sempiternal) they became one of my favorite bands. I think this song and the rest of the album has all the elements I want in a metalcore song.

“Black Clover” is one of the tracks that shows what Eyes Wide Open is all about! It has both the fast and heavier parts, but also the clean vox and softer stuff. This is definitely a good track to start with!

This is our most played song of all time, which you really can see live, cause this is the song everyone is singing along to. It’s also one of the songs that I’m most proud of.

This feels already like a Eyes Wide Open classic. It really shows the development we have made on our new album. This is also the first album with our new drummer Lucas (Freise), and he really upped his game on this song!

This is one of our catchiest and most live friendly tracks. What’s special about this track is that it features our Patreons on backup vocals. They sing the “sing-along part” in the bridge.

This song has a heavier subject and talks about losing someone close to you, like a family member or friend. This song we have dedicated to our friend and one of our first fans, Silas, who sadly passed away last year—way too early.