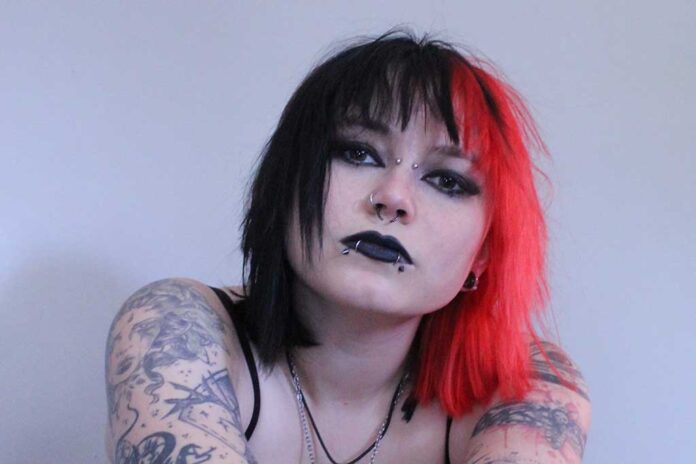 Drawing on influence from garage rock and punk, both contemporary and throwback, Hex Poseur’s dynamic and gripping new EP Hearsay is being released on July 15 via Manic Kat Records.

Discussing the new collection, Poseur explains: “The recording process was intense, chaotic fun, which fueled the energy I needed for the songs. This carries through in the songs which feel like an explosion of frustration, anger, energy and some humor. Being signed to the label has felt like an amazing opportunity for me as an artist,” explains Hex on joining the Manic Kat Records roster. “It’s also helped give me a drive and real focus for my music.”

Here, Hex Poseur gives us insight into each of the five songs on Hearsay track by track.

“Bright Ideas” is the oldest song on the EP, as I wrote it when I was 18 and in my first year of university.  I think it is obvious my style was very different then and I was still figuring myself out. This song reflects my struggle with figuring out what kind of music to make and what topics to write about. At my university I felt I made music which was largely unlike most other people’s in the area, which made me feel quite insecure and isolated. I learnt also that a lot of the music scene was more of a popularity contest, which was not something i was really interested in. It also reflects some of my own anxieties about growing older and I think this is personified in the dark tone. I was playing around with time signatures and this is one of the first ones written in 3/4, which ended up giving it a kind of dark folk-y feel.

“Gentlemen” is definitely the most upbeat song on the EP. It’s the lightest in tone yet I think still has a strong message. The lyrics are very tongue-in-cheek, poking fun at the idea of traditional gender roles and the old-fashioned stereotype of a ’gentlemen’. While the ’gentlemen’ may be the archetypal perfect man,  he also brings with him old fashioned sexist attitudes. People today who label themselves as ’gentlemen’ often seem to reflect these same attitudes, and aren’t actually as chivalrous as they may want to appear. This song always goes down well with the crowd, because it’s high energy and a lot of fun. The hook seems to stick in people’s heads, so it’s often a fan favorite.

“Gimme Something Better” is sort of my tribute to grunge music. It is largely inspired by Nirvana, who are one of my favorite bands,  with the quiet-verse-loud-chorus kind of structure. The feeling of the song is quite steady and has a bittersweet tone, which reflect the lyrics.  The lyrics come from a place of confusion and frustration caused by leaving school and slowly becoming an adult.  It’s a very strange and difficult time for everyone.  At university I felt that among middle class young people there seemed to be a general feeling of dissatisfaction and boredom, and lots of fear and anxiety about the future.  Many people seem to fill this void with drugs, and that’s what this song is mainly about. My frustration with the idea that life is just dull and you can take drugs all the time to make it easier or more exciting. ’Gimme Something Better’ is literally me asking for something more in life and not wanting to succumb to a kind of intoxicated monotony.

“Scum” is the song I’m most proud of writing and I think has the most raw,  visceral sound. The main riff emerged from me playing around with different tunings,  specifically one used by Queens of the Stone Age. The lower tuning makes the song instantly sound very dark. The lyrics for this song are difficult to misinterpret, being purposefully in your face and confrontational. The lyrics follow the story of a teenage girl who is assaulted at a party but is not believed due to the rapist having a good reputation and being popular. This is an uncomfortable topic but very pressing,  especially with lots of allegations coming out about real musicians in famous bands.  It is highlighting how this kind of behavior was often brushed off in the past and how many people get away with these kinds of things.  Every time I perform this song, it makes my body shake all over,  and when I am screaming at the end it is fueled by genuine rage and disgust.

“Violent Little Things” is largely inspired by modern day punk bands in the UK, with an element of sludgy stoner metal at the end. This song is fast paced and has a sense of urgency but dark, interspersed with slow, dramatic sections. The lyrics discuss attitudes towards violence and how some people use violence to gain power over others. It speaks about this in general, but while writing I was largely considering this in regards to toxic masculinity. It also discusses violent people (both fictional and real) who are idolized and obsessed about by regular people and how killers are sometimes treated like celebrities. The last section is supposed to resemble a kind of tribal chant or incantation, reflecting the hypnotic effect these people often have on their followers.