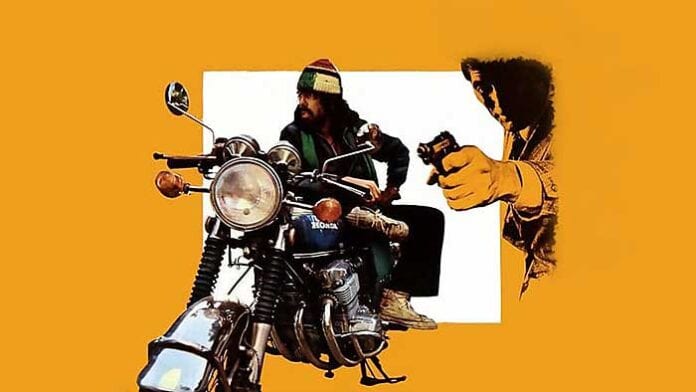 The Eurocrime game rolls on with this Blu-ray Mediabook from Cineploit, this time from a director who wasn’t exactly known for hard-hitting action cinema.

Bruno Corbucci was the brother of noted spaghetti western maestro Sergio Corbucci, and enjoyed a fairly fruitful career that saw most of his success come from broad, slapstick comedy. In fact, the character in this film, Inspector Nico Giraldi, is often credited as one of the reasons why the visceral impact of Eurocrime genre diluted so much with humor over the years.

You see, this was a genre that’s received a lot of attention for its violence, but also for themes that some may construe as fascist, these black and white ideas about what’s right or wrong in the eyes of the law. The Nico Giraldi films employed more and more slapstick as actor Tomas Milian leaned into the character as sort of parody. This wouldn’t be the only time Milian did this, either, as exemplified by his “Monnezza” in some other movies in the genre, but the actor would appear as Nico Giraldi in no less than 11 films.

Squadra Antiscippo is better known in the states as The Cop in Blue Jeans, where it’s dwelled as a public domain staple for many years since its original release back in 1976. The film often shows up on budget DVD sets, usually with a big photo of co-star Jack Palance plastered on the box, despite the fact that Palance actually doesn’t have a lot to do with the film. Oh sure, Jack is still the film’s heavy, but he only really appears in a few scenes to move the plot along, presumably only as long as it would take to cash his check.

Corbucci’s film is probably the most strictly “traditional” of the Giraldi series in terms of tried and true Eurocrime action. There’s still some grit and style to the picture, as Giraldi uses everything at his disposal to try and break a ring of purse-snatchers assaulting the local populace. There’s a bunch of in-jokes to the more well known American crime films of the day, as Nico has a pet mouse named “Serpico” and a bird named “Inspector Callahan,” not to mention the shameless Pacino posters hanging in the cop’s apartment.

There are some great bike stunts to be had here, which is part and parcel for the Eurocrime genre, and the pacing is quick enough to serve as a good primer for those who are curious to see where these films were headed near the tail end of the 70s. Just as the spaghetti westerns saw their twilight years as the 60s dawned into the 70s, so too did Eurocrime seem to deal almost exclusively with comedy by the time the 1980s rolled around.

Cineploit’s Blu-ray for The Cop in Blue Jeans improves upon the film’s public domain prison in a major way. There’s a lot more detail to this 2K scan, especially when it comes to the darker scenes. There’s a sequence in a nightclub, for example, where we’re able to see that Tomas Milian seems to have autographed the hat Giraldi is wearing as he’s interrogating a suspect, breaking the fourth wall in a fun way. The English dub does seem to be incomplete here with regards to some of the background dialogue, but this might be the film itself, and not the transfer. There’s also Italian and German audio options, together with English and German subtitles. The audio is mixed well, without any noticeable dropouts, letting the great music from Guido and Maurizio de Angelis do its job with one of the duo’s more underrated main themes.

Extras include a look into the original dubbing process with Milian and Corbucci, as well as a German trailer and photo gallery. The most extensive feature is a career spanning interview with Milian’s co-star in the film, John P. Dulaney. Although Dulaney isn’t credited in the film, he actually had an interesting and lengthy career as a character player in Italy and beyond. John talks directly to the camera and discusses even the most obscure entries from his filmography. The feature as a whole was unexpectedly insightful and a cool look into the life of a character actor.

A 28 page booklet rounds things out for what’s yet another solid restoration from Cineploit, saving The Cop in Blue Jeans from its undeserving home in grey market hell, back to life with kick ass picture and sound. ~ George Pacheco