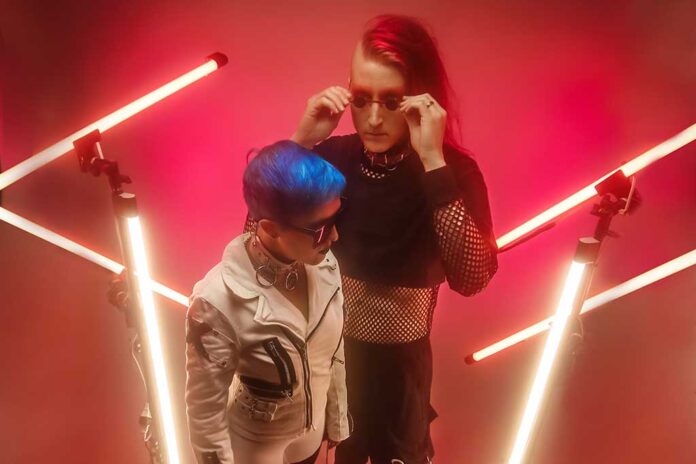 WATCH THE EXCLUSIVE PREMIERE OF THE NEW SINGLE AND MUSIC VIDEO “FUTUREBLIND” FROM BRIGHTER THAN A THOUSAND SUNS ONLY ON OUTBURN.COM

Making their debut at FiXT as well as the upcoming FiXT: Radium compilation, Brighter Than A Thousand Suns drops their industrial single “FUTUREBLIND” (Aphantasia) with an official music video for the world to take notice of.

The video is filled with 80s aesthetics, bright colors, and lines reminiscent of synthwave, fitting perfectly with the gaming vibes of the single. The track is a pulsing anthem for anyone whose creative talents have been stunted and a push against conformity. Defying genre boundaries, Brighter Than A Thousand Suns fuses synths, syncopated rhythms, distorted electronic vocals, and a haunting vocal performance with provoking and thoughtful lyrics for a defiant industrial with synthwave undertones soundscape.

“‘FUTUREBLIND’ is about elitist genre gatekeepers who are cemented on traditions to the extent that they can’t envision a future without them and thus actively try to disable any meaningful artistic evolution,” says Brighter Than A Thousand Suns. “Such a community of arrogance doesn’t create an inspiring environment – it merely manufactures obedience. This song serves as something of a battle cry for any artist who’s ever felt their creativity stifled as a result of feeling pressured to conform to their genre’s more predictable patterns.”

“FUTUREBLIND” (Aphantasia) is the debut single from the upcoming second volume of the FiXT: Radium future rock compilation, set for a 2023 release. The compilation will feature tracks from several FiXT roster artists including Raizer, Richy Nix, and Fight The Fade.

“FUTUREBLIND” (Aphantasia) is out now from independent multi-genre label FiXT.