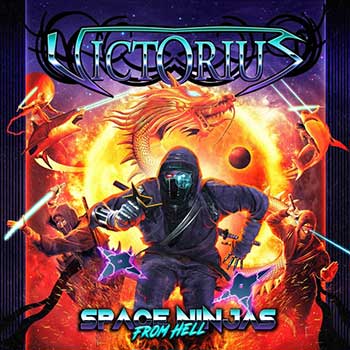 From deep in the age of prehistoric dinosaurs comes VICTORIUS—saving the world from an alien invasion—and the battle continues, when evil Ninjas from outer space are on their way to invade the world! Alongside the holy dinoforce these five madmen play Jurassic Power Metal, using lots of high end technology and laser cannons and will not surrender until the last Ninja is beaten!

“Finally a new chapter begins! After the holy war between aliens and dinosaurs a new intergalactic adventure awaits! Together with producer Lars Rettkowitz we forged a new masterpiece of German over the top Power Metal in the blazing fires of the sun, aka Emperial Sound Studio Cörmigk! Evil ninjas from outer Space are on their way to take the world by storm, and we made the soundtrack for this glorious happening! Be prepared for 13 anthems about ninjas and samurai – mixed with knowledge we have from silly kung-fu movies! Mastered by Henrik Udd (Powerwolf, Hammerfall) you can expect the next level of the typical VICTORIUS sound as well as an amazing artwork by Stan W. Decker! January 17th!!! Napalm Records!!! Mark the date, sharpen your laser katana and brace yourselves for the great cosmic NINJAWAR!!!”

Get a glimpse of what to expect and watch “Twilight Skies”