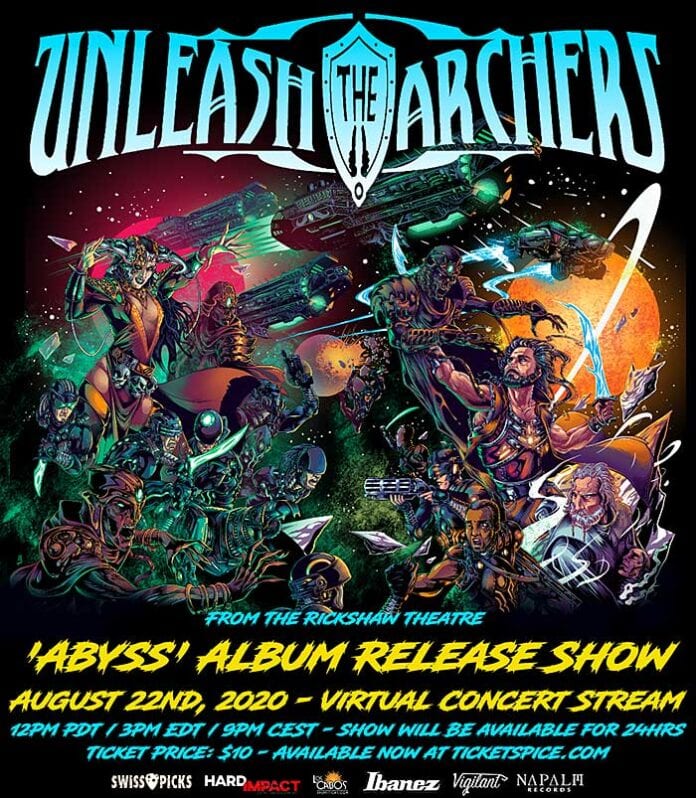 Canadian melodic power metal quartet UNLEASH THE ARCHERS will release their masterful fifth full-length concept album, Abyss, out August 21, 2020 via Napalm Records. With Abyss, the band re-cements themselves as an unequalled, undeniable metallic force with their strongest album to date!

Lockdown got you locked up? UNLEASH THE ARCHERS would never leave their diehard fans hanging! The band is thrilled to announce their official Abyss virtual album release show, exclusively streaming on Saturday, August 22 – just one day after the album’s release! Witness the band perform tracks from Abyss and other fan favorites straight from Vancouver venue The Rickshaw Theatre.

The streaming event will take place at 12pm PDT/3pm EDT/9pm CEST, and will be viewable for just $10 via a virtual ticket, available to purchase now HERE. Viewing instructions will be provided to ticket buyers upon purchase, and the stream will be available for 24 hours after the initial show time. UNLEASH THE ARCHERS fans – don’t miss this!

Frontwoman Brittney Slayes says: “We are so excited to hit the stage again! Even though we will just have to imagine all of our fans’ smiling faces are behind the cameras, we know we are going to have a blast playing these new songs for everyone. It is also a great chance to support one of our favourite local venues that has been hit really hard by the global pandemic. The Rickshaw is a huge part of the metal community in Vancouver so we are happy to have a chance to give back to them. We absolutely can’t wait to rock out and let the music take us far away from all the darkness in the world right now, and really hope everyone can join us and take a little break from the madness for a while!”