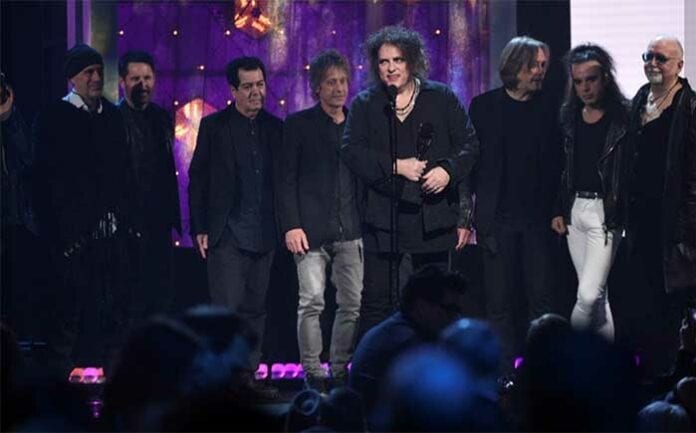 THE CURE were inducted into The Rock ‘n’ Roll Hall of Fame Friday night at the Barclays Centre NYC. The band was presented with the award by Trent Reznor of Nine Inch Nails and then played a handful of songs.

Reznor’s full speech:
“Good evening. I’m Trent Reznor. Tonight we are here to give praise and respect to one of the most instantaneously recognizable and sonically unique rock bands of the 20th century. Tonight, the Cure enter the Rock & Roll Hall of Fame.

I grew up in a small town—small town USA, Mercer, Pennsylvania to be precise, where there was nothing to look at but cornfields. It was a primitive time, long before the miracle of the internet arrived to devalue our wonderful art form. Even pre-MTV, with nothing to listen to on the radio and nothing to do but dream and escape.

When I left home, it was time for the big city—in my case the big city of Cleveland. And everything changed. It was the mid-80s, and just being able to tune into college radio made my head explode with limitless possibilities. This was my baptism into the world of alternative and underground music—the sounds that informed what Nine Inch Nails would eventually become.

One of the most important aspects of being swept away by this tidal wave of music was getting to hear the Cure for the first time. Immediately, this band struck a deep chord in me. The first album I heard was Head on the Door, and I hadn’t heard anything like it before. And a lot of darkness I felt in my head was coming back at me through the speakers and it blew my mind. It was like this music was written just for me. Now I’ve struggled my whole life feeling like I don’t fit or belong anywhere, kind of like right now. Hearing this, I suddenly felt connected and no longer quite so alone in the world. That’s one of the things I find so unique and special about the power of music.

It wasn’t just the sound or the words or the presentation—all of it was anchored by the most exquisite of instruments—Robert Smith’s voice. That voice, capable of such a range of emotion from an expression for rage, sorrow, and despair to beauty, frailty, and joy. It might sound naive but until I heard The Head on the Door, I just didn’t realize it was possible to write about such difficult and profound ideas, but do it in the context of successful songs that might even get played on the radio, challenging norms from the inside.

Anyway, I listened to that record nonstop until I wore the grooves off the vinyl and then I worked my way backwards. It was a rich and important back catalog waiting for me.

The group that would become the Cure formed in 1976 in the suburban English backwater of Crawley, a small town that all the members also dreamt of escaping from. They were four imaginary boys: Robert Smith, Lol Tolhurst, Michael Dempsey, and Pearl Thompson, who were energized both by the explosion of punk that was happening miles up the road in London and by the heavy psychedelic rock from America which they’d grown up loving.

After a few lineup changes and the creation of some timeless post-punk and new wave, the band entered 1980 as one of the groups who would come to define the music, the attitude, the look of the decade to come. Singer, guitarist, and songwriter Robert Smith, bassist Simon Gallup, and drummer Lol Tolhurst presided over a trio of classic albums—Seventeen Seconds, Faith, and Pornography—that would help to become what would be known as gothic or alternative rock.

Just as everyone else was getting ready to jump on the new sound that the Cure helped usher into the world, they were already moving to new pastures. Robert Smith was keen to show the world he could do so much more than monochromatic. He recorded a series of songs that became huge hits across the globe and are rightly still seen as classics today. The 13 albums they recorded over their 40-year career stand as a testament to their undiminished power and artistic imagination.

Despite making challenging music that deals with the biggest themes, their impact has been gigantic. They’ve sold the best part of who gives a shit how many million records and been an essential touchstone in the genres of post-punk, new wave, goth, alternative, shoegaze and post-rock. They’ve been in and out of fashion so many times in the last four decades that they ended up transcending fashion itself. Though they might be a hip name to drop in 2019, this wasn’t always the case. Their dedication to pushing sonic and artistic boundaries while making music for the ages wasn’t always rewarded with glowing reviews in the press. But they never failed to attract a passionate, intelligent and loyal fanbase who always knew the truth: The Cure are one of the most unique, most brilliant, most heartbreakingly excellent rock bands the world has ever known.

Quite understandably, most musicians tend to differ from their carefully cultivated personas to one degree or another. As far as I can tell, Robert Smith is that rarest of things—a 100 percent authentically Robert Smith kind of person who lives a 100 percent authentically Robert Smith kind of life. He used that to create a completely self-contained world. It’s a sound, it’s a look, it’s a vibe, it’s an aesthetic that the fans get to visit and immerse themselves in whenever they like. It’s a custom world for anyone who has ever dreamed of escape.

I should make a full disclosure at this point. I think it’s only right for me to admit that I’ve been, let’s say, ambivalent about the existence of certain award ceremonies. I’ve perhaps been in the habit of questioning their motivations with a certain degree of cynicism. In fact, I remember distinctly saying to myself, among other things, how can I even take this awards ceremony seriously if they’ll open their doors to X, Y and Z and not acknowledge the Cure? Not so long ago I get a phone call I wasn’t expecting, and, well, here we are. Let’s just say I’ve never been as happy to eat my words as I was tonight.”

Take a Behind-The-Scenes Look Inside the Recording of LIFE OF AGONY’s...