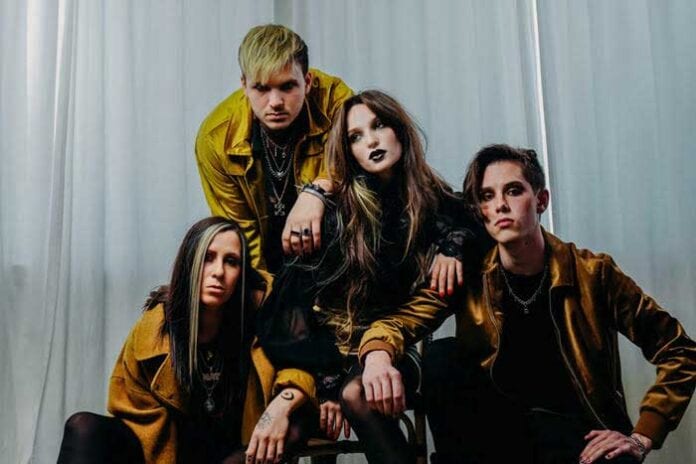 With cascading rain masking streaks on a window pane, a meteor eclipses the grainy frame. Pedals intersect, fully depressed. A light emits from a distance as a vehicle skids through the median. It’s fastidious. It’s furious. A shot of endocrine doused in flames, The Haunt’s message of empowerment courses through your veins.

April 9th, the new testament arrives. A state of the union on the ephemeral, the unilateral, on sense, and the senseless, Social Intercourse addresses the belly of interconnetedness.

Produced by Matt Good (Asking Alexandria, Hollywood Undead, Sleeping With Sirens), The Haunt’s sophomore EP contains six preordained chapters but it’s a conversation that will continue for years, decades and generations to come. “Brag About,” “Wish You Stayed,” “Constant,” “Love You Better” and “Twisted Dream” are feverish meetings of Herculean hertz and emotional currents. “Permanent” solidifies the purpose, a curriculum of person-to-person.

Led by singer Anastasia Grace and guitarist/vocalist Maxamillion Haunt, the sibling duo proffer a view of their milieu, “In order to engage in social intercourse, one must consider the other individual to be significant. This situation can be expressed through shared music, laughter, or deep and meaningful conversation. We named it ‘Social Intercourse’ because of the internal struggles we all face, trying to exist in the world how it is right now. Also, releasing an EP during a pandemic is fucking weird!”

With live dates in the works, the band, which also includes bassist Nat Smallish and drummer Nick Lewert, look forward to taking Social Intercourse to the streets, the meet ‘n greets, to the masses and real world classes. Navigating the tension of simultaneously braking and accelerating, should things stay the same, should they change lanes or should they eviscerate. Tracks and trains, cherries and champagne, steel curtains and a higher purpose, does it end at the beginning or does it promulgate.

THE POWER OF THE RIFF Returns to Los Angeles in August