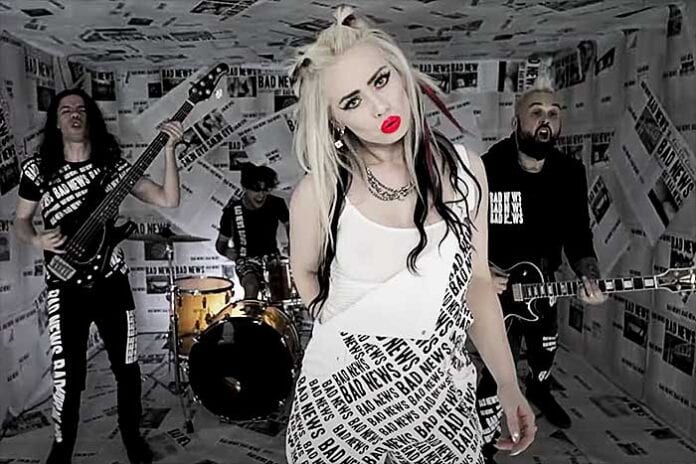 CHECK OUT OUR INTERVIEW WITH SKYE “SEVER” SWEETNAM OF SUMO CYCO IN OUTBURN #93—ON SALE NOW!

If their three ultra successful current singles “No Surrender,” “Bystander,” and the Kane Churko (Ozzy Osbourne, In This Moment, Papa Roach) produced “Vertigo” (which have now surpassed one million combined cross-platform streams/views) are any indication, it should come as no surprise that the band’s final pre-album single—the eclectic, infectious “Bad News”—is another total winner, showing off the band’s perfected multi-genre attack more potently than ever.

Frontwoman Skye “Sever” Sweetnam says about “Bad News”:
“I’m sure many people can relate to feeling like everyday is ‘Bad News’ over and over again. There was a point in 2020 when I was so glued to the news and current events it felt like my personal identity was fading away into an abyss and replaced with a scrolling, media consuming robot. It made me miserable, but I felt like I had a responsibility to know what was going on. It took me a while to peel myself away from the constant barrage of negativity and find a balance.”

Sweetnam adds about the video:
“The music video was really fun to film. I’m so lucky to have band members who are willing to get pretty weird with me. Once the make-up and prosthetics were on, the guys and I came to life as our Cyco Terrornaut family. I included some obnoxious color combos that almost make you question your sanity when you watch the video.”

MYRKUR and ANNA VON HAUSSWOLFF Cover Björk’s “All Is Full of...