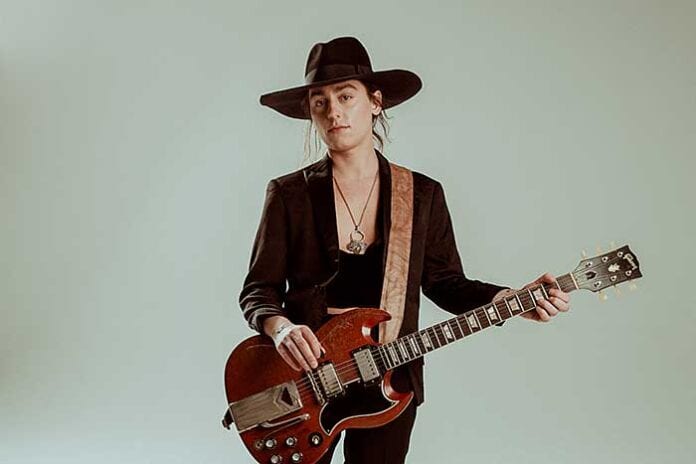 DON’T MISS AN EXCLUSIVE 8 PAGE INTERVIEW WITH ALL FOUR MEMBERS OF GRETA VAN FLEET IN OUTBURN #93.

ONLY 200 ISSUES OF THIS LIMITED EDITION COVER WITH GRETA VAN FLEET ARE AVAILABLE. PLUS, YOU GET A “HEAT ABOVE” BOX OF MATCHES!

To celebrate the release of Greta Van Fleet’s highly anticipated second full-length record, The Battle at Garden’s Gate, guitarist Jake Kiszka tells us in his own words his top 10 guitar riffs, in no particular order.

This one is a mangled adaptation of the English Blues. While originally being a Robert Johnson song, this riff, crafted by Eric Clapton during Cream, holds its own. One phrase I’d use to describe this particular riff is controlled chaos in every desirable way. It’s one of the first riffs I ever learned.

2. “In Every Direction” by Junip

On the contemporary side of things “In Every Direction,” a riff driven track by Junip, takes a folkier yet classic and bluesy approach at riff crafting. This track stands out as particularly melodic among most others in this genre. This would not be a pronounced selection for most people, however, it’s a standout track in my opinion.

3. “Midnight Rambler” by The Rolling Stones

Another bluesy choice from the British Invasion era. Jangling blues yet incorporates the use of the capo, which is uncommon. This riff gives the listener everything they desire in an iconic guitar motif. It’s simplistic yet it offers a depth of emotion, even if you aren’t well versed in guitar, and it still remains automatically appealing.

4. “Mind of a Junkie” by Anders Osborne

One thing about this riff is that it remains very patient. In order to get to the hook (or the fulfillment), it requires some listening first. Once you arrive at the hook, it invites you in and you’re swallowed by the Devil. A lot of these riffs are ancestors of blues’ origins. Unlike any of the other riffs on this page, this one tells a story and it leads you on to the end.

If John Lee Hooker’s mother didn’t love him, she’d still love this riff. King of the Boogie’s riff in “Boogie Chillen” marks one of the most simplistic and traditional yet groovy blues riffs of its era, a precursor to the golden age of rock ‘n’ roll. As a Michigan native, I’m proud to call this riff part of my home as JLH was from Detroit.

6. “Little Bird” by The White Stripes

Another Detroit group, The White Stripes. This is another sort of contemporary tune that expresses the evolution of blues. It is unabashedly aggressive, which always tends to be my preference. A contributing factor to what makes this riff so special is its simplicity. This riff is emblematic of The White Stripes and is particularly impressive given the fact that they are a two-piece group.

7. “Dust My Broom” by Elmore James

BOOM it opens, and we all know that track! This is one of my favorite riffs of all time and has been significantly influential to me. Along with Jimmy Page and Duane Allman, Elmore James was one of the most significant contributors to my slide guitar playing. There is a sense of patience and eloquence to this distinct riff yet it sparks of hedonism and antiquated madness is apparent. The balance of these elements is particularly difficult to achieve together. This riff is an example of how it can be done.

8. “Roadhouse Blues” by The Doors

A riff that can summon the masses. There’s a collective energy shared when this song comes on. There probably isn’t a guitarist out there that doesn’t know how to play this riff. Growing up, with such a musically inclined family and friend group, this song made an appearance at every event. Robbie Krieger is one of the most underestimated guitarists of his era. But with works like this, his playing will be memorialized forever.

9. “We Made It” by Cedric Burnside

Talking about blues lineage, the son of RL Burnside, Cedric Burnside takes the most direct history of guitar playing to the present-day form. This riff is traditional yet contemporary, as the flesh and blood are operating the strings. It’s considerably difficult to select one riff of Cedric’s, noting the entirety of the Benton Country Relic album is full of remarkable ones.

10. “The Immigrant Song” by Led Zeppelin

Stabbing and unrelenting. I don’t know that any other riff covers this amount of persistent assault in such a short period of time. It certainly inspires the craving for more provocative and forthright guitar playing. You assuredly get more of it with a group like Led Zeppelin.

DON’T MISS AN EXCLUSIVE 8 PAGE INTERVIEW WITH ALL FOUR MEMBERS OF GRETA VAN FLEET IN OUTBURN #93.

ONLY 200 ISSUES OF THIS LIMITED EDITION COVER WITH GRETA VAN FLEET ARE AVAILABLE. PLUS, YOU GET A “HEAT ABOVE” BOX OF MATCHES!