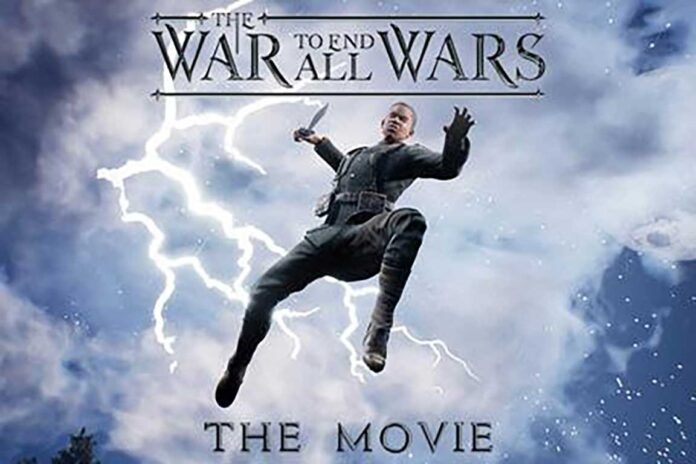 The time has come for Sabaton to reveal some big news. The band is beyond proud to announce that for the last two years, they have been busy working on an exciting, large-scale project.

In 2023, Sabaton will release The War To End All Wars movie, a full-length musical motion picture featuring songs from the band’s 10th studio album, The War To End All Wars. This movie vividly tells the stories of World War I by way of animation and live action. It will give the viewer a better understanding of what the band’s songs on the album are about — it is a musical and historical adventure.

In the meantime, enjoy this teaser…

Currently in post-production, the movie is being made in collaboration with Yarnhub Animation Studio. Sabaton previously worked with them on other projects, including their most recent animated story video for “The Red Baron.”

The War To End All Wars movie is on a completely different scale that neither the band nor Yarnhub have ever attempted before.

As the band has said, you’re going to want to see this!

“We premiered an early version of this movie to journalists during a preview session for our latest album, The War To End All Wars, at the Royal Military Museum in Brussels. Witnessing their reaction to it was priceless – they were speechless – so we decided to take it to the next level and push the boundaries even further for a global audience.” // Pär Sundström

“When Sabaton asked us to go beyond anything we had produced before and jointly create a film for their new album, we were filled with excitement and trepidation. It was a massive undertaking that required new people, technology, and skills. But we couldn’t miss the opportunity. We often say our mission is to harvest goosebumps, and our work with Sabaton has always been the most successful in that regard. It’s been two years in the making, but after spending many late nights and weekends in meetings with the band, the end result is something unique. A new way to listen to the album; a deeper understanding that helps the viewer experience the bravery and tragedy that was the inspiration for Sabaton’s latest masterwork.” // David Webb, Yarnhub

The War To End All Wars movie is a cohesive, thought-provoking and emotionally charged piece with a heavy focus on storytelling. It features members of the band, both in real life and animated, and a lot of research and effort has been put into it to ensure it depicts history in the most accurate way possible – this is something that the band is very passionate about.