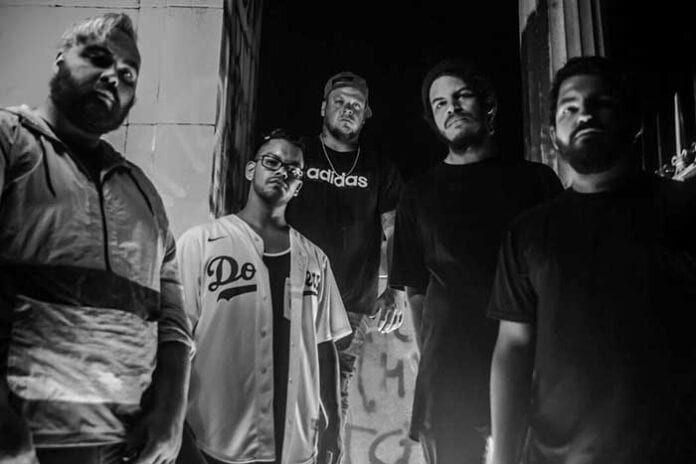 LISTEN TO THE EXCLUSIVE PREMIERE OF THE NEW SINGLE “OMEN” FROM RVNT ONLY ON OUTBURN.COM

Metalcore crew RVNT has announced their upcoming EP. Hell Follows Me is set for release on September 10th, on Theoria Records. The Virginia Beach quintet has also unveiled a new single, the eerie and punishing, “Omen.”

“Omen’ is about betrayal—when someone who is very close to you, or who has earned your trust, cuts you deeper than you thought was possible. The inspiration behind the song started with a feeling or suspicion that I had, which ended up foreshadowing an actual betrayal that happened later, echoing an eerie correlation between the lyrics and real life events.” – Ricky Gillis, vocals

Hailing from Virginia Beach, RVNT (pronounced “revenant”) came storming out of the blocks with the release of 2015’s debut EP Vulnerable capturing the attention of metalcore fans across the East Coast.

Releasing a stream of singles in the wake of Vulnerable, RVNT maintained a steady touring schedule, including East Coast runs with Palisades, A Scent Like Wolves & Convictions ahead of sophomore EP These Thoughts I Can’t Bear in 2019. The band has subsequently racked up over 2 millions streams on Spotify, with RVNT set to take to the stage at Blue Ridge Rock Festival this September.

Having signed to Theoria Records, RVNT is set for the release of upcoming EP, Hell Follows Me, an ambitious and dexterous display channeling the best of progressive post-hardcore with injections of effervescent nu metal.