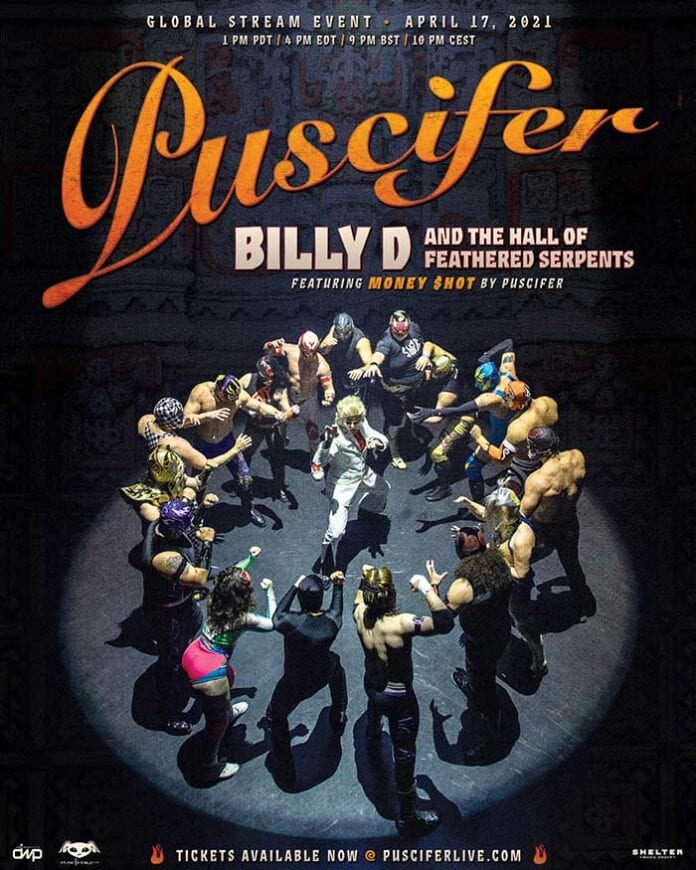 “In this prequel to his alleged abduction during Existential Reckoning, we find Billy D trudging through what has been referred to as the Bermuda Triangle of the Southwest,” explains Maynard James Keenan. “As is common within the Puscifer Vortex, Time and Logic have no home out here. Let that go. Just strap in for another magnificent ride through our collective Grey Matter.”

“Billy D and The Hall of Feathered Serpents featuring Money $hot by Puscifer” debuts on Keenan’s April 17 birthday, and reprises the Luchador infused performances surrounding the band’s 2016 album, Money $hot (which will be played in its entirety). The production highlights Puscifer’s unique marriage of music-meets-theater.

Los Angeles’ historic Mayan Theater, a 1920s era revivalist theater featuring original artwork by Mexican painter and sculptor Francisco Cornejo, serves as the backdrop to the one-time outing. The elaborate cultural landmark, with its jaw-dropping Mayan calendar infused chandelier and a lobby dedicated to the bird-meets-reptilian deity Quetzalcoatl, gave birth to the performance’s title. “While looking both forward and backwards, we stumbled into The Hall of Feathered Serpents,” explains Mat Mitchell. “The perfect site to pay homage to the Money $hot album and tour.”

“Billy D and The Hall of Feathered Serpents featuring Money $hot by Puscifer” debuts on April 17 at 2:00 pm Pacific/5:00 pm Eastern/10:00 pm UK/11:00 pm EU and remains on-demand for 72 hours. Tickets for the exclusive performance, as well as a selection of limited edition merchandise exclusive to attendees, including an opportunity to stream “Existential Reckoning: Live At Arcosanti,” are available now via pusciferlive.com with early bird ticket prices available through April 11.