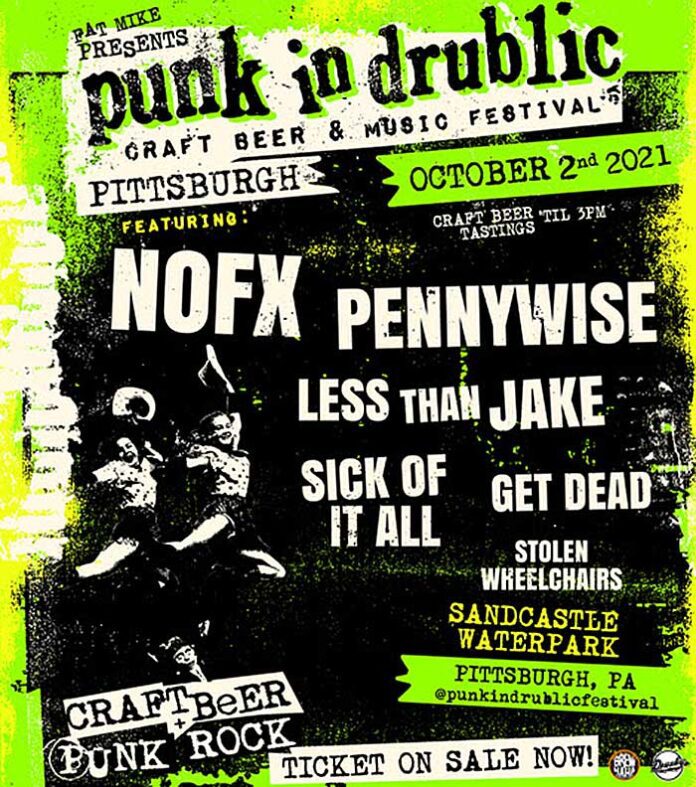 Brew Ha Ha Productions has announced the highly anticipated return of Fat Mike Presents Punk In Drublic Craft Beer & Music Festival to Pittsburgh, PA for the first time since 2018. The Saturday, October 2 event in the lot at Sandcastle Waterpark will feature the best in punk rock music and regional craft beer, with performances from NOFX, Pennywise, Less Than Jake, Sick Of It All, Get Dead and Stolen Wheelchairs.

The Punk In Drublic Craft Beer & Music Festival was created from the mind and livers of NOFX’s frontman Fat Mike and craft beer fanatic / festival promoter, Cameron Collins of Brew Ha Ha Productions–and named for NOFX’s classic Punk In Drublic album, which has sold over one million copies.

Fat Mike said, “Hello greater Pittsburgh area and Squirrel Hill! Fat Mike here to tell you that I’m extremely yet mildly excited to tell you that we are finally coming back to your town! AND……We’re not just gonna thumb wrestle and go to the hospital… We’re also gonna play music!!!! Whoooo!”

Punk In Drublic Craft Beer & Music Festival co-producer / co-creator Cameron Collins said, “What makes Punk In Drublic so special is the authenticity of it. True craft beer comes from local and regional breweries who are running their businesses with the same mentality as punk rock music: independent, often times controversial, and without a care in the world about how it’s ‘been done in the past.’ Punk rock is the music that much of the craft beer we drink is brewed to…it’s appropriate to have an epic event that celebrates the two!” He added, “It’s been too long that we’ve been stuck inside; it’s time for people to leave the house and get ‘punk in drublic.’”

The 21+ Pittsburgh event is co-produced by Drusky Entertainment and will feature up to three hours of craft beer tasting showcasing an impressive selection of craft beers, including some of the region’s best and local favorites. Participating craft breweries will be announced in the coming weeks.

The Punk In Drublic festival series launched on July 17 in Denver, CO (Sculpture Park) and will visit various cities across the U.S., including Worcester, MA (The Palladium Outdoors) on September 25, and more to be announced. NOFX headlines all festival dates, and lineups vary by city. Visit www.punkindrublicfest.com for music lineups and more details on all festival dates.