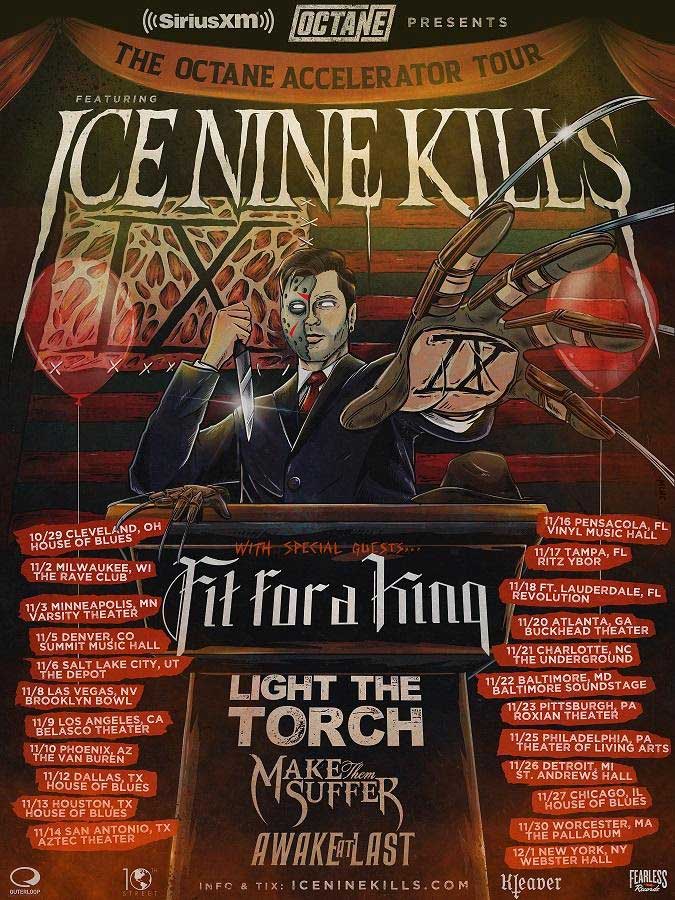 Boston horror-inspired metal group ICE NINE KILLS have announced their headlining 2019 SiriusXM Octane Present’s “The Octane Accelerator Tour” to take place this fall featuring support from Fit For A King, Light The Torch, Make Them Suffer and Awake At Last. The U.S. tour will kick off on October 29 in Cleveland, OH at House of Blues, hitting major cities cross-country before wrapping in New York City on December 1 at Webster Hall. General admission tickets will go on sale this Friday, August 9 at 10:00 AM local time at www.iceninekills.com. Sirius XM subscribers will have access to purchase presale tickets on Thursday, August 8.

“The Octane Accelerator Tour will carve itself into the soul of America this fall, and it won’t be pretty,” declared ICE NINE KILLS vocalist SPENCER CHARNAS. “With these five bands on the loose I fear for the safety of our country.”

SiriusXM’s Octane channel is committed to finding and exposing the new artists pushing the sound of Hard Rock music forward. “Octane Accelerators” is a feature that introduces North America to new artists that have Octane’s stamp of approval. SiriusXM’s Octane was the first in the world to play ICE NINE KILLS’ “A Grave Mistake,” on September 14, 2018 and was named an “Octane Accelerator” a week later. Additionally, SiriusXM selected ICE NINE KILLS as a “Future Five” artist of 2019. The “Future Five” for 2019 consists of five new artists that SiriusXM predicts will breakthrough in 2019.

“Ice Nine Kills immediately connected with the Octane listeners. Spending 9 months on the Big Uns countdown and 5 weeks at #1,” says SiriusXM Octane Program Director Vincent Usuriello, “We are excited to team up with Ice Nine Kills on this tour to continue to connect the Octane nation with the emerging Hard Rock bands they discover on Octane.”

Dates for the tour are as follows: