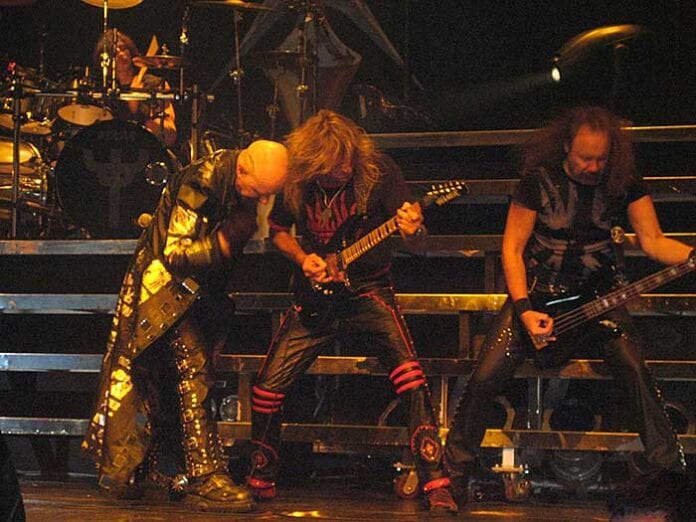 When you think heavy metal, you probably see a 70s, 80s and 90s band with long hair, leather outfits, ripped jeans, studded and spiked jewelry. The rugged appearance and a ton of black (we mean, a lot) worked well with the aggressive music style and “we don’t care” attitude. Bands such as Iron Maiden, Judas Priest, Motörhead, and Black Sabbath became icons and were emulated by their fans at the concerts and in daily life. But some heavy metal fashion trends crossed the subculture borders and gained mainstream popularity. Here are fashion trends that started from heavy metal.

Heavy metal fashion involves the metal uniform of blue jeans, black t-shirts, boots (and sneakers in the 80s), and a black leather jacket. The heavy metal style was cemented in the 70s when longhaired artists wore a lot of makeup, extravagant leather and metal studs to showcase their rebellious nature.

Like everything, the style had progressed, and in the 90s, leather was substituted by flannel shirts and jeans. Finally, the early 2000s brought back a version of the classic, original metal style.

If there was anything you could recognize heavy metal fan from, it was the band t-shirts with the logos, elaborate paintings and album covers. Worn proudly at concerts and everywhere else, it was a unique way to state the musical preferences and association with the subculture. Today, you can’t be too sure, as band t-shirts are sold everywhere, and there’s a chance that the girl with the Metallica t-shirt wouldn’t recognize a single song of theirs.

Later sport t-shirts became a bit copying this trend. Nowadays you can see people wearing LA Lakers shirts and even accessories like caps without knowing who the Lakers are and what are the latest NBA Trade Rumors 2021. Band t-shirts are ubiquitous, and while they do look cool, they’ve lost a little charm as, like with everything, if you don’t have to work to get one (e.g. bang your head at a concert for hours), it loses value.

Dr Marten boots are iconic. They went from a practical, tough, thick-soled shoe to a fashion statement through the years. It wasn’t until Pete Townshend from The Who introduced the shoe to rock ‘n’ roll in the 60s that they truly found their niche.

Beloved by rock and metal fans through the decades, today, Dr Martens boots are everywhere. Fashion models and “it girls” wear them at restaurants, celebrities don them on the red carpet, and high school teachers get a pair to look cool in front of their students. Originally black, now Dr Martens are available in such colors as purple and pink, too.

Some heavy metal artists in the 80s swapped their leather boots to high-top sneakers. Usually white or black and very dirty, high-tops became another subculture staple.

Today, it’s a fashion trend making businesses millions each year! Those who still feel fond of heavy metal can get classic high-tops or a pair adorned with studs. Others love colorful or even bedazzled sneakers.

Leather jackets were always a symbol of toughness. Started as military wear, they’ve developed into a piece of wardrobe almost every person possesses. Made cool by Hollywood stars Marlon Brando and James Dean in the 60s, they were then adopted by stars such as Steve McQueen, The Beatles, The Rolling Stones, and others.

Soon, heavy metal band members were wearing them on stage, too. Traditionally black, today you can get a leather jacket in any color, and all mainstream brands like H&M or Zara always have one available.

From teenagers to guys in their 30s, people love ripped jeans. It wasn’t like that not so long ago, though.

According to Adslondon.co, ripped jeans always provided a channel in the rebellious and edgy take on fashion. Tears and rips portrayed a rugged style and always had an anti-establishment or anti-authority feel.

Leather Accessories with Spikes and Studs

Today, when a person wants to signal to the world that they have a rebellious streak, they often wear a leather bracelet or a belt with studs.

This trend had its ups and downs, but no doubt made it to the mainstream. No matter the fashion cycle, studded leather accessories will always be associated with the OG rebels—metalheads. Spiky bracelets and studded belts are an essential element of the subculture.