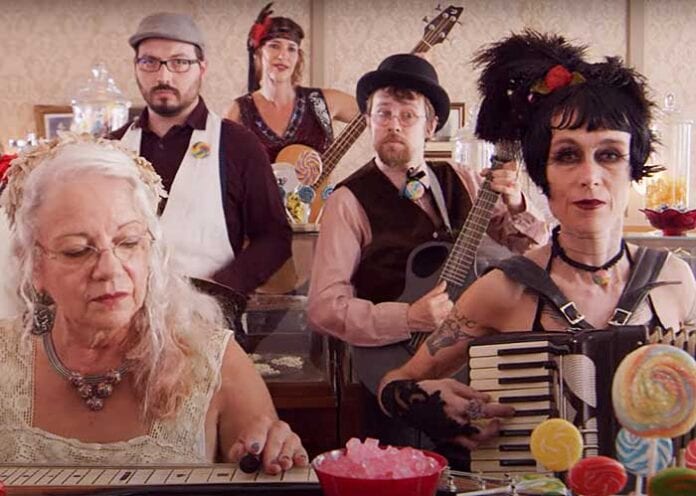 “My grandmother loved to play piano. She knew all of the old time hits, but ‘Candy Store’ was a dark Depression-era song and it burned its way into my memory like a lithograph,” explains Dust Bowl Faeries frontwoman, Ryder Cooley, about their latest eight minute music video novella “Candy Store.” Based on a traditional Yiddish folk song, “Candy Store” is the first single released from New York-based cabaret-inspired indie rock band’s latest album The Plague Garden (out November 20, 2020).

“I always liked the sinister stuff, like the story of Aunt Dorothy who accidently lit herself on fire and burned to death,” confesses Cooley about the dark family tales that inspire her music. “Maybe that’s why my grandma played ‘Candy Store,’ because it reminded her of Dorothy. Or maybe it was because her husband was a candy salesman and she was diabetic so she couldn’t eat any of his candy. Or maybe it was because grandpa’s ancestors were slavic gypsies who immigrated from Eastern Germany and Poland. There are so many layers of family history embedded in this song, and I am happy to keep the song alive in the oral history tradition.”

Filmed in Catskill, NY, the video features the historic Mayflower Confectionery candy store, restored to its original state by set designer Jesika Farkas. According to producer Lisa Thomas, “We brought back all the former details of the one time candy shoppe down to the original candy cases, fixtures and lights. It was so authentic that the locals of Catskill kept stopping in to try to buy candy.”

“The thought of rallying the band for a video seemed unfathomable,” says Ryder who reunited the band for the filming during the pandemic, taking all the necessary safety protocols. “There were so many conversations back and forth about if we should do it, how to do it safely, etc. I could hardly stand all of the logistics and complications. I tried to convince Lisa to postpone the shoot, or at least simplify the script, but once she gets her mind set there is no stopping her, not even a world pandemic!”

BIG|BRAVE Announces Western US Tours with Deafkids and Sunn O)))