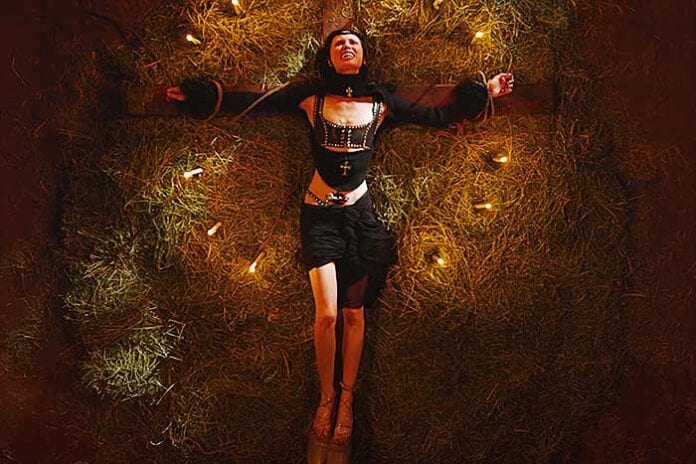 Canadian-born musician/model Dana Dentata has shared “pantychrist,” a brand-new single which also serves as the title track off her forthcoming debut album expected to arrive this year.

Produced by Dylan Brady of 100 gecs, “pantychrist” is available today on all streaming platforms and is joined by an official music video written/conceived by Dana Dentata and directed by Kathleen Dycaico. On “pantychrist,” Brady’s signature maximalism production lays a menacing foundation for Dana Dentata as she ushers in a new era of self-empowerment and continues her artistic journey into the light.

“Healing a lifetime of trauma can feel uncomfortable, vulnerable and painful, similar to a pregnancy,” remarked Dana Dentata. “Your former self may die in the process but what comes next is a new creation of life that is beautiful and pure. In many ways the abuse I’ve endured around my womb has held me down and kept me in purgatory. Ripping out the nail from my womb means setting myself free, bringing my new self back to life to experience happiness, purity and bliss. The ‘pantychrist’ state of mind I have been manifesting is finally coming to fruition.”

“pantychrist” follows Dana Dentata’s recent single “Do U Like Me Now?” which is joined by a Charlie C. directed music video featuring Adult Film Star Eliza Ibarra. Dana Dentata drew inspiration from Ibarra for the song, referencing a viral moment from 2011 when Ibarra posted a video titled “Do You Like Me Now?“ to Tumblr. A reaction to the unrealistic expectations placed on women by men, which Ibarra endured at a young age as she struggled with low self-esteem, the clip left a lasting impact on Dana Dentata who sampled it for “Do U Like Me Now?”—seizing the reins on the narrative of being a woman in a patriarchal society, transmuting her trauma and weaponizing it.

Both “pantychrist” and “Do U Like Me Now?” preview Dana Dentata’s forthcoming debut album, pantychrist. In recent months Dana Dentata has been finalizing work on pantychrist, collaborating in the studio with artists / producers Robokid, Yawns and Fish Narc of GothBoiClique, The Heavy and more.