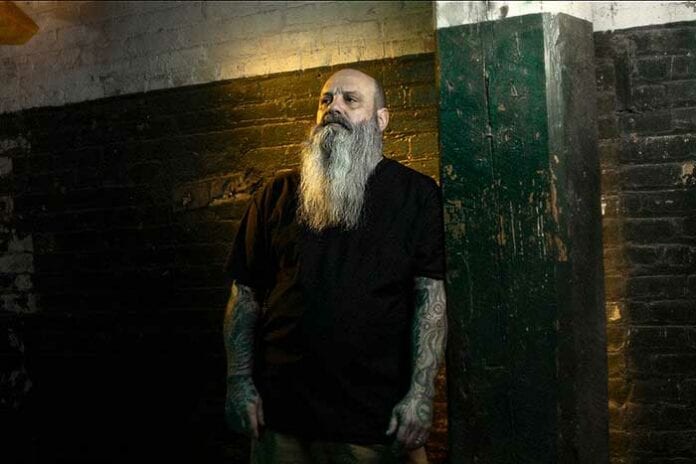 Kirk Windstein, the highly respected sludge metal pioneer and unmistakable earthmoving bellow of Crowbar, stomps forward as a solo artist for the very first time. On January 24, Entertainment One (eOne) will proudly release Dream in Motion, Windstein’s singular debut and a recording that sees the Dark Lord of the Southern Riff stretch his creative wings and strengthen his indelible legacy.

In advance of the release of Dream in Motion, Windstein today debuts his reverential cover of the hugely influential Jethro Tull song “Aqualung,” a rock ‘n’ roll treasure.

“Aqualung” has always been one of my favorite classic rock songs,” says Windstein. “Crowbar used to cover it. I’m really proud of the way the song came out as a whole and I hope that [Tull’s] Ian Anderson and Martin Barre get to hear it at some point.”

Recorded in Windstein’s native Louisiana over a period of two years between tours and over holidays, Dream in Motion is a powerfully moving recording that pulls from every corner of the riff king’s three-decade-plus career. The LP owns a lyrical depth, emotional weight, and musical muscle forged from the fires of thousands of worldwide live shows, and Windstein’s well-earned reputation for creating the melancholic melody that has become synonymous with New Orleans heavy metal. Kirk handled all vocals, guitars, and bass on the album, with drums and effects by longtime producing partner and collaborator, Duane Simoneaux (Crowbar, Down, Exhorder). Dream in Motion, has met to scads of critical acclaim in the weeks leading up to its release.

ISSUES Are “Flexin” in New Single and Video

BETWEEN THE BURIED AND ME Announce North America Tour Dates