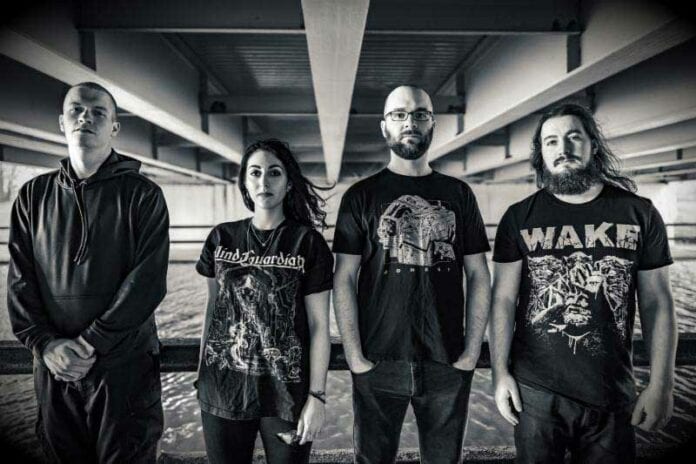 Thrive On Neglect is the forthcoming new full-length from Chicago-based blackened death grind unit IMMORTAL BIRD. The band’s second LP, and first for 20 Buck Spin, takes the perilous road of musical diversity and commands it with a bloodthirsty rage.

With a multi-layered sound running the gamut from pummeling grind and death metal to dissonant blackened metal, angular noise, and complex hardcore, IMMORTAL BIRD defy simple categorization. The band’s compositions fuse into strikingly savage songs, vast in their scope and more than the sum of their disparate parts, merging the progressive and destructive into a maelstrom of raging fire. Rae Amitay’s seething vocal exorcisms and targeted lyrical aggression provide the connective tissue holding the stylized violence together.

In advance of its release, IMMORTAL BIRD offers up second single, “Vestigial Warnings,” for public feasting. Notes Amitay of the track, “This was the first full song we wrote together as our current configuration, and we’ve been playing it together for almost two years. Finally having it recorded and released feels like a significant step. Lyrically, this one is more ‘political’ than the rest of the material on the album. I’m not trying to be indirect by using metaphor, but I also don’t want to limit people’s perspective by being overt. With the ‘eyeless, glowing grubs…sickly white, dying still…choir of weakened gasping…,’ I’m not saying that I was thinking about certain people who occupy positions of power in this country but… Actually, that is what I’m saying. ‘They’ll tell you this is how it has to be. Abandon hope and worship apathy.’”

IMMORTAL BIRD’s Thrive On Neglect will see release on CD, LP, and digital formats July 5th. For physical preorders, go to THIS LOCATION. Find digital preorders at the 20 Buck Spin Bandcamp at THIS LOCATION where opening track, “Anger Breeds Contempt,” can be streamed.

IMMORTAL BIRD will kick off a near-two-week western US tour tonight in Denver, Colorado. The trek includes an appearance at Northwest Terror Fest as well as performances with Gadget and Cloud Rat on select shows. See all confirmed dates below.

FALLING IN REVERSE Announce The Drug in Me Is Gold Tour

DANA DENTATA Shares “Do U Like Me Now?” Official Video