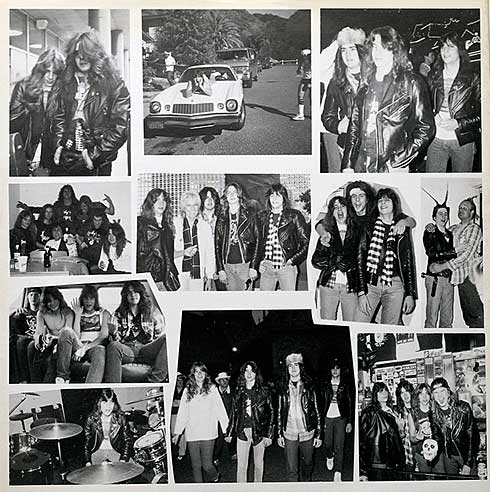 I hope you old timers enjoyed the brief stroll down memory lane provided by PART 1 of our piece on thrash collages. And I hope you young’uns new to the game have had your interests piqued. As for you heathens who’ve sworn off vinyl? Well, you’re hopelessly beyond saving and/or fucked beyond repair, and nothing I, or anyone else, will ever say will be able to change that! By now, you’ve got the gist of things and have a good idea of what constitutes a decent collage, and the six following examples are top-notch contributions to this unsung world. And yes, I know, I know, not all of these bands are thrash metal, per se. But on that same side of the coin, Black Metal the album hardly sounds like what black metal the genre has become. So there.

And finally, “Why 11 albums and not 10?” I hear nobody asking. A quick perusal of the selections here will reveal that 10/11ths of the albums given mention were released in 80s. Simply, I wanted to throw a bone to one good example of a more recent outfit paying homage to the collage art form. Without further ado, here’s Part 2.

6) PICK YOUR SIDE – Let Me Show You How Democracy Works (2011)
There were a few worthy candidates of quality albums from the 2000s that dipped back into the old style of black-and-white photos thrown together in cut and paste style, but when it came down to it, I leaned towards a band from my neck of the woods and of which I’m friendly with a couple of members. Pick Your Side is best described as hailing from Southern Ontario and disbanded a couple years after the release of this, their debut full-length. Musically, it’s rapid paced, thick and meaty hardcore that mostly references the era the album’s inner sleeve is referencing with added tinges of 90s hardcore and powerviolence ‘round the edges. The collage is pure 80s magic with photos of dudes throwing horns, nursing beers, pulling ridiculous faces with logos proclaiming some sort of love, ironic or otherwise, for Burger King, Zima, PBR, brown bagged 40s, D.R.I., and a toothy vampire puppet flipping the bird. As this surfaced some 20 plus years after the height of the original wave of thrash collages, there is absolutely more facial hair and many more visible tattoos in this collage, but there’s also a sense that these guys had a good time doing Pick Your Side and understood the value of printing out photos before your phone dies or you drop it in the toilet. Of note: Ed Repka did the cover art.

5) CRYPTIC SLAUGHTER – Convicted (1986)
My first exposure to Cryptic Slaughter was via their 1985 demo, Life in a Grave. I was so smitten with their light speed thrashcore that I would tell anyone who would listen about this crazy band I, and others, christened “the fastest band on the planet.” Back in the days of snail mail and cost prohibitive long distance phone calls, I managed to strike up a now and again communication pattern with guitarist Les Evans from whom I bought shirts via “well hidden” cash and conducted interviews for my fanzine. When the band’s debut hit in 1986, it was resplendent with a proper collage in which I got to see snippets of the Southern California metal/hardcore scene and photos of Evans, his bandmates, and a few of the dudes from other bands I’d read about and whom he casually mentioned during conversation and in letters. I’ve always been of the opinion that Convicted’s collage surpassed the medium’s bell curve as it interspersed lots of silliness with live photos and others that were completely out of place, like vocalist Bill Crooks’ yearbook photo. This one is notable for photos of the band playing as a three piece before bassist Rob Nicholson joined, the photo of Hirax vocalist Katon DePena sporting a Sacrifice shirt, Cryptic Slaughter rehearsing in a living room, a post-practice mooning, and all the Suicidal Tendencies inspired fashion that was something a young teen from Ontario had no idea was actually a thing outside of Suicidal Tendencies.

4) SACRIFICE – Torment in Fire (1985)
The collage inside Torment in Fire is absolutely killer. But it also ranks on this list because of the close to home significance it holds for your humble narrator. Long story short, I grew up in the same part of Toronto as the guys in Sacrifice. The city had a bustling metal scene, especially the east suburb of Scarborough, and while I was a few years younger than those guys, there was always going to be a kinship with anyone you’d see sporting the Canadian Tuxedo (cut off denim over a leather jacket) and wearing a bootleg Venom shirt purchased from one of the many headshops on Yonge Street. The collage that came with the band’s debut album is a great one, and one that is actually quite innocent in that, aside from the live photos, it’s virtually nothing but suburban dudes raging. It may not sound very special or significant, but a collage like this is a lot more interesting when you know many of the people in the photos. There’s the band themselves, a couple guys who grew up on the same block as I did, some people I still see once in a while at shows to this day and, sadly, some people who are no longer with us. Of note: Torment in Fire’s collage probably has both the highest number of middle fingers flipped and, inversely, features the least amount of alcohol on display during any display of partying in the history of partying. Also take note of Ron Sumners’ (drummer from Slaughter) kick-ass Adidas track pants, bassist Scott Watts and former manager, the late “Black Metal” Ray Wallace literally getting caught with their pants down, the tiny photo of Brian Taylor (the band’s long time producer) looking on with his usual combination of annoyed boredom and unimpressed cantankerousness, and this collage as a microcosm of how multicultural the Toronto metal scene was/is.

3) WRATHCHILD AMERICA – Climbin’ the Walls (1989)
Baltimore’s Wrathchild America—denoted as such because of the UK glam band using the Wrathchild moniker before the Yanks—was another band that offered up a couple of untouchable albums during the heyday of thrash. Both Climbin’ the Walls and 3-D scored some acclaim, but not nearly as much as was deserved. The band was a unique mixture of streetwise roughness, infectious quirkiness, classic rock melody, wry bald-faced humor, and virtuoso musicianship. Ironically enough, being signed to a major label didn’t help them, as Atlantic Records took the band before they had a solid underground following and shot them into the public eye expecting everyone who liked the Big Four—Metallica, Slayer, Megadeth, and Anthrax—to like Wrathchild America. Because of this, the band never was able to cement a loyal foothold to grow off of, instead being thrust in front of fair-weather fans that shrugged their shoulders when it was time to move on to the next dictated trend whereas serious thrashers would have stuck with them until something approximating the bitter end. What will exist until the bitter end is the collage in the band’s debut. This one is probably the champion when it comes to most photos per square inch with the bent appearing to be more of a focus on playing and what life is like in a high caliber working band (I did mention their proficient musicianship. You don’t get that good by not playing). Included are photos upon photos upon photos of the band mid show, mid rehearsal, or mid recording. There are also stills of the band on tour at “Welcome to…” state signs, loading gear, and changing flat tires. This doesn’t mean that there aren’t inordinate amounts of goofy face making and gaping metal mouths, but it seemed like they wanted you to know that a life in a metal band isn’t always just fun, games, and snorting coke cut with B12 off of medically enhanced stripper chests.

2) D.R.I. – Crossover (1987)
Crossover will forever be recognized as one of the greats when it comes to advertising what’s on the tin. There once was a time when metalheads risked an ass kicking were they to turn up at hardcore shows and vice versa. The crossing over of the two genres by bands like Crumbsuckers, Agnostic Front, Suicidal Tendencies, Excel, and D.R.I. essentially put to pasture a bunch of territorial nonsense mostly based on how often someone decided to hit a barber shop. Best of all, some awesome music was created in the process. It also bequeathed upon the public excellent collages, like the one in the Metal Blade release of D.R.I.’s sophomore album. By now, you know what elements comprise a solid collage, and Crossover has ‘em all: photos of the band playing live; photos of them hanging around various cities and clubs on tour; photos of their goofy friends; a little alcohol; celebrities (including photos of I believe members of Slayer, The Accused, and Curly from The Three Stooges) all haphazardly thrown together for a different era of music fan at a different era of music fandom. Note the dude with D.R.I. written on the shaved side of his Mohawked head and the preponderance of awesome, old school, first run band shirts.

1) POSSESSED – Seven Churches (1985)
Possessed’s Seven Churches was not only one of the earliest expositions of what would come to be known as death metal in album form, but the included collage was one of the first to seriously demystify a band’s image, intentionally or otherwise. Take a gander at the back of the record and you’re confronted with what were probably the evilest looking photos of metal’s early history—blood, weaponry, inverted crosses, spikes, dry ice mist, and gnashing bared teeth accompanied pained expressions that led you to believe that this band truly suffered in bringing death metal to the fore and were probably high ranking members of Satan’s army. Maybe they weren’t as over-the-top as Venom, but at first glance they seemed more serious. The collage within tells a different story. Granted, there is wasted space in the original Combat Records version, and the photos aren’t nearly as myth busting as Beyond the Gates’, but beyond all the stuff that made senator’s wives wet their panties in the bad way, there are instances of a sense of humor being put on display (I don’t know who the older, sleeping gentleman in the top left region is, but he makes a couple of unceremonious appearances), requisite group alcohol consumption, photos of Debbie Abono and Katon DePena, people blowing raspberries at the camera, and plenty of photos of the band without their stage garb on which illustrates they didn’t come down the birth canal spiked up and ready to rock. They were just regular California dudes at heart, despite what legions of bangers without a direct line to knowing what the band looked outside of those four photos on the back of the record like would care to think. Note that the repeated appearance of one of the greatest fashion faux pas known to man: dressing in all black, but wearing white sneakers. Fucking sacrilege.