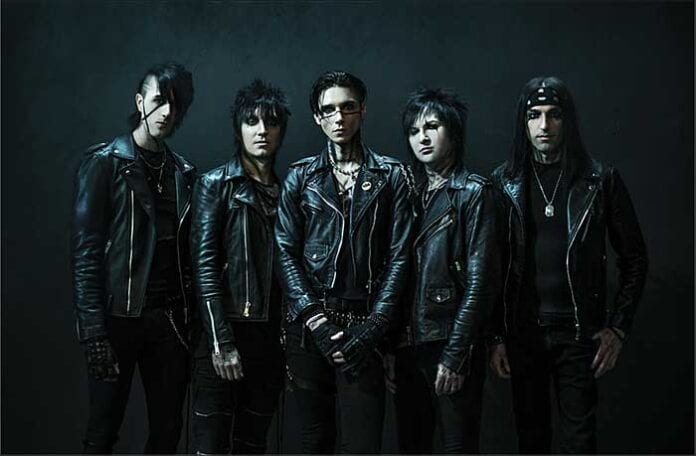 Band To Perform Album In Full For The First Time Ever At Special Album Release Show Live Streamed From The Whisky A Go Go On Saturday, August 1st 2020 Beginning At 2pm PST Tickets On Sale Now From BlackVeilBrides.Live

Iconic hard rock outfit, Black Veil Brides, have announced today that they will be celebrating the 10th anniversary of their debut We Stitch These Wounds with a brand new, re-imagined, re-recorded 2020 edition of the album titled Re-Stitch These Wounds, released on Sumerian Records on Friday July 31st. Pre-Orders are available from ReStitchTheseWounds.com. Fans can check out the first of the re-imagined tracks from the album, “Sweet Blasphemy.”

Speaking on Re-Stitch These Wounds and his band’s 10th year milestone, frontman, Andy Biersack says, “We are so excited to have the opportunity to revisit and reimagine our debut album for its 10 year anniversary. A decade ago I was just a teenager trying to find my way and meet like minded musicians, I was fortunate enough to meet Jake and Jinxx and we clicked instantly. I can remember writing so many of these songs in the tiny Hollywood apartment Jake and I shared and tracking our own demos, so to have the opportunity to take a look at these songs again and update them for the modern era of the band with Jake at the helm producing and mixing is a full circle moment for us.

We have never been happier as a band then in the current lineup and it’s amazing to get the chance to start over and do with this record what we always wished we could have done the first time around. This isn’t meant to be a replacement for the original album but rather a companion piece that we hope fans can enjoy and see the musical evolution of the band in a unique way.”

Black Veil Brides will be furthering the celebrations with a very special Album Release streaming event on Saturday, August 1st, when they perform the Re-Stitch These Wounds in full for the first time ever and it’s broadcast live from the world famous Whisky A Go Go in Hollywood, Ca. The event will begin at 2pm PST/5pm EST. Fans can purchase tickets to the album release show from BlackVeilBrides.Live

Speaking on the 10th Anniversary of Black Veil Brides and his history with the band from the early days of their career, Sumerian Records founder/CEO, Ash Avildsen says, “It’s been one hell of a journey working with BVB as their booking agent from when this record first came out until now being their label partner. Having their debut album re-recorded with modern production under the Sumerian banner is a true milestone for us that I am very proud of after working with Andy and the BVB family for all these years. Almost everyone told me I was crazy back then to sign up for the ride and that it wouldn’t work. Well? Now here we are with the band being one of the biggest break-out hard rock acts of the past decade and the best is still yet to come.”