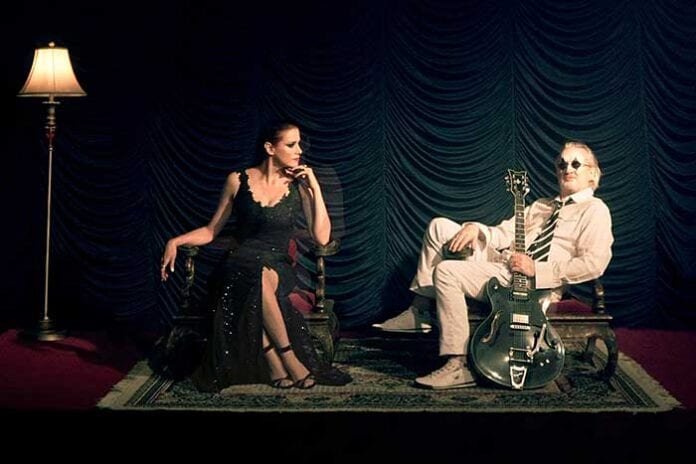 Shot in a Sao Paolo circus and inspired by Beauty and The Beast with a Lynchian flavor, “The Delicate Balance Of All Things” sees the legendary WAYNE HUSSEY (THE MISSION, SISTERS OF MERCY) and Brazilian vocalist wife CINTHYA HUSSEY team up with iconic producer TIM PALMER (David Bowie, The Mission, U2, The Cure) and BEAUTY IN CHAOS mastermind MICHAEL CIRAVOLO.

Featuring Cinthya Hussey, whose beautiful painting also graces the album cover, her gorgeous rendition of “The Delicate Balance Of All Things” is the fourth video-single from their new album Out Of Chaos Comes…, released via Los Angeles’ 33.3 Music Collective.

The original version of this song, penned by BIC curator Michael Ciravolo and The Mission’s Wayne Hussey, appears on The Storm Before The Calm album. Along with BIC producer Michael Rozon, Ciravolo set out to strip down the ominous tone of the original especially for this remix release. After hearing Wayne’s wife Cinthya’s rendition of The Smiths “Everyday Is Like Sunday,” the idea emerged for her to sing this new version along with Wayne.

This remix was created by legendary producer Tim Palmer (David Bowie, The Mission, U2, The Cure). BIC main-man, Michael Ciravolo says “Tim has always been one of my favorite producers… and one of the silver-linings of this lockdown is that he has time to do this and two other remixes for our new album.” Far from being a typical band, with its revolving/evolving lineup, videos are the truly the “face” of BIC. Ciravolo’s goal is to make each visually different from its predecessor and this new video certainly checks that box.

“When we returned the track, the delicate balance of all things, to Michael with Cinthya’s newly-completed vocals, Michael’s reaction was to declare he loved it and that we had to shoot a video for this version, remixed by the redoubtable Tim Palmer,” said Wayne Hussey.