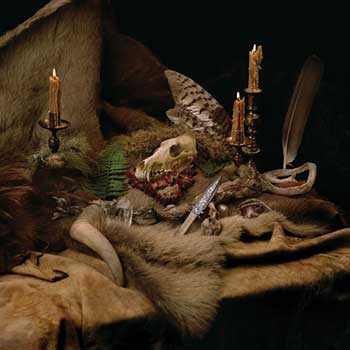 BLACK METAL: From the depths of the cool mountain forests of the Pacific Northwest, atmospheric black metal trio Wolves in the Throne Room, commonly abbreviated as WITTR, is back with their latest album Primordial Arcana on Relapse Records. Recorded in the woods at their own studio, Owl Lodge, the album evokes the feeling of being immersed in the wilderness, surrounded by tall pointy spired fir trees. This record comes after 2017’s extremely well received Thrice Woven, which saw the band gain notoriety not only domestically but also internationally, with some very high-profile tours supporting massive bands like Behemoth, At the Gates, and Dimmu Borgir.

While their new record features many of the musical elements that fans of the band have come to love, Primordial Arcana also sees WITTR experimenting with more atmospheric and epic instrumentation. The production still feels raw but is less lo-fi than their previous effort. Lyrically, the record is awash with imagery of nature that combines with auditory elements the band uses to create a soundscape—the songs punctuated by ritualistic drums, the calls of crows, and the trickling of water. Distorted guitars and rapid drumming meld with this to create something dark and primal. Vocalists Nathan Weaver and Kody Keyworth’s raspy screams and deep growls at times feel delivered from the depths of a hellish abyss, and at other times float and shimmer atop synth heavy melodious passages.

Few, if any, black metal bands can create something as brutal, yet beautiful as what WITTR has done on Primordial Arcana. That’s not to say this is a soft sounding record. Album opener and early single “Mountain Magick,” for instance, has all the elements of a heavy, hair whipping, black metal song—rapid blast beats, tremolo picked guitar riffs, and shrieking vocals. Meanwhile, the more melodic “Spirit of Lightning” slows things down, giving the listener a brief reprieve. The entire album flows together well, but there are a couple other standout tracks, such as the epic “Primal Chasm (Gift of Fire),” which begins with a grand brass section before giving way to some of most headbang inducing, expertly executed guitar/drum passages on the entire record.

On the slower and more plodding “Underworld Aurora,” gruff vocals, blast beats, and other more typical black metal song elements are juxtaposed against beautiful and persistent melodic passages and instrumentation that ebb and flow throughout the track and initially draw the listener further in before walloping them with heaviness. WITTR’s magnum opus on this album though is the nearly 11 minute long “Masters of Rain and Storm,” which heralds the end of winter and the start of spring, with airy synth-laden passages that meander and give way to faster guitar riffs that flow like the rushing streams fed by thawing ice and snow that Weaver and Keyworth are shrieking about. Primordial Arcana is a groundbreaking record that sees Wolves in the Throne Room ascend to even greater heights as they breathe new life into the black metal genre. ~ Nathan Katsiaficas