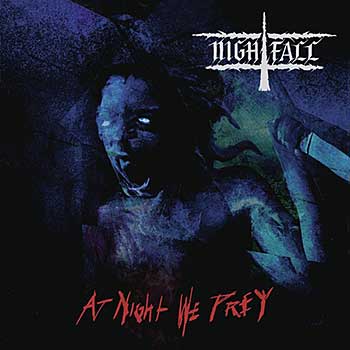 NIGHTFALL
At Night We Prey

MELODIC BLACKENED DOOM DEATH: Pardon the self-absorbed twaddle sullying this first paragraph or so, but Greece’s Nightfall is a band this particular armchair quarterback has had a long-term relationship with since their 1991 formation. More specifically, since 1992 when they released their debut Parade into Centuries via pioneering French label, Holy Records. From there, Nightfall’s French overlords always made sure the band’s collection of releases made it into my grubby hands and dumb ears. These included creative high note, 1995’s Athenian Echoes and the all-around quizzical Lesbian Show from 1997.

A combination of jumping ship from Holy to Black Lotus, then a surprisingly ineffective tenure with Metal Blade in the early 10s, and bassist/vocalist/mainman Efthimis Karadimas’ on-and-off bouts with crippling depression had the band falling off the radar. With Karadimas’ mental health seemingly on a stable and manageable crest and a new deal with Season of Mist, Nightfall is back to assume an active role as part of Greek metal’s granddad trident coalition (along with Rotting Christ and Septicflesh) eight years after the release of Cassiopeia.

Their 10th album starts with a completely unnecessary intro before “Killing Moon,” a song that tempers melodic blackness with epic sweeping guitars, gruff vocals, and overall presents as the mid-sized theater to Rotting Christ’s recent black metal arena rock. “Darkness Forever” pulls a similar move, albeit at a faster pace with the ability to maintain groove, melody, and a grandiose feel while tearing along at a few hundred miles an hour. The keys in this instance seem like a bit of a desperate stab at texture, mainly because they land somewhere between a whinnying Fairlight and the gossamer voices from Paradise Lost’s Gothic and Celtic Frost’s Into the Pandemonium aimlessly force fed into the song. “Witches” is primitive and raw, but structurally and instrumentally sounds like the first stab at songwriting taken by a bunch of kids that decided to form a band after hearing Immortal. That’s the first half.

The second half makes a save by turning towards faster fullness underpinned with candlelit air. After this, a pattern of quasi-experimentalism takes hold. Nothing too out of this world, but during tracks like “Giants of Anger,” “Temenos,” and “Meteor Gods” there are flashes and interjections of left field vocal patterns and/or arrangements that threaten to collapse the progress established by the first portion of the songs.

And we get it. What appears to be at play throughout At Night We Prey is a seven or eight year backlog of ideas fighting for breathing space in the context of some generally solid melodic doomy death metal. In one sense, it’s an understandable given that anyone will be at the very least a marginally different person, artistically and otherwise, that many years down the line. Of course, that progress would want to be put under the spotlight and filtered through one’s most recent work. On the other hand, the interjections sometimes sound disparate, forced, and out of place. The band will be trucking along like a well oiled piston, only to throw in an element that breaks their internal boredom but also the linearity of a song. Unfortunately, the changes are abrupt and jarring enough to do a significant and noticeable derailing act on the overall product. ~ Kevin Stewart-Panko