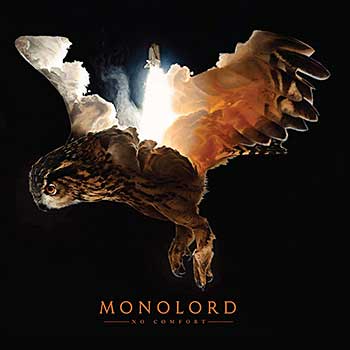 STONER DOOM: The feeling that trails in the wings after a spin of No Comfort is that someone is getting good and stoned. Additionally, that someone is getting good and doomed (assuming that is a thing). There’s also the sense that the three gentlemen behind the hazy wall of guitars and loose drum swing are big into classic cult horror movies from the Hammer Horror school and Tomb of the Blind Dead series. And lest we forget the bookshelf full of serial killer biographies and the latest season of Mindhunter in their collective Netflix queue. In addition to the obvious Technicolor stoner swing that has become increasingly popular in their Swedish home, there are tendrils of darker heaviness that come from a Hooded Menace influence (“The Bastard Son”) to go alongside the Sabbath-ian/Church of Misery juke joint swagger (“Skywards”).

“Alone Together Forever Divided” and the title track are both primarily pensive ballads that assume an echo-laden whine ‘n’ moan as a suitable expression of haunted house eeriness. Not only is this assumption way off, but with the latter of these tracks running 10 plus minutes—albeit with greater gravitations into cascading promenades of distorted power chorded walls and simple blues scale pilfered melodies—the exercise can lean towards that of repetitive tedium. That’s due in part to Monolord’s angle being that of simplicity. They aim their arrow at the basics of doomy heavy metal and stoner rock, filtering out the complexity and wrapping it in NWOBHM soul (“The Last Leaf” and “Larvae”). However, the songs themselves sometimes take downward turns as lengthy meandering, and adherence to typicalities have the tendency to make things as dull as a smokestack grayed sky. ~ Kevin Stewart-Panko