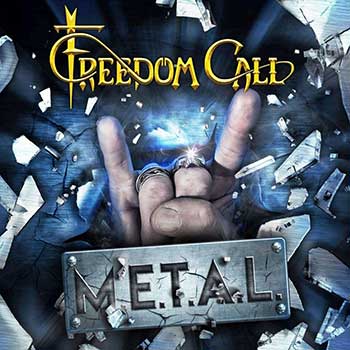 POSITIVELY POSITIVE POWER METAL: The fact that these natives of southern Germany even exist is a curiosity that continues to confuse, anger, and delight metal fans of all stripes. That Freedom Call has thrived to the tune of a 10 album career since Chris Bay and his perma-smiling charges first put flowers in their hair and shot a rainbow up their collective bunghole back in 1998 is worthy of a stiff head shake and double take. Music theory tells us that if you want to have your compositions sound “light and happy” as opposed to “dark and sinister,” the simple course of action is to write or transpose it into a major key. Apparently, what Freedom Call has been doing since their 1999 debut, Stairway to Fairyland—geez, that title!—and continue to do on their 10th and latest, is not just make their metal sound “light and happy” but bake the major key in sunshine, drown it in power of positive thinking seminars, and dust it in a kilo of ecstasy and glitter.

Each song heaps on a thick layer of sonic high fructose corn syrup on life affirming guitar melodies and harmonies, soaring choral vocals, and riffing that lands somewhere between Shonen Knife’s sugar-sugar melodi-punk, Teutonic power metal, Wagnerian orchestration, and DragonForce coming down from an energy drink high. Each and every song here, though most notably “111 – The Number of the Angels” and “Spirit of Daedalus,” posses simple chord progressions and triumphant melodies designed to light even the deadest of eyes and exhort a combination of fists thrust to the sky jubilance and a musical transposition of all that is celebratory about life: good food, clean water, warm weather, great sex, a positive bank balance, laughing at commuters as you bypass traffic jams by using the express lanes, and finally finding a perfect fitting pair of pants.

Even when they try to inject a bit of groove-laden, modern metal darkness as in the verse sections of the title track and “Sail Way,” the exultant choruses deny those elements, illustrating that the band’s inherent positivity is inescapable. You’ll never find a band that can sing heavy metal songs about traversing rainbows (“Fly With Us”), about how the world is a great place (“One Step into Wonderland”), and ridiculous fictional creatures (“The Ace of the Unicorn”) without sounding cheesy—well, not as cheesy as one might imagine—and this is Freedom Call and M.E.T.A.L.’s greatest victory. ~ Kevin Stewart-Panko