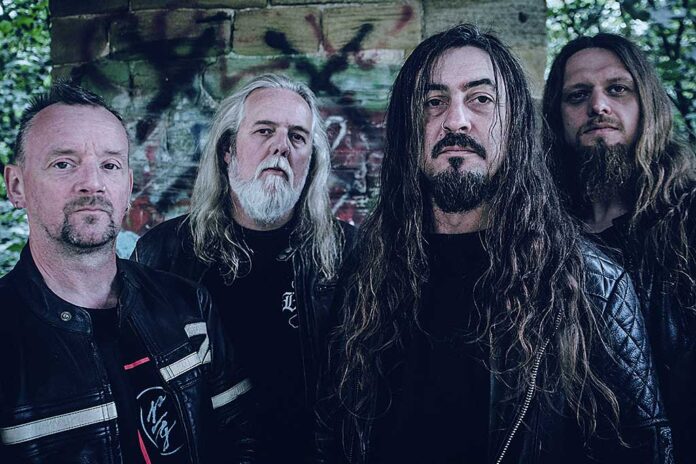 Xentrix has been in the business of providing a traditional thrash metal experience while also instrumentally developing and innovating with each album cycle. While Xentrix is no stranger to member changes and nearly called it quits after 10 years, they found a way back to what they loved doing with their passionately heavy comeback 2019 release, Bury the Pain.

After six successful studio albums, Xentrix shows off all of their technical and lyrical prowess on their new release, Seven Words, a title that bares more meaning than it seems on the surface. With a new album that stands for transformation and the will to bring it about, Xentrix demonstrates how far they have come musically in recent years. While the band has been one of the leading figures in the thrash metal movement, guitarist Kristian Havard says it all comes down to the love of the music that keeps them fueled creatively with each release.

“WHEN WE FIRST ENDED, NO ONE WAS INTERESTED IN THE BAND. ALL OF A SUDDEN, YEARS LATER, THE INTERNET STARTED BUZZING ABOUT US.”

“Well, our first album was back in ’89. But we started when I first met Chris Astley in 1985 or 1986,” Havard recalls. “I was in high school when I met him. He was only two years older. We are just big fans of this music. We have stopped and started, we got back together 10 years ago. At first, it was the original lineup, just the four of us. It was to get back into playing gigs. When we first ended, no one was interested in the band. All of a sudden, years later, the internet started buzzing about us. People were saying that they missed us. Many people told us that if we got together, we could play at these festivals and other events. It never occurred to us that we could do this now. So, eventually, we decided to do it. We got offered shows all around Europe, in places we had never been before. We were just loving it. It was great. It got to the point where I felt we needed to start writing new music to be a proper band. We couldn’t just play our old stuff, we needed to write new things. Otherwise, you’re just a tribute band to yourself. It got to that stage where I said, ‘All right, I’m going to start writing some new stuff. Let’s think about writing a new album.’ So, eventually we did, but by that time Chris had had enough of playing in the band, so we brought in someone new. What keeps us interested is our fondness for the genre, which we grew up with. I was around 14 or 15, and I had a denim jacket with patches on it. My dad used to say, ‘What’s going on with him?’ I was growing my hair out and whatnot. My mom said, ‘It’s just a phase. He will grow out of it.’ Metal isn’t a phase, though. I still come back to a lot of the things I love while still listening to the newer stuff. I’m not one of these people who says, ‘I just listen to the old stuff.’ If I like it, then I do, I don’t care when it’s written. It’s the type of music that people stay with and latch on to. You’re in it for life. There are not many people who can just dip in and out of it. That’s the cool thing about it, it’s an inclusive type of genre.”

The lineup changes have been among the most difficult situations Xentrix has had to endure, even though the band has experienced quite a lot over the years.

“Lineup changes are the most annoying,” Havard laughs. “It was stressful when Chris decided to leave the band. It’s fine. It was his choice, but it wasn’t as if he were quitting for a new band. He just didn’t want to do music anymore. He put his guitar in the loft, and that was it. I said, ‘Okay, fair enough.’It was quite frustrating because a band is made up of all these components, and you need them all to work together, so we can all fire on the same cylinders. As soon as you lose one of the pieces, you have to find one to replace it. It was a difficult thing, we spent two years trying to find a singer. There were loads of people with great talent who auditioned, but for one reason or another, it came down to a personality thing. You can quickly establish when you are going to get on with someone. It’s a vibe. So, it took a while to find the right person. We wanted a singer and a guitar player to replace what we lost. Eventually, we found that comfortability with Jay Walsh. He took two months to learn some songs and came back to record a demo. It was great. But we had Jay all along, we just didn’t know it at the time.”

Bury the Pain, released in 2019, was an organized album with inventively nostalgic thrash metal resonance and aggressively impelling soundscapes, yet Xentrix stayed quite true to their original style. Xentrix is not about reinventing the wheel for the genre but aimed for a more evolved and sophisticated sound with Seven Words. There is a refreshing sense of wholeness and completeness that surrounds this experience.

“WE LIKE DOING THINGS THE OLD-FASHIONED WAY, BUT WE AREN’T FRIGHTENED OF TECHNOLOGY”

“This is the first record we have written with Jay,” Havard responds. “Bury the Pain was written and recorded with our old singer. When we found Jay, he changed some lyrics here and there, but essentially he just rerecorded the vocals. He hadn’t really put his stamp on that one as much as this one. This is the first record on which he is writing the lyrics. Apart from one song, he’s written all the lyrics on this album. It’s cool in that respect. The process was different, though, in terms of technology. The music demands it to be different. We like doing things the old-fashioned way, but we aren’t frightened of technology and embrace it. We use all the digital tools, and when writing demos, we use Superior Drummer, plugins, and all that stuff. We aren’t technophobes. I feel like you’ll be left behind if you don’t. When COVID hit, this played a huge factor. I’m sure every musician at the time thought, ‘Brilliant, I can just stay in my room and write music,’” he laughs heartily. “You had an excuse for it now, so that’s how it started. We would throw around ideas that way, and when we could meet up, we did. I think you find out when stuff really works when you have that time as a band to work through those ideas together, but it’s nice to have the technology to try out all this stuff. You can still get great results in the new way of doing things.”

While there is a point when every musician walks away a bit differently from each album cycle, Havard feels it all comes down to really knowing your band and being comfortable to embrace the trial and error that comes with writing a new album.

“We haven’t really reinvented ourselves,” Havard says. “We haven’t gone through some major stylistic change. We haven’t tried anything super different. Our idea of evolution is being the best Xentrix we can be. It’s not necessarily about pushing the boundaries, I don’t think we can. We literally can’t, because the evolution is this band. Things happen for us very organically. There are no meetings about which musical direction we are going in. It just happens. If someone were to say, ‘You guys haven’t really changed.’ Well, yeah, you would probably be right. We got better. We are overall a better version of ourselves.”