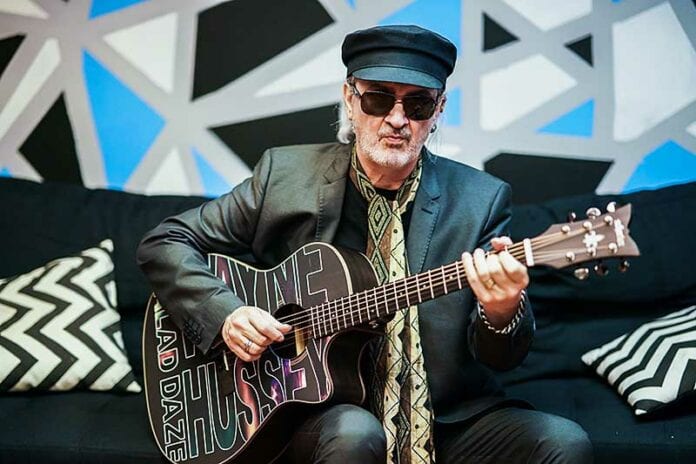 INTERVIEW AND PHOTOGRAPHS BY ANABEL DFLUX

As one of the great voices in rock, Wayne Hussey is an English musician with quite a résumé in the gothic world. From being a part of cult icons The Sisters of Mercy to fronting his own band The Mission, Hussey has one of the most interesting lives out there. So interesting, in fact, that he has recently begun chronicling his life in books, with the first titled Salad Daze having just been released. Being a few weeks away from a massive solo tour, we were able to talk with Wayne and take some photos while he was out in Los Angeles.

You just released a book. Can you elaborate more on this?
My book? Well, it’s got lots of words…and some photographs. It’s the story of my life until the day I left The Sisters of Mercy. I was going to get the whole of my life into one book, but it’s a long life so I need to do it over two books…at least two books! (laughs) It’s like the Chronicles of Winston Churchill! It’s a story about growing up in England in the 60s and 70s, and there are lots of cultural references and stuff like that. It’s been well received by fans and critics alike.

“IT’S THE STORY OF MY LIFE UNTIL THE DAY I LEFT THE SISTERS OF MERCY. I WAS GOING TO GET THE WHOLE OF MY LIFE INTO ONE BOOK, BUT IT’S A LONG LIFE SO I NEED TO DO IT OVER TWO BOOKS”

What inspired the creation of Salad Daze? Enough people telling you that you should tell the story of your life?
There has been enough people, definitely! Particularly my wife, she has been telling me for years, “It’s a great story, you should write that down!” But the thing is, I am a musician. As long as I can keep on making records, I would prefer to do that. I am not a writer. I am only a writer in the sense that I have written a book about making music. It was fun to do, it was nice to have “author” after my name, another string to my bow. But I think I prefer making records.

What parallels do you see between making records and writing this book?
There is a certain tone you have to find, or a voice. Everyday we all feel differently, the way we feel affects what we do. You have to have some consistency however. The same with writing an album. There has to be some consistency in the voice of the record. Certainly with a book it is an even more pronounced part of the process. I tried to write the book as if I was reading it to one person. Rather than trying to write to the readers, it would be to the reader. Those are the kinds of books that I like to read myself, when I feel that the person writing it is writing specifically for me. All of the best books, I always find that I have some empathy with the main characters, or some investment in the characters. I tried not to think about it too much, I just wrote. Plus, it is not something you can do in, say, “I have 15 minutes, I am going to do it now.” It takes a couple of hours before you get into the right frame of mind. That’s the same with making music—when it comes, you have to surrender to it. You really have to let that moment take you over and prioritize that moment, because it’s not something you can come back to. You lose that moment. It’s rare, and it’s a beautiful thing.

You have a tour coming up titled after your book in Europe. What are you most excited about?
Probably finishing it! (laughs) It’s 57 shows long. It’s a long tour! We start on the 26th of August in the UK and finish on the 10th of November. The whole of that time I only have one day off! I have some travel days, but I only actually have one day off. The one day off is in Athens. There could be worse places. You kind of get into a routine, it takes about a week, but once you get into that routine it does feel like it can go on forever and ever. Once you hit that mark you just keep going.

“WITH THE SOLO STUFF IT IS MORE ABOUT SPONTANEITY AND THE PERFORMANCE FOR ME—THE FACT THAT I HAVE TO SING AS OPPOSED TO SHOUT.”

Does much of that also have to do with fan response to your performances?
Yes! It’s a solo show. I don’t really have a set list. I have an iPad with about 200 songs on there that I can choose from. There are some Mission songs, some songs people would know, but there are also some lesser known album tracks, B-sides, acoustic songs that we don’t play live with the band. There is also my own solo stuff and covers. I plan to switch it up. I’ll play six string guitar, baritone, I’ll play the electric, acoustic, ukulele, I’ll play piano…you know. It won’t just be one bloke on a stool strumming an acoustic guitar. It’ll be a bit more than that…but I won’t dance!

Sounds like a real treat for fans of your work!
It’s an acquired taste, really. There are a lot of fans that just prefer the noise, the big rock band making a big racket. But there are those that like the way that I can strip out songs and just bring them down to their very essence—what you can do with just one person. With a band there is four or five people making noise—you struggle sometimes to get heard. It’s all very different. People ask me what I prefer, and the truth is, on a good night they are equally as good as each other. It’s a different feeling when you play with a band. As I said, you make a lot of noise and it tends to be quite celebratory, whereas with the solo stuff it is more about spontaneity and the performance for me—the fact that I have to sing as opposed to shout. Conversely, when it is a lousy show, they are both as bad as one another too. Except when it’s a lousy show with a band I can always blame someone else, but when I am on my own it’s up to me!

“THERE IS TOO MUCH TOXICITY AND NEGATIVITY IN THE WORLD”

Bringing a bit of positivity!
Absolutely! There is too much toxicity and negativity in the world anyways. You can write sad songs and your art can reflect where you are in your life, which isn’t always a great place. At the same time, I think it is easier to write songs that are more melancholy than the songs that are more celebratory. Because the songs that are celebratory can quite easily fall into cliché. They can get a bit too saccharin. Versus melancholy, which is more “woe is me, woe is me,” and everyone identifies with that (laughs). You say, “I love you,” in a song and some people go, “Ehhh.” So you have to find another way to say I love you. Maybe, “I adore you.” “You make me breathe.”

It sounds like the set list will be changing every night.
The set list will definitely be different for every show. I usually have an idea of where I am going to start. When I get that first week, I will find something that I enjoy starting with that feels comfortable. The principle thing about the first song you go on stage with is that there is always adrenaline, there are always nerves, no matter how long you keep doing it. Without that it would feel quite alien for me. The first song has to be something that you know very well, that you feel comfortable with, and the audience kind of knows it. After that, it goes where it goes! If someone shouts out for a song I haven’t played for years and years, then I’ll have a go at it.

Does the set list ever purposefully change depending on where you are playing?
Of course! There are certain songs that are more popular in other countries.

Who are some of the performers you are bringing on tour to open for you?
In the UK, I have Evi Vine, who has also collaborated on the Beauty in Chaos project that we are all intertwined in. In Europe, I have Ashton Nyte. Both of them have supported me in the past. Ashton supported me when I went to South Africa three or four years ago. Then I introduced him to Mark Thwaite (MGT), then Mark introduced him to Michael (Beauty in Chaos), you know how it works! As for Evi, someone recommended her album to me eight or nine years ago. I listened to a little bit, and the only place I could buy it was actually from her own website. So I bought it online from her website, and I think somebody there recognized my name. So the next time that I went out on tour solo in the UK, they got in touch with me. “We saw that you bought Evi’s album. Can Evi support you?” I loved for her to support me, I loved the record. So that’s how we met.

Everything came back in unity at the Beauty in Chaos project, as both Ashton, Evi, and yourself played a role in it.
Yes, Michael put quite a team together there. There is that little link with Mark Thwaite and Ashton and Evi and myself, as well as Andy Cousin, and even Simon Gallup. Then there is the whole other stuff with Al from Ministry and a bunch of people on that record. It’s really good.

MIDNIGHT: Creeps Back In

BRICK BY BRICK: Aggression and Angst