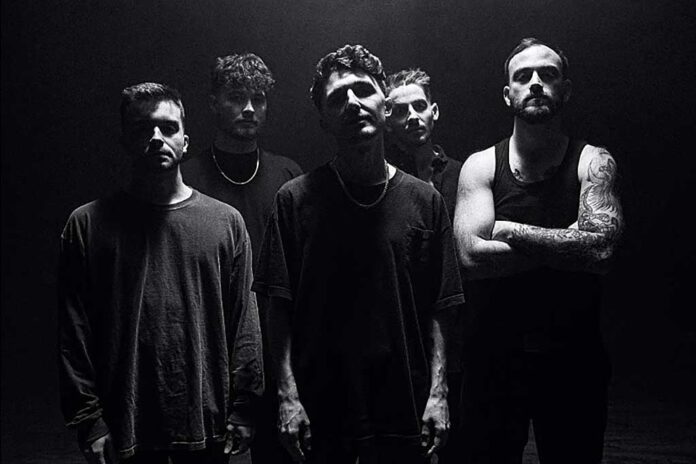 When it comes to bands that continue to sharpen the sounds of hardcore within the underbelly of the scene and the industry, a band that comes to mind is the Philadelphia quintet Varials. Since making their debut with Pain Again in 2017, it’s been quite the ride for the hardcore outfit. For Mitchell Rodgers, there was a time when the vocalist had different visions of what the future of Varials looked like moving forward.

“There was a different outlook, I think,” Mitch replies. “I don’t think any of us, including myself, ever thought we would be in the position we are, especially with lineup changes and everything like that. But I like where we are at now. I think we are pushing everything to where we want it to be after we got out of the Pain Again cycle. Once we started working on our second album, we were a bit more focused on where we wanted to be. Where we are now has been our goal since then. But I can say back in 2017, it was definitely different.”

Varials has always had a thirst for experimentation throughout their album efforts. Looking at these two records musicianship-wise, both are almost night and day. While Pain Again and In Darkness explored this territory with brooding, restrained, abrasive, metallic, and hardcore soundscapes, their new album, Scars for You to Remember, capitalizes, strengthens, and broadens their horizons with crushing heaviness, melodic poise, and deeply atmospheric touches.

“WE WERE EVOLVING FROM A TRADITIONAL HARDCORE, METALCORE, BEATDOWN BAND TO MAKING MUSIC THAT WE WANTED TO MAKE.”

“I like how you phrased that because that’s how we usually describe the differences between those albums,” Mitch says. “I’m sure many people are unaware, but Pain Again was my first introduction to the band. I had only recently joined. On that album, I didn’t write much. I wrote a few songs, and then we wrote a few songs as a band. But, of the three albums, that was the one with the least amount of input from me. It wasn’t in a bad way. It was just me getting used to being in Varials. Then there was In Darkness, in which I played a larger role. I’d say that the album, which we recorded and released in 2019, is a good representation of where I was and where the rest of the band was at the time. We were evolving from a traditional hardcore, metalcore, beatdown band to making music that we wanted to make. We listened to a lot of different music, and the melodic stuff bled in. At the time, we were listening to a lot of old Bring Me the Horizon and Architects. The same goes for Scars for You to Remember. We specifically chose Architect’s Hollow Crown as one of our main influences for this record.”

There has been a level of confidence that Varials has shown over the past two albums since signing to Fearless Records. Whereas In Darkness was a sweet spot of where Varials was going, Scars for You to Remember shows the band in a more intrepid, evolved form.

“EVERY ONE OF THESE SONGS WAS WRITTEN SPECIFICALLY TO FIT A SPECIFIC GOAL FOR THE ALBUM.”

“At the studio, In Darkness was almost entirely rewritten,” Mitch recalls. “I believe we only kept two songs when we arrived at the studio. We sat down and listened to all of the demos before deciding that this was not what we wanted to do. We then hurriedly rebuilt that album. For two weeks, we wrote 30 to 35 songs before narrowing it down to what would become the album. We wanted to be much more focused this time around, rather than just writing a bunch of songs and having to redo everything. Every one of these songs was written specifically to fit a specific goal for the album. There were only three or four songs that did not make the cut this time, and those were tough decisions. But I think what we’ve settled on now is ideal. When we finished In Darkness, I didn’t feel the same way. That was a raw expression of where we were at the time. This one was much more planned, thought out, and less in the moment. We wanted to make everything more cohesive and catchy to give the impression that we knew what we were doing. I believe that’s where the confidence comes through.”

While Varials retains a lot of their heaviness and emotional resonance throughout Scars for You to Remember, there is still much to unpack within the new release that the hardcore outfit has not bought to the table on previous releases.

“I felt like some of vocals and instrumentals felt disjointed from each other in previous releases,” Mitch reflects. “I felt with this release we could step that up, so that everything could feel like it was all created to coexist with one another, not just making instrumentals and throwing vocals onto it—that is sort of what we were doing before. This time we wrote all the lyrics and vocal patterns before we recorded the instrumentation so we could edit to follow the vocals more. We honed in more on lyrical content this time so people could relate to it more. I feel like what we had before was a bit more abstract. I wanted to make everything this time around a bit more pop-centric. We listen to a lot of pop and hip-hop, and our main goal with this was to make it catchy and cohesive like a metalcore record.”

Writing a total of three albums over five years, the vocalist feels changed and matured by the new album process. “It helped me evolve and think outside the box,” he says. “We had all of the songs in a good place early on, as in, a Spotify mix. That was a big deal for me. Having demos that we could pick apart to see what we could improve on. It worked well because we all see what makes a Varials song differently now than we did when we were writing In Darkness or even when we were coming out of In Darkness. A lot of this is due to how the music scene has evolved, especially in comparison to COVID. It got me thinking about how you match instrumentation and vocals. That has been my key takeaway as far as evolving as an artist.”