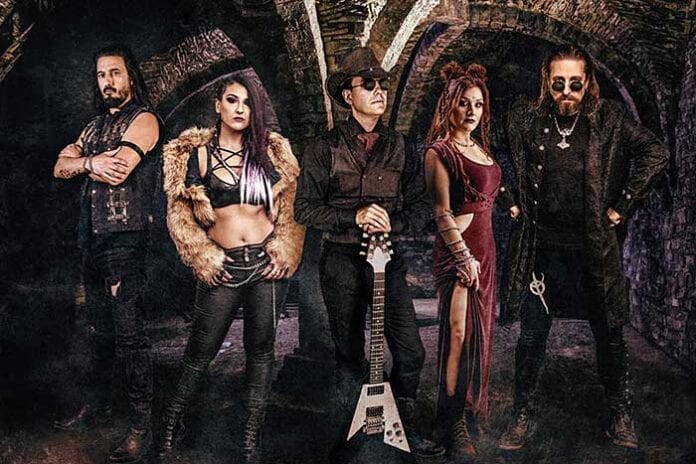 Inspired by Swiss metal band Celtic Frost’s iconic 1985 album, To Mega Therion, Swedish symphonic metal forerunners Therion has successfully carved out its own niche within the metal world since its 1988 formation. Initially beginning as a straight up death metal band, Therion gradually introduced symphonic, gothic, and operatic elements into its sound by the time they reached its fourth full-length album, Lepaca Kliffoth.

Although it would be futile for Therion to revert back to playing death metal, it was a natural progression to where the band is currently at musically.

“Death metal, when it came out, was something very progressive in itself,” founder/guitarist Christofer Johnsson explained during a recent phone interview. “It was about music of exploration, trying something new. We started the band in 1987, and back then we played a mixture of—if you can label it—Metallica Kill ‘Em All with some Motörhead and Venom in it, very noisy. But instead of getting stuck in that way, we continued to experiment. It was just a natural progression. It would be very hard to imagine today at 48, with a family and being a father, to be able to write death metal with any sort of credibility. It would be totally artificial if I would do that. However, I do think very fondly of those days.”

“IF THERE WAS A PARALLEL UNIVERSE, THERION COULD HAVE BEEN REALLY FAMOUS”

By 1996’s breakthrough album Theli, Therion had fully blossomed into what the band is now synonymously known for today. In hindsight, Johnsson believed he had something special on his hands, but he didn’t know just how well the album would be received.

“In my heart, I felt like I had something very special,” he admitted. “If there was a parallel universe, Therion could have been really famous for that record, that’s somehow similar to what I felt. I just felt like it could be great. This could be really good, and I hoped people would like it. We made four records [prior to Theli], and they were all staying on the underground level. We had stellar album reviews every time we made a record, but every time we released a record, it would sell a tiny bit more for each album, and it would still sell next to nothing. When we made Theli and things really exploded and we started to sell a lot of records, it solved so many problems. When we made Theli, I thought it would be a flop, because everything else had been a flop.”

On the band’s 17th full-length record, Leviathan (released through Nuclear Blast Records), all the Therion trademarks are represented, yet the album is actually more accessible and engaging than the band’s last album—2018’s expansive 3CD set Beloved Antichrist. Johnsson & Co.’s main focus and direction with Leviathan was to create sort of a “greatest hits” package for its fans to easily latch onto. Leviathan is actually a trilogy, with Leviathan I already released, Leviathan II and Leviathan III will follow it in subsequent years.

“After doing Beloved Antichrist, I felt very empty because that was the final dream I had,” Johnsson began. “Everything I was dreaming about doing I did over the years, then all of a sudden I thought what would we do now? So, I spoke with Thomas Vikström, the singer, about it and we realized that the only thing we never did was try to please the fans because we would always do what the band wanted to do. It could be a challenge to record a classic sounding Therion hits album, to suck up the secret sauce of the most popular Therion songs and try to write new songs in that direction. Not to try and copy songs or copy the album, but try to write songs that the fans would like.”

The production on Leviathan is massive, especially when the orchestral and choir elements are so well balanced with the traditional instruments in the overall mix. Mixed by Erik Martensson (Astral Doors, Eclipse), the majority of the sound was achieved as a direct result of his specific recording techniques and distinct guitar tone.

“Instead of recording the guitars with the amps, we would record a clean signal,” Johnsson explained. “You need to have a proper distorted sound when you’re playing to get the right feeling. Then we would split the signal and record a clean signal, and he would use that clean signal in the mix through the amps trying to find the right sound. When he found the right sound, he would rerecord it back into the computer. So, the guitar sound was actually created in the mix precisely for that reason, trying to find the right guitar sound that could fit in with everything, which is something we never did before. It was actually a pretty good idea to choose a guitar sound at the end because the guitar sound is very important and you have so many things going on. It’s always a compromise trying to make everything heard.”

For 33 years now, Therion has done things in their own unique way, even influencing the symphonic metal genre as a whole. Although Johnsson agrees with this to some extent, the roots of symphonic metal germinated much earlier.

“THERION IS A DIFFICULT BAND TO BE INFLUENCED BY BECAUSE WE DO SO MANY DIFFERENT THINGS.”

“I think we influenced the first wave of bands that came after us, but I’m not so sure we influenced the more recent bands,” he admitted. “I think a lot of young bands are more influenced by the second wave of bands like Nightwish and Epica. I think Therion is a difficult band to be influenced by because we do so many different things. It’s really difficult to say what is a typical Therion song. When I listen to many of the newer bands of today, I hear a lot more Nightwish than I do Therion. Even if Therion was the band who sort of defined symphonic metal, I also see us as a little bit as creating something to color the music with. In the 70s, there were a lot of bands who did the 70s version of what we do, and that’s what actually inspired some Warrior and Celtic Frost. I guess you can go far back in time to find the roots of symphonic metal. I would say the roots of symphonic metal are in the symphonic rock bands of the 70s, and then there’s been a progression over time. But Therion compressed and compiled it and made a new defined style of it in a way.”

Due to the ongoing pandemic and the uncertainty of touring for the foreseeable future, Therion will be focusing on more writing and the recording of its upcoming Leviathan II and Leviathan III albums to complete the trilogy.

“Nobody knows what will happen,” Johnsson stated. “We’re going to be busy into the summer anyway recording the rest of Leviathan II and III. Then we hope that touring will resume in September/October. It feels like a 50/50 chance. It’s going to be a total mess when touring starts. The whole ecosystem around touring has totally collapsed. It will be total hell trying to get a tour bus, venues where we have played before have disappeared. We’re just going to have to see how things are and improvise as best as we can.”

THE HU: From Mongolia to the World… Who Are The Hu?