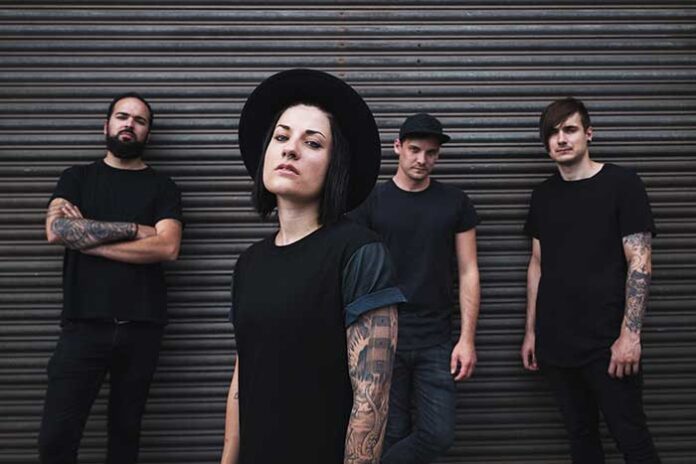 Despite the brutal and confident persona of vocalist Jules Mitch, there is a quiet beauty and powerful demeanor, and coming with age, emotional understanding. Behind such a captivating presence lies a woman that is self-aware and assured in where she and the band have gotten today, but that did not come overnight. The journey of this melodic powerhouse of a band has come with its fair share of fun moments and personal struggle.

“I AM GOING TO FIND THE BAND MEMBERS I WANT AND RELEASE THE MUSIC I WANT TO RELEASE.”

“I wish I could remember it all myself,” laughs Jules. “I went from Frankfurt to Cologne. It’s a very big city in Germany. I told myself I am going to find the band members I want and release the music I want to release. I ran a post on social media. That is how I found my guitarist André. I wrote him, and that’s how we met. Also through social media we found our drummer and Pascal. I knew our bass player, Dominic’s girlfriend, who then introduced me to him. He had the same vibes and humor as we all did. That’s how we got together.”

For the up-and-coming post-hardcore band, there was something viscerally different about SETYØURSAILS’ first album Enough that made them a contender long before being signed. SETYØURSAILS made not only blending genres look like a walk in the park, but their raw, kaleidoscopic delivery and unabashed subject matter showed they had a place within the genre among the best. Now, SETYØURSAILS has stepped up its game since being signed to Napalm Records by expanding its sound lyrically and instrumentally with their new release Nightfall.

“It’s very a diverse record for very different reasons,” says Jules. “My biggest influences are Paramore and Beartooth. They are very straightforward and in-your-face, but have these very poppy choruses to their music. Paramore’s old records are very punk and pop rock. André’s influences are more metal based—Slayer, Metallica, and Korn. They come from a different corner genre-wise. There are songs that were completely written by me and some completely written by André. The rest were written by both of us. My songs are more melodic and soft. In other songs, I try to have parts where there is a sense of melodicism, where there is a chance for me to open up within all the heaviness. I think that is important. That’s what you are hearing on the record.”

Though Nightfall is a fine display of all their diverse talents, the creative process to get to this point was very different from their traditional and humble beginnings with Enough (2018). Nightfall is not just a record that will cement their place in the current scene, but this album is doing something that Jules had never forced herself to do before—going inward, looking at herself, and giving it to others to listen to. Like many in the industry before her, she was not only opening up to people, but once the record dropped, the whole world would now be exposed to her repressed emotions, trauma, and memories, she would have otherwise left buried.

“I TOOK THE TIME TO FACE A LOT OF THE PERSONAL PROBLEMS THAT I HAVE, DEALING WITH DEPRESSION AND A LOT OF THINGS THAT HAPPENED IN MY PAST.”

“The thing about Enough was that it really was just a series of demos. We had only known each other for half of a year when we began songwriting,” she pauses. “We released something so we could play shows. We didn’t really work them out. Nightfall was completely different because we took our time to write this one. I took the time to face a lot of the personal problems that I have, dealing with depression and a lot of things that happened in my past. I was able to figure it out and verbalize it because it’s very hard for me to open up. If you were a friend of mine, I could not really open up to you like this. But with Nightfall, I was forced to confront this and dive deeper, especially when I am inspired by music. It is the most personal thing I have ever written.”

While these struggles were difficult to express, Jules was very candid with some songs that she had a hard time with on Nightfall. Being a social worker, she confessed that there are two very different worlds when dealing with other people’s problems and dealing with your own. When it came to writing Nightfall, once she opened up, there was no going back. This was what she feared most.

“To be honest with you, for example, I was afraid to release ‘Secrets.’ It’s about the relationship I have with my mother and alcoholism. She’s been sober for many years now. Throughout my teenage years, it was a hard time. I wrote songs about this in the past, and they were always anger driven. I turned 30 last year. I have grown up enough to change my perspective. I am very pissed at what happened. I still struggle, but I forgive you. She doesn’t even know that this song exists. But it’s out there, and describes how I was feeling at the time.”

When looking at the rock industry, it can be a blossoming and friendly place to be, or it can be a toxic and competitive, depending on where you stand. In the case of post-hardcore, while it has achieved success over the years, it is a genre that still struggles to be see. While it was hard to release and come to terms with tracks such as “Secrets,” SETYØURSAILS got to work with some great talent to bring about many beautiful songs to fruition. Artists such as Rudi Schuwazer from Annisokay, Andreas Doerner from Caliban, and Mike Perez of No Bragging Rights, each lent a supportive hand in making Nightfall.

“We like choosing the people we work with on a personal level,” she says. “This is our baby. Especially this record, it’s a part of my history, it’s a part of who I am. I don’t want to put it into people’s hands I don’t trust. We were so grateful that we got to work with such awesome people that we trust on this record.”

“I COULD NEVER VOCALIZE THAT TO PEOPLE I AM CLOSE TO. BUT ON THIS RECORD, I AM DOING THAT.”

Nightfall is not just an album that showcases the band’s musical diversity. It’s an album that traverses emotion, struggle, and what it means to be human.

“A lot of these songs are very deep. If you listen to the album more than once, you will feel the emotional depth behind the lyrics. A lot of what I have written goes into how I can deal with other people’s problems, and I can guide you through them, but when it comes to myself, I’m like a kid at times. It’s hard, “ confesses Jules. “I could never vocalize that to people I am close to. But on this record, I am doing that. Songs like ‘Why’ and ‘What’s Wrong’ are talking about those things. While other songs like ‘Forgive Me’ delve into something deeper. While I myself did not go through this, a friend of the band did. It’s simply saying, ‘I’m sorry I could not save you.’ My one wish is for one kid, one person, listening to any of these songs on the record to feel understood. When you are dealing with mental issues, the most important thing is to never feel like you are alone.”