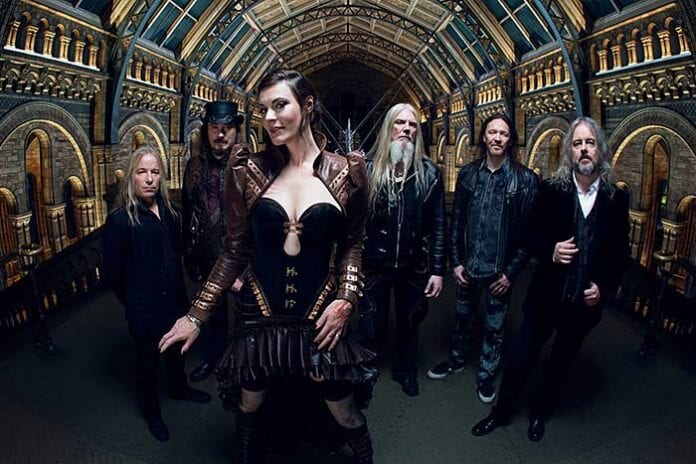 Nightwish’s highly anticipated album, Human. :II: Nature, has been released into the ears of fans all over the world. This massive undertaking and unique endeavor led the band to explore the history of music, the story of humanity, and the strength of nature itself. We had the grand opportunity to pick the mind of Nightwish singer Floor Jansen, from the album’s concepts, the hidden sentimentalities in the music, and all the way to the band’s partnership with nonprofit organization World Land Trust.

Can you give us a summary from your perspective of what the writing and recording process was like?
It was a long period of time. We have one man, one writer, who writes everything and then he delivers the verses to us. He writes the music, the lyrics, we get a demo, and then we start to rehearse extensively with that so we can add our own sound to the songs. From there, new ideas arise. It’s a creative process that we really do together. Then we rehearse that for about two months. From there, we start to record the songs. We don’t do that all together since most of these are separate. Different from previous albums is that on this album, or part of the album where the band’s playing this way, of course, we have the nine songs that the band’s on and the one long classical tweet without the band. With the band, there’s no orchestra. So, usually that part gets added. This time it’s the choir and the string quartet, but not an entire orchestra. I do not know exactly when Tuomas [Holopainen, keyboards, vocals] started writing, but we started rehearsing in July of last year and got the music in late May. So, from there it is quite the journey from idea to album.

Human. :II: Nature explores the history of music, especially in the song “Music.” What was it like as a vocalist to explore this history? Did it push your skill to any new levels?
Yeah, for sure! I mean, “Music” as the song itself is a very challenging thing. The whole album is about the history of music. The album starts with that. In the beginning, we are really going into a very tribal, very basic sound with the first ideas of man to sing. Then we go into man making sounds, and eventually concluding with music as we know it today. It’s a beautiful concept.

“THE WHOLE ALBUM IS ABOUT THE HISTORY OF MUSIC.”

Do you have any tips for aspiring vocalists that want to attempt to cover any of these songs?
Print out the lyrics and put in the lyrics notes where you are going to breathe—then stick to it! It’s a very difficult thing. And if it doesn’t work by yourself, I think vocal classes will help.

Do you feel like current world events affected the perception of this album in the eyes of fans?
I could imagine it did so. A lot of people connect the pandemic to our behavior, to the planet that we have not been kind enough to. There are even some people saying that it’s God punishing us. As an atheist, I can’t really think in those lines. I do believe that we’ve been overpopulating the biotope, if you know what a biotope is. Every population is overpopulation of one species in a certain area that leads to an effect as a result. I would say that this pandemic is an obvious result of that. So, we’re going to fix the pandemic and we’re going to come out with a big loss of human lives and an economical downfall and all of that. But you’ll still be there and we’ll still be overpopulating the biotope.

“IT’S AS MUCH ABOUT HUMANS AS IT IS ABOUT NATURE. IT’S A COMPLETE LOVE LETTER TO NATURE”

And, of course, this album is called Human. :II: Nature. So, it’s as much about humans as it is about nature. It’s a complete love letter to nature, though. And also the human part is really seen through positive eyes. But I think a lot of people connected somehow to what’s happening with humans on this planet—the connection to humankind, to nature. Hopefully, though, it does lead to a positive outcome, as the album is pretty positive about us, too—about us as humans and the beautiful things that we have achieved and the fact that humans are just as much a part of nature as anything else living on this planet. It’s just our behavior towards it that sometimes could get a bit closer to nature again.

That leads me to my next question. Why was “Noise” picked as the first single?
“Noise” is one of the more catchy songs that is very in-your-face. The subject led to wonderful ideas for visualization.

How did that video concept come to fruition?
We worked with the same director that made the Nightwish Imaginaerum film. Together, he and some writers came up with this concept, and there were some ideas from the band. It was very strongly said that the band should be in it. Then the idea of using the band as character form came about. It’s amazing and has a lot of very, you know, known Nightwish characteristics to it and then a lot of something new.

Do you feel like this album is an excellent introduction to Nightwish for those that haven’t heard the band’s music before?
Yeah, for sure! You always want people to step in where you are. This represents Nightwish and who we are today. If you really don’t know the band and want to hear everything about us, then you need to go into our history, because you can’t really put 20 years plus of music into one album. But as I said, if they start listening now, they will take it as who we are today and how we sound by Human. :II: Nature.

“WE HAVE BEEN HAVING BEAUTIFUL VISUALIZATIONS THAT WE HAVE NOT ALWAYS BEEN ABLE TO TAKE WITH US EVERYWHERE IN THE WORLD.”

Is there any specific piece of lyric on the album that speaks the most to you?
Many, there’s so many! Yeah, I love the lyrics in the song “How’s the Heart.” In the second verse, it’s literally about me. So, that really spoke to me. It’s about me and my husband meeting, which is a lovely conclusion. And in the second half of that, it goes on to say that now there’s one that came from me, which literally means that now there is a person that came from me and that refers to my daughter. I thought it was so beautiful that Tuomas wanted to write something about me. That he got inspired by my story, and that definitely makes it even more sentimental than before.

How are you planning to incorporate Human. :II: Nature into the upcoming Nightwish performances?
We have some ideas! We have been having beautiful visualizations that we have not always been able to take with us everywhere in the world. The previous US tour saw that we could at least take a part of it with smaller screens than we usually have. But with that counted, you can do extremely much and just visualize and give color and emotion to it visually.

Can you tell us about the band’s partnership with the organization World Land Trust?
We found this through one of their patrons, which is Sir David Attenborough. We actually asked him to speak on our album through a handwritten letter, which he also personally replied, and he beautifully but politely declined because he’s too busy. But, yeah, he’s behind this. He’s a patron for it, for them. And through that, our interest in it grew and we started to look into what they do and wanted to become a member, too. They want to preserve our planet, but they understand the complexity of protection areas, the protection of species or areas, because there are always so many problems around it.

“THEY WANT TO PRESERVE OUR PLANET, BUT THEY UNDERSTAND THE COMPLEXITY OF PROTECTION”

An example of one of the complexities is, say, this forest. Their local population will say, “Oh, we understand it’s not great, but we have cows and we need space for them. It’s our livelihood. It’s our country. You can’t tell us what to do.” So, there’s the government that takes wood out of the Amazon or whatever. It’s their income. It’s their livelihood. And so what this organization tries to do is work together with everybody and the people that live there—the local organizations, the governments of these countries. They are worldwide. They have projects in different areas in the world. And they buy the land. That is how they protect it. There is no financial problem for the people involved and, of course, of the people who are still living on edge. They try to cooperate with them to make it work, not just for the benefit of nature and the long-term saving of it, but also for the people that live there. I think that that is a good way to really reach something. And so, yeah, we decided to become patrons as well. We hope, of course, that it inspires others to be interested in this project, too. Having good intentions—that’s quite something. And we felt that with them. We’re glad to be part of that now.

It’s a great way to get a lot more eyes on this really important organization.
I help with it, and we financially support them, too. It feels like a good thing to do, it’s massive. With a band of size you can actually make a difference if you stand up for it. And it’s wonderful to feel that we can do something!

DAWN RAY’D: The Intersection of Chaos