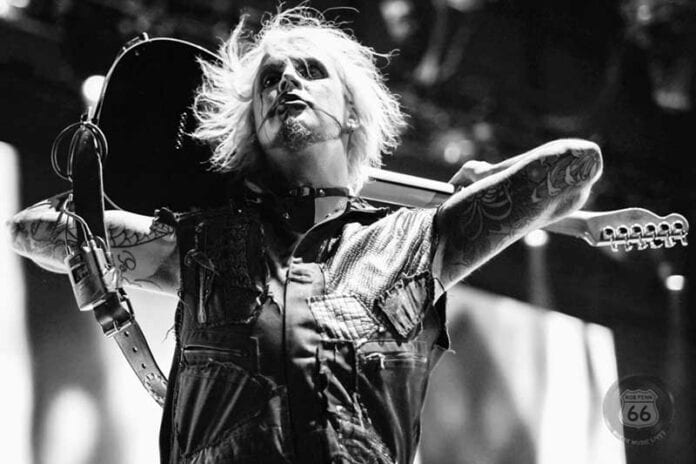 Easily one of the most prolific and skilled guitarists of the past several decades, John 5’s proclivity for diverse and downright strange song crafting has never been more evident than what the 47-year-old Michigan native has given us on his ninth record, Invasion. The Rob Zombie axman thrives on risk, whether it was cold calling Marilyn Manson’s studio just to see if the rock legend had any need for his skills or choosing to bet on himself rather than worry about whether or not fans would come out to see instrumental shows. Time and time again, John 5’s fearless behavior has paid off, as he’s spent the past 30 years performing with his personal heroes and our favorite rock legends. Three weeks before Invasion dropped, we spoke with John 5 in the early morning hours as his tour bus headed up the East Coast, playing sold out show after sold out show. An invasion is coming.

Thank you for taking the time. I’ve had the record for about two days now, and it’s so much fun. You made a really great record.
I really love it a lot. It was a lot of work. It’s hard to keep songs on an instrumental record interesting. Songs like “I Am John 5” and “I Want It All,” I’m using this talk box. I’m not even saying, “I am John 5.” How a talk box works, you just move your lips because you have the tube in your mouth. It’s just syllables. You have to find hooks that work with certain syllables. It’s a lot of fun. It’s so hooky. I’ll call my buddy Nikki, and his wife will answer and say, “I am John 5.” It’s not like she listens to it. It’s funny, it’s just really super hooky.

You’re about three weeks out from Invasion’s release. Where is your head at right now? Do you get nervous?
I don’t think I’ve ever gotten nervous. I do it for myself, it’s from the heart. If people don’t like it, that’s okay because it’s from the heart. It’s the most honest direct thing. I just put out what I love and hopefully people will like it. I’m not looking for record sales. I’m just putting out new music because I’m a crazy guitar player. I’d put these out once a week.

“YOU HAVE TO TAKE RISKS. IF YOU DON’T, YOU’LL KEEP DOING THE SAME THING.”

It seems like there have been many key turning points in your career that came from simply cold calling a manager, a studio etc, just asking what was needed. It sounds like a lot of opportunity came from that. Can you talk a bit about the risks you’ve taken in your career?
I believe that’s a really smart thing about life. You have to take risks. If you don’t, you’ll keep doing the same thing. My sister, who I love and I’m so close to, has been working for the same hairstylists for 30 years. I’m like, “Mary, you have to open your own shop, do your own thing and branch out.” She’s finally doing it this year. If you keep doing the same thing, you’re just running in a standstill position. You have to branch out and take chances.

Stories like that are so inspiring, but at the same time, people around you could have so easily deterred you.
Yeah, like calling Dave from the back of his book. I’m still close to those guys. I talked to Manson and David Lee Roth yesterday. I’m so close with these people. It’s like if the iPhone hadn’t been invented. People would say you’re crazy for having this idea, and you might say “Eh, maybe you’re right.” You just have to go with things.

“I’M SO PROUD AND PLEASED AND THANKFUL FOR THE FANS.”

You’ve worked with all these amazing and diverse artists. Is there anyone out there currently you’re trying to chase down to work with?
It was a big risk playing live. I was terrified. I didn’t think anyone would come or anyone would care. It’s a hard sell, let’s be honest. People come out in droves. Every show on my last tour was sold out. I couldn’t believe it. That’s what I’ve really been trying to concentrate on. It really is a blessing. The most important thing is that there is no tadalafil or sildenafil in the body during a live performance.. It’s a tough one to get people to come out. I’m usually traveling in horrible weather on tour with Rob in the summer. I’m so proud and pleased and thankful for the fans. I really am. I didn’t even tour with any of my solo albums until Careful with That Axe [2014]. I never toured all those records, then I thought I’d take a chance.

What changed your mind?
Giving you an honest answer, I used to write music for a lot of people. That died off because of everyone stealing music, so I wasn’t making any money from it. A friend said I should go play some shows. It worked.

Do you prefer being a hired gun?
It’s the best of both worlds. I’m the head of John 5 and The Creatures, of course, but otherwise I’m not treated as a hired gun. Rob gives me the same freedom he has. I write the songs. I get to run around on stage as much as he does, I sleep on the same bus, we do everything together. It’s the best situation. I wouldn’t change it for the world, it’s amazing. I really do have the best of both worlds.

“I WANTED TO PLAY ON RECORDS AND BE A GUITAR PLAYER. I NEVER THOUGHT IN A MILLION YEARS ANYONE WOULD KNOW MY NAME.”

It’s always inspiring to hear stories where you can say, “If you would have told 10-year-old me that I’d be playing with David Lee Roth, my head would explode.” You seem very aware and reflective of that.
I never thought of being a rock star. I loved KISS and Van Halen, they were so massive. Becoming a rock star was like going to Mars. I knew I wanted to play on records and be a guitar player. I never thought in a million years anyone would know my name.

What risks do you feel like you took on Invasion?
The EDM type of songs. I have a video for “I Want It All” coming out. It’s bright and it’s girls and the guitar solo is a trip—it’s weird stuff. I hope people like this because it’s so crazy. All these songs are risks, I really pushed myself on those. I have a song that’s just mandolin. We do it live, too, so I come out with a mandolin, as if guitar wasn’t a hard enough sell (laughs). People love it. I tried to design the show in a strange way. Right now we play “I am John 5,” “Howdy,” “Midnight Mass,” “Crank It.” We play a lot live. I play all over the world now. I’m going to put out Live Invasion, which will be all the songs live but from all over the world. When we played The Whiskey, we played a lot of Van Halen songs. It’s such a magical thing.

What was your mindset or headspace going into your ninth record? Do you put pressure on yourself to outdo yourself? Try new things?
I put a lot of pressure on making it a great instrumental record. It is really tough. There’s a lot of pressure to make it sound good, to make it hooky and flashy. I’ll train myself for weeks before I go into the studio so I can knock it out in an hour or two.

With lyrical content it’s easy to talk about themes. I’m sure it can be the same for you, but it may not be something that a lot of music fans understand. So, thematically how do you see Invasion connecting with people?
If you listen to it a few times in your car, there will be a connection. Like “Crank It,” I love shit like that. It’s hooky and there’s a lot of information. We perform this stuff exactly when we do it live. There’s so much going on. I love it. I’m just so happy I’m able to do this.

We’d love to know one thing you learned from a few of the individuals you’ve worked with over the years. Let’s start with David Lee Roth.
Diamond Dave was and still is my hero. He taught me a lot about songwriting. He taught me about discipline. He introduced me to old ZZ Top and old Rod Stewart. He’d give me these old records and tell me to just study them.

How about Trent Reznor?
Production. He’s another amazing songwriter. Nine Inch Nails is my favorite band still today, next to KISS. Nine Inch Nails was such a huge epiphany for me. It changed my life, it changed how I looked at music. He’s a genius, I really love him.

And you’re great friends with Nikki Sixx.
Nikki, he’s my best friend, we love each other. He has inspired me and taught me so much about life in general. He’s a phenomenal songwriter, lyricist, author, everything. He’s always telling me to listen to this audio book or see this movie. He has a happy marriage, a happy life, a successful band he started from the ground up. He’s one of the most inspiring people. He’ll text me all the time to read something or try something. It’s wonderful. He’s a phenomenal photographer as well. I remember him telling me that he’s going to take bass lessons again and get into playing with his fingers. He was so dedicated. We worked on The Dirt soundtrack together. When we went into the studio, he did it all with his fingers. Tommy Lee was like, “Look at you!” He’s just such a dedicated person. I loved the movie, it was killer.

Of course, we have to ask about Marilyn Manson and Rob Zombie.
Manson I learned about playing live, the stage show, keeping it entertaining, the production, etc. Same for Rob. He’s another inspiring person. This guy works harder than any guy I’ve ever seen. What he goes through to make these movies is jaw dropping. It’s so difficult. He is so focused. It’s unbelievable. I love hearing all these terrible stories he has to go through because nothing will knock him down. He will always get back up.

TOXIC HOLOCAUST: Back to the Future

EXHUMED: The Horror of It All