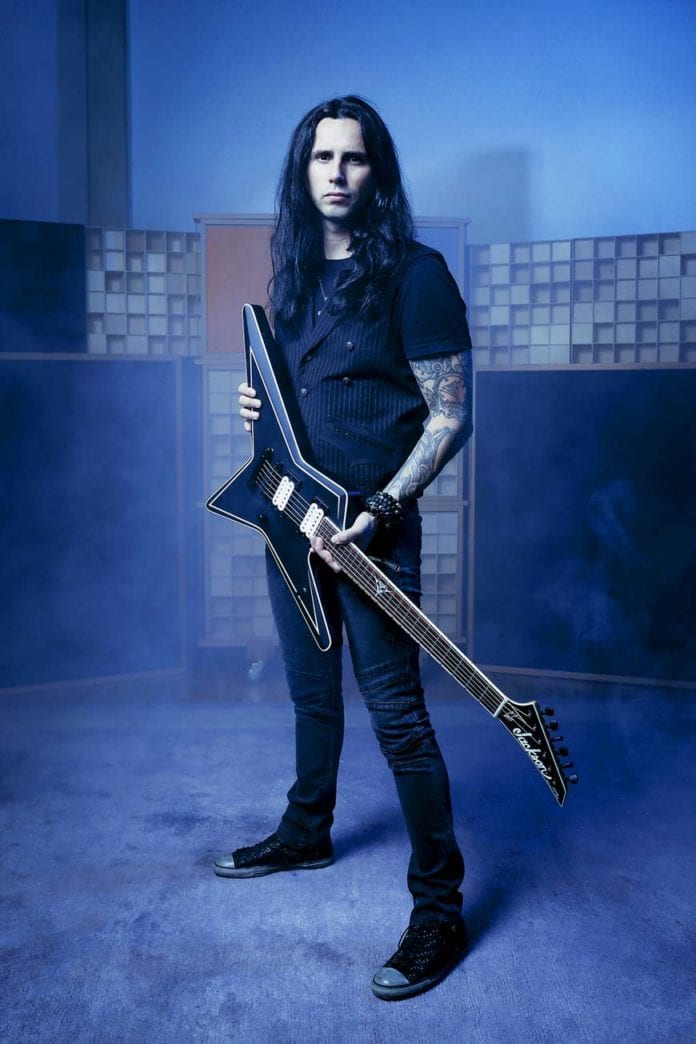 GREEK GUITAR GOD Gus G. was born to shred. Throughout his 20 year career, the six string axe slinger has performed with established acts such as Arch Enemy, Mystic Prophecy, and Dream Evil to his own band Firewind before landing his dream job playing alongside Ozzy Osbourne from 2009 to 2017. Now with Fearless, Gus G. (real name Kostantinos Karamitroudis), along with vocalist/bassist Dennis Ward (Pink Cream 69, Unisonic) and drummer Will Hunt (Evanescence, Black Label Society), continues his successful series of solo albums.

How did you decide to be a power trio for Fearless?
This is the first time I’ve been involved in a power trio setup. This was an idea that Dennis brought to the table. I’ve always been used to having a frontman, even though I’ve always been a semi-frontman myself—I don’t sing, but maybe I took up a lot of space on stage and did my own guitar thing. But the whole idea seemed like a natural evolution. We started out by writing songs, me and Dennis. We would send music, vocal lines, and lyrics, and then discuss all these things. Then when I was happy with where we were going and we were more or less done with the writing, we were like, “Now what? How’s this all going to go down? Should I do another album with guests?” I did that on the first two albums, and I thought it was cool to do that, but you can’t really settle on a singer who’s going to follow you on tour. So, Dennis said he can lend me his vocals and try this power trio thing and see how it works. It all came out of being a bit more convenient and trying out something different. When it comes to Will, he was on my list of top favorite drummers of who I would want to get if I was going to ask somebody to play on this record.

How did the writing and recording process go for Fearless?
Dennis and I co-wrote everything together. I wrote the music, and then I sent it to Dennis because I programmed everything in my home studio. Then he’d do vocal lines, and we’d talk about the lyrics. He’ll send me versions back, and we’ll complete the songs like that together. What I sent to Will was finished demos. Will flew over to Germany last summer, and he came in really prepared—he knew everything. We didn’t even need to have a real discussion about it. I was really blown away by what a pro he was. It only took a couple of takes for each song and that was it. He really nailed every detail. Then after that I went back and re-tracked my guitars in my studio back home in Greece. And Dennis has his own studio, and that’s where he mixed it and recorded his bass and vocals.

How does Fearless differ from your last two solo albums?
There are major differences in that the first two records are with various collaborations. There were different writers involved. The work was always the same—I would write the music in my home studio and then send it to different people. So, working with a different co-writer, everybody has different ideas, and that’s inspiring and really cool. Those records have different colors all over them. There’d be a glam rock song with Michael Starr from Steel Panther, then there’d be like a more mellow track or a classic heavy metal track with Mats Levin, or there will be something modern. But this record is more cohesive. It almost sounds like a band record. It’s called Gus G., but it could have been a band name.

“Letting Go” is a great start to the record. Was it the clear-cut opener?
This was one of the first demos I had. It’s one of the heaviest tracks on the record with drop tuning and has fast double bass parts. It’s one of the most heavy metal tracks of this record. I always felt strongly about that song, and it was one of the first songs I co-wrote with Dennis. I immediately knew this could be a possible opener or a first single. When I first sent it to him, my working title was “Darkness and Hope.” I don’t write lyrics, but I was telling Dennis that maybe we should write something about the two opposites. So, I think the lyrics are about that, about a person who goes to a dark place and then coming out of that. 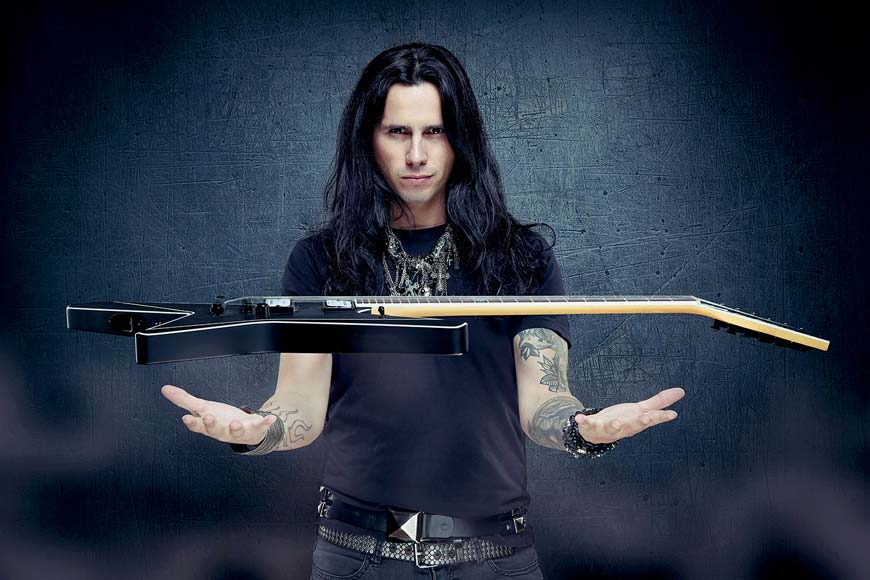 “Sometimes you just need to work with people with a new perspective and new ideas.”

Was “Mr. Manson” inspired by the recent death of Charles Manson?
That’s a total coincidence believe it or not. We wrote that song a year ago. And it was funny when the news came out that Manson died. We hadn’t announced the album already, but we wrote the song months ago. That was Dennis’ lyrical idea to be honest. I had this riff…it was one of the riffs I was planning on giving to Ozzy years ago and it was shelved. I got around to it again and started working on it and sent it to him and said the song sounds kind of Sabbathy. I think he got inspired by what I told him, about how I came up with the song. So, he said, “Ozzy has ‘Mr. Crowley,’ so we should do ‘Mr. Manson!’” When I sent him a text about it, he said, “Perry Mason was already taken!” (laughs)

How did you determine the instrumental tracks from the vocal tracks?
Sometimes there’s ideas that I write and I know that they’re going to develop into an instrumental. Sometimes instrumentals come out of necessity, like there’s just not a good vocal idea. In this case, “Fearless,” the title track, started out to be a vocal track, then I started adding all these ideas and riffs, and it became a track that just kept developing. Then there’s a main course melody. When I start piling up stuff like that, then I know it’s going to be an instrumental without a doubt. As regards to “Thrill of the Chase,” it was originally destined to be an instrumental. I wanted to do a Michael Schenker “Into the Arena” kind of track with a laid-back rock ‘n’ roll groove that has big melodies over that.

What made you decide to cover Dire Straits’ “Money for Nothing?”
It was an idea I had for a while. When I was thinking about doing this album, I thought I should record a cover. When I first started out doing solo gigs, I didn’t have enough material. I would do some covers from songs I liked. I would play some Thin Lizzy and Sabbath, stuff like that. I wanted to do a song that’s not an obvious choice. I know a lot of bands cover a lot of the 80s pop hits, and that’s done too many times. I wanted to do a song I loved when I was growing up, but give it another twist. I like Dire Straits. I love Mark Knopfler’s playing, and that’s one of the best songs he’s even done. I looked around to see if anybody else has covered it, and I didn’t find anything, unless I’m missing another version. So, I wanted to do this song, but a more modern, sludgier version and slow the tempo down in half and play the riff much heavier.

What made you release this record through AFM?
The last album that Firewind did for Century Media was Immortals. Except in the American territory, I licensed it to AFM in the States, but Century Media released it everywhere else in the world, and that was really the last album on my contract with them. So, I was looking for a new team to freshen things up. I’ve been with Century Media since I was a kid—I was 20-years-old and now I’m 37. Sometimes you just need to work with people with a new perspective and new ideas. I felt good when I met with the people from AFM. At the same time, I was looking for a new home for both my projects, both my bands. This is actually the first worldwide release for AFM, so I’m looking forward to what they bring to the table.