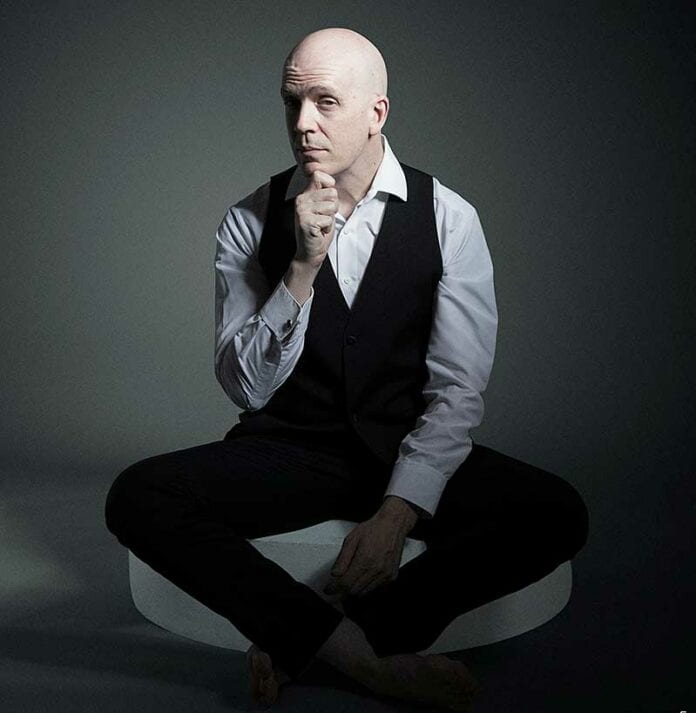 Everything Canadian oddball Devin Townsend touches turns to gold. From his nomadic beginnings as frontman for guitar wizard Steve Vai to industrial hooligans Front Line Assembly to the brutal Strapping Young Lad to the Devin Townsend Project and now with his current solo band, Townsend continues to walk his own musical path.

Townsend discusses everything from the theme of Empath to his friendship with Steve Vai to the album’s massive listening commitment to mental health issues.

Is Empath a true concept album or a running theme?
It’s certainly more of just a theme. Any time I’ve had a concept, it’s almost like you’re giving yourself lines to color within, more so than trying to make something for other people to participate in, in the same way as Tommy or Operation: Mindcrime or something like that. I think that Empath is a theme that goes hand in hand with where I was at as a dude, but also it was convenient in that it implies the existence of various emotions. And that way I could illustrate that with a ton of different musical dynamics. I didn’t have to just make it a metal record or a quiet record or a pop record. I tried to do it all in one place. That’s something I’ve been wanting to do for years.

Empath is your first solo album since 2014’s Z2: Dark Matters. What made you want to take a break from the Devin Townsend Project, and how does this album differ from anything from that band?
Even when I was doing Strapping, even when I was doing Devin Townsend Project, I still wrote most of the stuff, or 95 to 98 percent of it. So, the process on that front is not much different. But how it differs is, when you are committed to a group of people in a band scenario, there are very narrow parameters of what you can achieve with a rock band, no matter who you are. The ideas that I’ve had over the past few years were such that I felt limited by it, and I really felt it was necessary in order for me to not only make something that I was emotionally committed to, but also just interested in, to just break off and have no limits like that of a rock band. It’s the best decision I’ve made in dozens of years—it really helped me connect with it. And even in the very beginning, I was aware of the fact that being this kind of “free” with my musical stylings would potentially ostracize some of the fan base. But really early on in the process, I committed to that being as something that I was okay with. That also helped.

“GETTING THOSE KINDS OF FEARS OUT OF THE WAY MADE THE PROCESS EASIER. IT WAS CERTAINLY NOT AN EASY ALBUM TO MAKE”

Empath takes a big listening commitment at 75 minutes in duration. We’re you concerned about the length of the album, or is it just what it took to make it?
It’s what it took to make. And in the same way as I committed to some people maybe not having the patience for it, I also committed to the fact that if a song needed to be 23 minutes for me to get my point across, then it needed to be 23 minutes. If I wanted to do some death metal bits, I would do death metal. If I wanted to do musical theater, I’d do musical theater. And getting those kinds of fears out of the way made the process easier. It was certainly not an easy album to make, but it could have been much harder if I had not let that go early on.

When you were 19, your first album was Steve Vai’s Sex and Religion, which is now 26 years old. You’ve obviously remained friends, as he appears on Empath with a guest solo spot on “Here Comes the Sun.” How’s the camaraderie between you two?
Steve and I are great friends. I think we’re different enough that we’d never potentially be on the same page about everything. I think the thing that makes relationships work a lot of times are the differences, specifically if you’ve got the fundamentals in order, which we do. Steve’s brilliant, man.

“EMPATH ACTS AS A DESCRIPTOR OF HOW I FEEL IN GENERAL RIGHT NOW, WHICH IS, LIFE IS CRAZY, LIFE IS CHAOTIC, LIFE IS TIRING, LIFE IS SURPRISING.”

Mental health issues are a big topic these days. You were diagnosed as being bipolar in 1998 and were prescribed antipsychotic meds. What’s your mindset these days?
I think like most of us, it’s up and down. But for the most part it’s pretty good. I think that it’s been a lot of years of me learning about myself, learning how much of my diagnosis of being bipolar was actually that, versus the drugs I was on at the time. Through that comes a certain amount of embarrassment, but I think that Empath acts as a descriptor of how I feel in general right now, which is, life is crazy, life is chaotic, life is tiring, life is surprising. Life doesn’t do one thing, it changes all the time. But ultimately, summoning the strength to work your way through it is in a large part a byproduct of recognizing that other people are doing the same thing. So, I take a lot of solace in that, and I think I’m doing pretty good.

Is this realization what you’re referencing to on the track “Spirits Will Collide?”
Yeah, but I don’t think I’m trying to say it in a sense like I’m trying to instill hope in people like that through self-help or a life coach kind of thing, which I find loathsome in a lot of ways. I think what I’m trying to say is, if other people aren’t giving up, that means that it’s within us to do the same. And I think I’m taking my inspiration from the fact that I see other people in my life, sometimes people who have a much harder loss than I, that are still finding the strength to get through it. And I think that’s what “Spirits Will Collide” ultimately is referencing—although it’s difficult, it’s very much within us to look around and see that other people are fighting as well, and there’s some strength to really be taken from that.

It’s an odd but pleasant surprise to hear Chad Kroeger from Nickelback appear on “Hear Me.”
I met Chad prior to writing Empath, and we ended up spending some time together. And I was in a position where I was privy to his world and how intense it is. I think a lot of times most people think of people who have vast amounts of wealth or power and think, “Oh, my life would be much easier if only I had that.” But you see what comes with it, too. Nothing is for free, and the choices that one makes to do these things, it brings with it a certain cause and effect. Chad is a very intense person and he has a very intense mind, yet he has found success in his life and he has found what he wants out of life in a lot of ways by being true to who he is. And being true to who he is, has unfortunately caused a lot of people to really be critical of him. And I think that it was really good for me to see somebody who’s taken measurably more shit than I’ve taken, still managing to keep his head above water. I took a lot of inspiration from that. In fact, prior to that meeting I think I had toyed with the idea of making a more commercial radio album, and seeing him I was like, “Fuck it, I got to do what I got to do.” And it was really inspiring. So, having him on “Hear Me” seemed like the least likely song for Chad to be on, and I found that to be artistically interesting. He’s more metal than all of us put together. His life is heavy. I couldn’t handle that. No wonder he’s got boats and planes and everything. He’s got the psychology to be able to handle that level of intensity. No thanks, dude!

With all of Empath’s parts, how did you go about piecing the song sequence together, and was there a lot of second guessing yourself?
Part and parcel of making a record is second guessing yourself up until the deadline. And then you just have to abandon it and hope that your intuition guided you in the right direction. Sometimes it does and sometimes it really doesn’t. But I’m proud to say with Empath, the decisions that I made blindly a lot of the times were rooted in me trying to achieve an emotional result that at least I was aware of, and I think it really worked. As complicated and disparate as a lot of these songs are, there was a real goal in mind of trying to achieve something, that by the time the last note reverberates off in the ether there, you’re left with a certain feeling. And I feel that I achieved that. “Great success!” [Townsend says in his best Yoda voice].