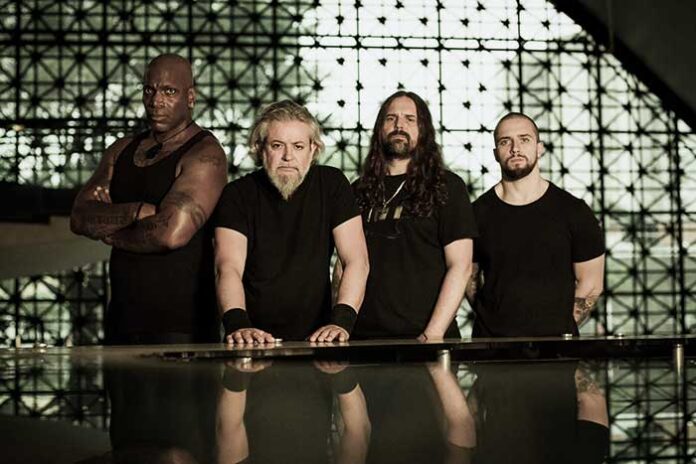 Brazilian groove/thrash metal band Sepultura has carved out an extensive 37 year career with several well documented ups and downs. The four piece band—featuring vocalist Derrick Green, guitarist Andreas Kisser, bassist Paulo Jr., and drummer Eloy Casagrande—has been putting out some of its best material in the past several years.

After you joined Sepultura in 1998, you moved to Brazil to be closer to the rest of the members. As an American living in a different country, was there much of a culture shock? What excited you about living there?
When I joined the band in 98, we were doing a lot of studio work and recording our first album in different places. I ended up leaving New York and moving to Brazil two years into the band. Once we were done touring and we started to work on the second album, that’s when I decided to move to Sao Paulo. I lived there for almost 20 years, then I moved back to the US only a few years ago to Los Angeles. At a very young age, I was very curious about other cultures, countries, and languages. When the opportunity actually came to move there, I had no problem with it, because I really fell in love with Brazil the first time I ever went to do my audition and I really wanted to have that experience. It was kind of a culture shock, but not really. Sao Paulo is a massive city. What’s shocking is the fact that it’s bigger than any city in the US and one of the biggest cities in the southern hemisphere with over 20 million people living there. It’s intense, it’s a concrete jungle. It was shocking with the massive size of it and everything that’s going on. I got used to it pretty quickly. I was rather young back then when I joined the band so I had a lot of energy. I really wanted to see the whole country, the whole city, and just really dive right into it.

SepulQuarta initially started as an in-studio, weekly video series during the pandemic. Did you know that this would eventually become an album?
It really came about after we had the recordings and we were listening to them. We became better at producing the Wednesday SepulQuarta sessions, as far as using all the technology, but we were really surprised at the quality and how natural it came out. The songs actually changed having these different incredible artists play on these songs. It gave a different feeling to the songs, and that’s when we realized once we had everything done, we thought we should put this out as an album. There was a lot of people that may not have heard us doing this every Wednesday and it would be a treat for Sepultura fans to have an actual album or CD where they could reminisce on the time when everyone was locked down. It was something we were doing that was very special in the moment that was really positive and trying to keep that connection with the fans.

“ONCE WE HAD EVERYTHING DONE, WE THOUGHT WE SHOULD PUT THIS OUT AS AN ALBUM.”

It’s a well balanced tracklisting, with older, mid-period, and newer tracks. How were these songs picked?
We definitely brainstormed the ideas and passed them by each other. We liked picking out songs that we didn’t necessarily do live all the time, and certain songs we knew we wanted specific people. For example, “Orgasmatron,” we wanted Phil [Campbell, Motörhead], of course, because he was part writer on that song and it just made sense. I think it was really just the moment. It started as us as a band getting together on Wednesdays and thinking of who we could get or which song we could do or who we could ask. It was just in the moment with not a lot of overthinking. It was spontaneous.

“DIVERSITY IS REALLY WHAT HAS MADE SEPULTURA SUCH A STRONG BAND.”

There’s a lot of prominent Brazilian musicians that perhaps more mainstream Sepultura fans aren’t too familiar with. For example, “Ratamahatta” features Brazilian drummers Joao Barone and Charles Gavin. How were these two percussionists selected?
We definitely wanted to have that balance of Brazilian musicians. We wanted to do classic Sepultura songs with older Sepultura songs and the newer songs, and have that diversity. Diversity is really what has made Sepultura such a strong band. We wanted to showcase the musicians that had a big impact on the band. Especially with Charles Gavin, who was an original member of Titãs, that band wrote the song “Policia,” which Sepultura covers.

“Hatred Aside” features Fernanda Lira of Crypta, Angélica Burns of Hatefulmurder, and Mayara Puertas of Torture Squad. How did this idea come to you to use all female vocalists?
We definitely wanted to show the representation that the metal scene and the rock scene in Brazil is very strong, and there’s definitely more women getting involved, which is making the scene more interesting. The quality that these women are doing is incredible. We already had Emmily Barreto, who performed a song on our last album Quadra (“Fear, Pain, Chaos, Suffering”), and we wanted to record with her as well, so we did a song with her, the song we did on Quadra. And the other women are doing more of the thrash oriented style of music. We decided that it would be great to have them on the song “Hatred Aside” because it was originally sang by Jason Newsted, Andreas Kisser, and I. There were three different parts we were switching around and we thought it would be cool to have these three women vocals on there because they have very different voices to bring something new to it. And that’s exactly what they did, they really put their heart and soul into the song. Then when I heard it, I felt that they made the song better than the original in a lot of ways. It’s definitely one of the most popular songs that we did on SepulQuarta. It really gave new life to that song and it’s one of my favorite songs.

What are your favorite reworked tracks and why?
When I go through the songs every now and then, it switches. I’d say “Hatred Aside.” I would say “Mask” with Devin Townsend, which is very unique. He put so much of his own personality into it. Again, that’s another song that takes on another form. I really love the version of “Cut-Throat” with Scott Ian. He’s got such an amazing hand for playing guitar and I’ve always been a huge fan. Those are the three that really stick out to me.

The majority of Sepultura fans are some of the most opinionated yet passionate fans around. In fact, maybe sometimes even a pain in the ass when it comes to each new album. And those fans that still haven’t given you a chance after 20 years as the frontman (outlasting Max Cavalera’s tenure by 10-plus years) are missing the boat. What’s your thoughts on that or does it even enter your mind anymore?
I agree. They’re definitely missing out on some great music and the evolution of the band. I’m proud of the entire history of Sepultura. I love every aspect of it, even before I was in the band. To me, it completes the whole picture, the testament of time, and how we were able to stay relevant even today. The creativity and everything has come from those battles and situations that have made us want to be better. I think it’s important to have those, what we call haters or whatever. I think they’re as important as well. They have actually added character to the band and the determination for us to stay together. The objective of the band is not to make everyone happy. That’s an impossible task to go out and make every fan of yours happy, but it’s really cool when people are very honest when they actually start to listen to our stuff and the repertoire that we have and realize that they missed out on it and didn’t realize it was going in this direction. “I wasn’t a fan at first but now I am.” I love hearing that and I’ve had that happen with me with certain bands. It’s up to the fans and I’m definitely okay with it. I’m used to hearing so many different opinions because there’s so many different generations of Sepultura fans. But at the same time, I don’t let it determine the direction that I’m going to go or anything like that.

“I’M PROUD OF THE ENTIRE HISTORY OF SEPULTURA. I LOVE EVERY ASPECT OF IT, EVEN BEFORE I WAS IN THE BAND.”

Sepultura is still a thrash metal entity that has survived for 37 years. What’s your future plans? Will you start a new album, or are you planning a belated Quadra tour?
Definitely a belated Quadra tour is needed because we’ve always done an album and toured the world for at least two years. A lot of people have had time to listen to Quadra and get used to it for almost two years. We definitely need to go out and play those songs live, get that feedback and reaction, and give that energy to the fans of playing those songs live along with the classics and have a really good tour. We have planned November/December for Europe with Crowbar and Sacred Reich, and also the same lineup in North America starting in March/April of 2022. And then we’ll move on to festival tours in Europe, then take on the rest of the world and play as much as possible. Our main focus will be to tour.

MOMS THAT ROCK: An Interview with Sandy Hittesdorf, Mother of Ash...

POSSESSED: Light in the Darkness