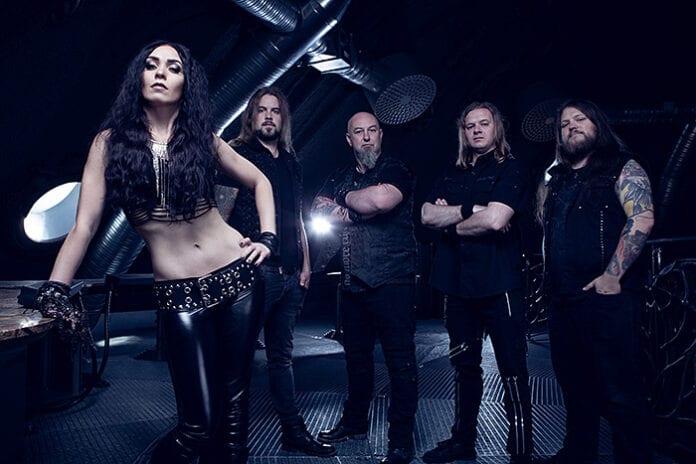 On Crystal Viper’s eighth full-length album, The Cult, what were you focusing on the most during the writing process?
With The Cult, the plan was easy. We decided to work on the new album instead of sitting at home and doing nothing. When the pandemic began at the beginning of last year, it became clear that we won’t play live shows and won’t travel at all. We wanted to stay active as a band, as musicians.

Did you feel that the band’s sound was getting away from its original classic heavy metal roots exemplified on your early records and wanted to get back to that sound on this album?
I think that every Crystal Viper album is a heavy metal album, but each of them contains different elements, like elements of power metal, hard rock, or even thrash metal. It all depends on the inspirations at the moment, because they are different every single time. With this album, as you can hear, our inspirations were very classic. Bands like Iron Maiden, Judas Priest, and Black Sabbath have always been our metal heroes. I would say we returned to the center of what Crystal Viper is all about.

“EVERY CRYSTAL VIPER ALBUM IS A HEAVY METAL ALBUM, BUT EACH OF THEM CONTAINS DIFFERENT ELEMENTS”

Your King Diamond cover, “Welcome Home,” is such a perfect track for your voice. How did you get Andy La Rocque from King Diamond to do the guitar solo, and how difficult was it to pull off King’s vocal range?
Andy is a friend of ours for many years. He actually co-produced one of our earlier albums. He’s one of the most talented and underrated guitarists I know and an absolutely lovely person. It was a huge honor for us when he agreed to join us on “Welcome Home.” I think it was an interesting experience for him as well, as he has been performing this song with King Diamond for more than three decades, and now he was asked to record a new solo for a new version of this song performed by someone else. Vocally, I would lie if I’d say it was difficult for me to sing it. It was more about trying new things within my voice and to learn new stuff. King Diamond’s vocal range is very wide. I had to control my voice more than usual to achieve the final effect that I had in my head.

Please explain the killer cover art by Mario Lopez and how the concept/theme ties in with the album title and lyrics. Did you give him much direction?
We had a very specific idea for the cover. We wanted it to be a classic looking heavy metal art, like in the 80s. We wanted it to refer to the concept and the atmosphere of the album, and we wanted to be sure that fans of H.P. Lovecraft will also know what it’s all about. Mario did an amazing job. You can even see members of the band in this painting if you look closely. One more reason to get this album on vinyl, it looks even better when it’s big.

“WE WANTED A CLEAR, CLASSIC HEAVY METAL SOUND, WITH A LOT OF SPACE AND WIDE DYNAMIC RANGE”

Your husband Bart Gabriel produced the album once again and the mixing was done by your drummer Cederick Forsberg. Did you discuss beforehand the type of sound you wanted or a different approach compared to previous albums?
We were discussing the sound of the album before the actual production started. We wanted to be sure we’re all on the same page. We knew we wanted a clear, classic heavy metal sound, with a lot of space and wide dynamic range so it doesn’t sound flat. But at the same time, to make the sound fit the 21st century. I love the final result, Bart and Ced did a great job.

The title track best exemplifies the band’s classic core sound. Do you agree, or is there a different track that encapsulates everything about the band?
The title track, “The Cult,” in my opinion is quite representative when it comes to the music that you will find on the new album, and that is why we decided to use it as the first single. But honestly, I think the entire album is the essence of Crystal Viper, and it shows off what’s musically best in us.

With the band being geographically spread out, how did the recording process for The Cult go?
It’s the first time in the history of Crystal Viper that we recorded the album without seeing each other, without working together in the studio. I mean, we were in constant contact. We exchanged thousands of emails, messages, and calls, then we were sending all the tracks between each other, but we haven’t met all together. Members of Crystal Viper live in three different countries—Poland, Germany, and Sweden. And it was and still is impossible to travel without the risk of being quarantined. For the same reason, we couldn’t do new band photos or film a proper music video with all of the band members.

Is there more material to be released soon, even this year? Has the pandemic at least made it easy to focus more on writing?
That is true. We started working on something interesting right after The Cult was ready. And it’s not only one thing! Keep your eyes open, cool news will appear on the horizon very soon. Regarding the pandemic and songwriting, well, composing songs and recording the new material is actually the only thing that we can do right now. Crystal Viper is a super active band since the very beginning, and we like to stay busy with music. We can’t play live, so we record new music.

“COMPOSING SONGS AND RECORDING THE NEW MATERIAL IS ACTUALLY THE ONLY THING THAT WE CAN DO RIGHT NOW.”

You were previously signed to AFM Records for a long time, and The Cult is your first record on Listenable Records. What led to the change?
Our contract with AFM Records simply expired, and we agreed it will be better to not extend it. AFM Records is more into modern power and melodic metal, while Crystal Viper always been a classic heavy metal band. I mean, I’m aware that some of our songs could be labeled as power metal, but we always felt we belong to classic heavy metal circles. Our new album, The Cult, is a piece of traditional and classic heavy metal, it wouldn’t fit the AFM catalog anymore. When we started to work on The Cult, we decided to firstly finish the new album and then to find the new home. Joining a new label is like getting married and joining a new family. We are very happy with Listenable Records as they understand what Crystal Viper is all about, and they are passionate about heavy metal. Regarding distribution, they will do the best they can, but the truth is that these days most people buy online anyway. I can see music stores physically disappearing. So the truth is, you can buy our album online no matter where you are from.

After 18 years of Crystal Viper, do you feel that you still have the same drive and determination? And how important is it to stay true to yourself and this style of metal?
When I was seven-years-old, I told my parents that I want to be a musician, that I want to play, so they sent me to music school. I’m 36 now, and nothing has changed since I was seven. Music is the air that I breathe every single day. I’m always true with myself when it comes to music, because music should bring you joy and happiness, and that can only happen when you play music that you love.

“MUSIC IS THE AIR THAT I BREATHE EVERY SINGLE DAY. I’M ALWAYS TRUE WITH MYSELF WHEN IT COMES TO MUSIC, BECAUSE MUSIC SHOULD BRING YOU JOY AND HAPPINESS”

Due to the ongoing pandemic and no tours have been scheduled for the foreseeable future, what will you be focusing on next?
We need to focus on promoting our new album, The Cult, as well as get our additional projects done. This will take a couple of weeks. And when they are ready, we will surely come out with the next ideas for creating even more music. We’re unstoppable, we want to do more and more metal!

SUM 41: Everything Just Falls Out