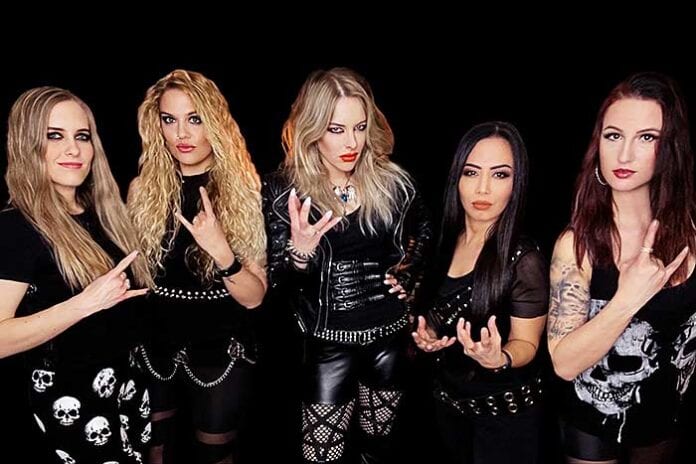 Swiss all-female, classic heavy metal quintet Burning Witches has been on a tear lately by releasing four full-length albums in six years. On the band’s newest Norse mythology themed opus, The Witch of the North, the band—featuring bassist Jeanine Grob, drummer Lala Frischknecht, Dutch vocalist Laura Guldemond, and guitarists Romana Kalkuhl and Larissa Ernst—executes some great storytelling and tight compositions on its 14 tracks, including a fantastic bonus cover of Savatage’s “Hall of the Mountain King.”

Speaking with vocalist Laura Guldemond, we discovered that she has many pets at her home in the Netherlands, as well as a lush Japanese styled garden in her backyard. During the global pandemic, the Dutch singer has kept herself busy by taking care of all her critters, recording cover tunes, and broadcasting her YouTube vlog, Borona Garden, which has become quite popular with her fan base.

Burning Witches has been quite prolific since its 2015 formation and is back with its fourth full-length album in six years, The Witch of the North. How have you been able to keep up this pace of recording?
I always want to say that I am surprised that people are surprised about it! (laughs) It’s possible, you just have to go and do it. Starting something is the most difficult thing to do sometimes. But there are also people who write songs everyday because they like doing it and they keep on doing it because they enjoy the flow. They probably write a hundred songs a year. You just sit down and you do it, and if you know how to have a good workflow, it’s really possible.

What does the album title, cover art, and song titles/lyrics signify? What were you trying to achieve with these new tracks and what was the songwriting process like?
We decided to do a theme based album again like we did on Hexenhammer. At some point Romana was just noodling a bit on her guitar, and she had this riff that really reminded her of Viking metal, like Amon Amarth. Then she said, “Hey Laura, write me a song about The Witch of the North.” I was asking, “Who is The Witch of the North?” And no one had a clue, so I was really looking for something that would make sense. It turned out to be a goddess in Norse mythology that gives the power to witches to see into the future. So, this is the cool part because then it all made sense. I really drew the inspiration from Norse mythology. I really love doing that because there’s some pretty metal stories in there that fits the music. If you know what you’re writing about, it makes it a lot easier on yourself.

“BECAUSE THIS ALBUM AND ALL THE STORYTELLING AND THE MYTHOLOGY IN IT, IT CERTAINLY HAS SOME OF THIS MYSTERIOUS LIFE AROUND IT”

Burning Witches has always had great artwork on its album covers. Gyula Havancsak created the last three covers, but this time you commissioned Chilean illustrator Claudio Bergamin (Judas Priest, Battle Beast, Mordred). How did this come about?
We knew he did an awesome job with Firepower [Judas Priest] and with Battle Beast. And I think Gyula was for some reason not available, because we were also very happy with what Gyula did. But Claudio did a very cool job. I really love what he did with the Freyja on the front. You can see the new life parting and also this ball of energy in her hand. She is the goddess of love and war. It shows both in a really mystical way, and because this album and all the storytelling and the mythology in it, it certainly has some of this mysterious life around it that this album cover shows.

The album was produced by famed Destruction bassist/vocalist Schmier, who is also your band manager and produced all of your previous records. What’s the experience been like working with him?
He’s super involved with what we’re doing. With producing, he’s a really nice guy to have because—obviously in Destruction he’s playing an instrument and he’s singing—he knows both sides. He’s really good at understanding how to get the best out of the song. When he hears the songs in the studio, sometimes he hears them for the first time and it gives him a really fresh view on the songs to get the best out of it in the studio. So, that’s really useful and we’re happy that he’s part of that process.

“THIS IS ALSO ONE OF THE HEAVIEST ALBUMS WE’VE DONE.”

How has new guitarist Larissa fit in with the band, and what did she bring to the writing and recording of this album?
It’s cool that Romana and Larissa actually recorded their guitars at home and sent it over for Schmier to do whatever he thought was necessary. They also recorded a lot together, because it’s just a bit easier obviously if you live in the same city. What I like about Larissa’s playing, it adds some heaviness because she plays so laid back. This is also one of the heaviest albums we’ve done. She’s trying to adjust a little bit to the Burning Witches sound, so I wonder how much she’s changed since the first time we played. She does have a way of writing solo lines that really draws the song to a certain feel and that’s actually pretty cool, but I think we could do a bit more with it on the next album.

On your last album, you recorded a fantastic cover of Manowar’s “Battle Hymn.” This time you perform a splendid version of Savatage’s “Hall of the Mountain King.” What was it about this track that made you want to cover it?
I’ve been doing a lot of cover songs and putting them on YouTube. I was actually looking for a cover to do myself, then I saw that one and it’s one of my favorite songs ever. So, when I was thinking about doing it, I thought we should do it in Burning Witches, because it’s “Hall of the Mountain King,” and we already had a song with mountains in it. And obviously, we’re using the snowy vibe, or the Nordic vibe. It also really fits the epic storytelling thing we have going on for this album. It’s a really dynamic song that tells a story of the mountain king. It was perfect, I proposed it to everyone, and they were immediately super enthusiastic because they were looking for a good cover song at that moment.

“THE FUN THING IS, WHEN EVERYTHING ENDS, IT GOES BACK TO THIS COLDNESS AND NOTHINGNESS.”

What other tracks on the album are you most proud of or that really stand out for you?
I personally really love how “Nine Worlds” turned out, because it’s one of the most storytelling tracks. We have an extra short intro before it called “Omen,” so obviously you’re expecting bad things to happen. Then the nine worlds fall and Ragnarök happens. I just love to look into that story, they actually believed it was a continuous cycle. So when the world would begin actually, one of the first creatures around were frost giants. I don’t really get that logic, but I love the fact that they believe that there’s a cold period with nothing, then these frost giants existed, and from that the whole world evolved at some point. After those nine worlds were gone, this dragon burns everything. It’s pretty metal and you can put all that into music and lyrics. The fun thing is, when everything ends, it goes back to this coldness and nothingness. And we begin and we end the album with that. That’s the funny thing, because it’s like a cycle for them. They don’t believe it really ends, they believe this whole world will start again after a period of time where there’s this coldness and nothingness. Because of that, it’s one of my favorite songs on the album.

My favorite song on the record is “The Circle of Five.” What’s the meaning behind it?
It was because Larissa was new in the band and we have a lot of traditions by now. When something happens, we want to do something for the fans to let them know that we’re still a band and that everything’s okay. And this was one of those moments. “The Circle of Five” was to say that we’re a circle of five again and the band is okay. I enjoy this song and I really wrote it about the band. In the song, we’re flying above the mountains as witches. I just let my imagination go a bit, but it’s about the band’s spirit.

As the singer in an all-female metal band, what do you think of the ongoing debate about the “female-fronted” moniker?
That’s funny that you say that. It affected my previous band [Shadowrise] because we did more symphonic stuff. We totally got into this female-fronted metal scene, so we were attracting the epitome of the female-fronted metal fan. This is kind of part of that scene, obviously, because it’s the aesthetics too that come with it. There are people who get really drawn to certain sounds of the female voice. It is a different scene. I wouldn’t say it’s a genre, but it’s definitely a scene. What people have been saying for a long time in this scene, they say if you want to discover new fans, you have to play with bands that are not in this scene. You won’t discover any new fans because it’s a scene. It’s just a group of people who always meet up. I think it’s useful for those people to call it that, but it’s a little bit less useful for the more genre oriented people. Especially now it would be a little bit out of place, because most people expect symphonics when describing female-fronted metal. And we’re not that, we’re just old school metal.

What will Burning Witches be focusing on for the rest of this year?
That depends on the world developing around us. We expect to do tours again next year, hopefully starting in winter. We hope to do a little more gigs, but probably stand-alone gigs. You can’t really do a tour if not all countries are vaccinated.