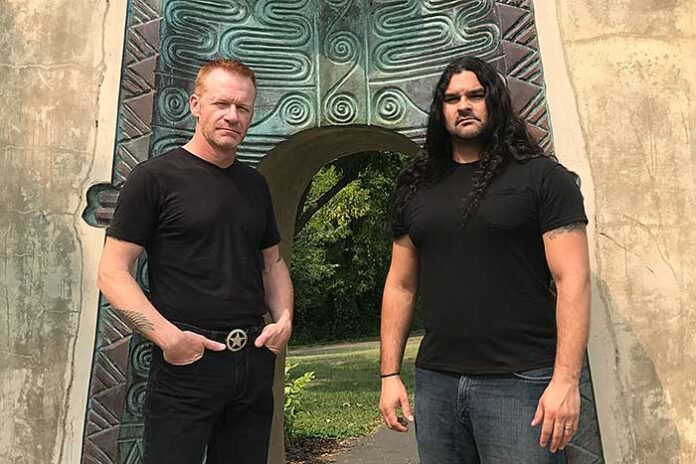 Heavy metal duo, Ashes of Ares, consisting of ex-Iced Earth alumni—vocalist Matt Barlow and bassist/guitarist Freddie Vidales—has created a project that they can truly call their own. Formed in 2012 with the impetus of starting fresh after both musicians left Iced Earth, Ashes of Ares has carried on its brand of heavy power metal with honesty and passion for the genre.

Naturally, there’s still a few Iced Earth-isms to the music Ashes of Ares creates, given that most metal fans will undoubtedly associate the duo with their former outfit. However, the compositions and songwriting is slightly different from their former band, allowing them to take their creativity wherever they want. Obviously, people are going to have their own opinions of Ashes of Ares, and the band will probably forever have to defend themselves for not being Iced Earth.

“WE’RE TRYING TO MAKE THE BEST MUSIC THAT WE FEEL IS RIGHT AND WHAT MAKES US FEEL GOOD AS SONGWRITERS.”

“I was the voice of Iced Earth for several records, so obviously my voice isn’t gonna change so much,” Barlow explains during a recent Zoom interview. “I do some different things, but it’s not because I’m trying to not sound like Iced Earth. John [Schaffer] was the main writer in Iced Earth, whereas, in Ashes of Ares, that’s my gig. So, I can do different things and try different stuff. Freddie’s not John Schaffer, so he’s not writing songs like John writes. Freddie trusts my opinion on things and I trust his opinion on things. We’re trying to make the best music that we feel is right and what makes us feel good as songwriters.”

Barlow joined Iced Earth for its third full-length album, 1995’s Burnt Offerings, creating a different and unique dynamic that the band couldn’t quite achieve with its previous two singers. “Starting out with Burnt Offerings was a weird time because it was a tough time for the band with the transition—me being the third singer,” Barlow says. “John was having issues with the label at that point, Century Media, and just a whole bunch of different things. The record itself is pretty dark and the vibe at that point. It was like a long honeymoon period, as far as me getting the gig.”

Coming off the heels of the aggressive Night of the Stormrider record, which received heaps of praise in Europe, Barlow felt like he had a lot to prove, not only to John, the band, and its fans, but mostly to himself. Barlow left Iced Earth in 2003 to become a police officer, much to the displeasure of many fans, paving the way for former Judas Priest singer Tim “Ripper” Owens” to take over the vocal position.

After a short stint with Danish progressive metal band Pyramaze (recording only one album), Barlow rejoined Iced Earth for a second time in 2007. “John contacted me and said things weren’t working out with Tim and would like me to come back to the band on a temporary basis” Barlow states. “Things went well with Iced Earth as far as doing it as best we could. I did a lot of shows and things like that. And that was my first time meeting Freddie. We were touring, and Freddie and I became really good friends. Once Iced Earth got to a point where the band needed to tour more, I couldn’t do it anymore. I wasn’t able to commit and I wasn’t going to give up my law enforcement career and the time spent with my family.”

“IT SEEMED LIKE A PRETTY GOOD IDEA TO GET TOGETHER IF WE WANT TO STILL DO MUSIC.”

Barlow stepped down once again from the Iced Earth vocalist position, which led the way for Into Eternity vocalist Stu Block to take over for him. But after he left Iced Earth for the second and final time in 2011, he realized that his love for writing and performing music wasn’t over. “Shortly after, Freddie got out of Iced Earth, because he was in a similar boat. He has a career as well—an engineer,” Barlow explains. “He couldn’t tour as much as John needed to tour to keep the band alive. It seemed like a pretty good idea to get together if we want to still do music. We started writing some music. We had several songs pretty much in the can the way we wanted them to be. One thing just led to another and that’s how the first record was done.”

For the band’s third full-length album, Emperors and Fools through Rock of Angels Records, the writing process began almost immediately after 2018’s Well of Souls. Although the global pandemic didn’t affect the album’s creative timeline, it did push back the release date. “We had the whole record written and recorded in 2020,” Barlow says. “We just weren’t able to get into the studio to do the final mix and mastering, which Freddie did in Phoenix in January of last year. The record has been completely done for an entire year.”

The musical approach the band took for this album, which also includes the amazing skills of ex-Nevermore drummer Van Williams, happened very organically. The songwriting is more epic this time around with a darker tone and a majestic vibe. Case in point, the massive 11-plus minute album closer “Monster’s Lament,” featuring Tim “Ripper” Owens as guest vocalist, is one of the heaviest and fastest tracks on the album. A track featuring a duet with two former Iced Earth vocalists doesn’t get any better than this.

“This is Freddie’s song and Freddie’s lyrics, so he knew where he wanted the characters to be,” Barlow explains. “We’ve got two separate characters here that we’re playing. We didn’t really restrict Tim on being Tim, and we didn’t want to. We wanted him to be himself, to understand the character that he’s playing, and really play into his strengths as a vocalist. You have a song that I think plays to both of our strengths with two totally different performances, which gives you two totally different characters. It worked out really well on several levels.”

As far as touring goes, Ashes of Ares has only been on one small Southwest tour in the nine years the band has been together. With families, successful careers, and a minuscule budget, the chance to do major tours isn’t in the cards for Ashes of Ares at the moment.

“Because we can’t do the band full-time, it’s really tough,” Barlow concludes. “We have to really pick and choose what we do and when we do it. That tour we did out in the Southwest, I had to incorporate that into my family vacation fun. And my family went with me because it just made sense. I still love playing live, and as long as folks like hearing what I got to do and I can produce some records and put them out there for folks, I’m happy to do it. It’s not a money making proposition for me, this is just pure love.”